The rise of young adult singledom

Fewer young people are saying, “I do” to any type relationship. Over the past decade, fewer and fewer young adults age 18-29 are getting married. From a high of 32% married young adults in this age group in 2005, the percentage has dropped in half to 16% in 2014. Meanwhile the percentage living with a partner out of wedlock has remained steady. The result is the share of singles/never marrieds in the 18 to 29 age group has grown from half (48%) in 2005 to almost two-thirds (64%) in 2014.

College graduates are more likely to be in some type of relationship with only 55% being single/never married in 2014 compared to 66% of less-educated young adults. A higher percentage of democrats are single (69%) than republicans (60%). Independents fall in between at 64%. 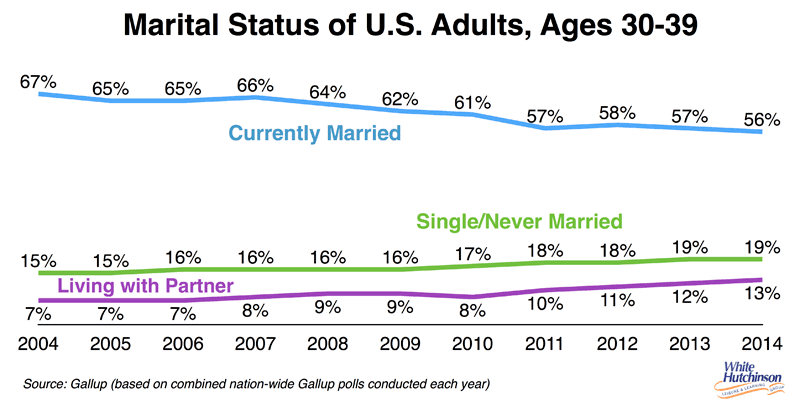 These findings from the Gallup Poll Social Series annual surveys are consistent with recent findings from the Pew Research Center that observed after decades of declining marriage rates, the share of American adults ages 25 and older who have never been married was at an historic high of one-in-five (20%) adults in 2012 compared with a one-in-eleven rate (9%) in 1960. The Pew analysis suggests that when today's young adults reach their mid-40s to mid-50s, a record high share of roughly one-quarter is likely to have never been married.

What all this means for restaurants, family entertainment and location-based leisure centers is that singles are a growing and significant market segment that needs to be addressed. For many businesses, this requires rethinking business strategies and marketing that in the past may have been heavily focused on married couples and families with children.

The growing number of singles is probably a contributing factor for the rise of food and drink festivals (see article this issue). These special events give single friends and dating couples an out-of-home opportunity to get together and socialize while sharing an adventurous experience centered on everyone's love - eating and drinking.