Staying healthy on the road
In my many millions of miles of travel throughout the world, I have never gotten sick. I have a good immune system (probably due to eating dirt when I was really young), but still I do follow some basic precautions to avoid those nasty germs and viruses that can do you in on a trip, especially ones that exists in other countries you may never have met up with before. I thought I'd share a few travel health tips with you:

Trip to Vietnam
I just completed my eleventh trip to Vietnam for our Helio Center FEC project there in Da Nang. The trip is over 13,000 miles round trip, equivalent to traveling half way around the world. It takes over a day one way, including 18.5 hours actually up in the air flying.

The project opened in February and this trip was for a post-opening evaluation and consultation with our client. The center is doing good business and will improve as our client gets further up the learning curve on operations and marketing that work best in that culture. Summer is actually a very busy time for the FEC due to the influx of summer tourists, both from other parts of Vietnam as well as other Asian countries including Korea and China. We're getting a whole collection of photos from Helio Center that we will share with you in the next issue.

When I travel to overseas locations, I make it a point to never eat American food, but rather take in the local culture by eating the native cuisines. And that is exactly what I've done on every trip to Vietnam. One food I learned to eat and enjoy in Vietnam is Phở or pho, a Vietnamese noodle soup consisting of broth, linguine-shaped rice noodles called bánh phở, a few herbs, different greens, and meat, usually either beef or chicken. Pho is a very popular food in Vietnam. Southern Vietnamese eat it for breakfast and occasionally lunch, whereas those from northern Vietnam consume it at any time of day.

The habit of eating lots of soups evolved not that many years ago when Vietnam was a very poor nation. Soups, with all their liquid, will easily fill you up.

The broth is the most important element of Vietnamese pho. Pho broth is considered the life and soul of the dish. It is what gives the soup its distinct character and makes the dish Vietnamese pho.

The flavor of beef or chicken bone marrow is the essence of pho broth. Good pho broth takes a long time to cook, as the bones have to be boiled gently for a long time, at least for 6 to 8 hours. Restaurant-quality pho is usually simmered for up to 12 hours or more.

It takes so long to make the broth as the marrow in the bones need to dissolve into the water. You can't force it with shorter but harder boiling as a hard boil distorts the flavor of the pho broth.

Due to the long cooking time for the broth, pho is now mostly consumed in restaurants. There are many independent and chain pho restaurants in Vietnam's larger cities

In Da Nang, which is in the middle of the country (neither north nor south), pho is eaten anytime of the day. I had it every day for breakfast. On my last day there for dinner (my flight home left at midnight), our client took me to the pho restaurant most popular with the Da Nang residents and we had beef pho. The restaurants that Vietnamese residents eat at are far more basic than the restaurants serving the tourist market. Here are a few photos of the restaurant - exterior, herb chopping and foodporn of my pho before I ate it all. As you can see, they didn't need to hire a kitchen designer.

Club Liko to finally open
Trying to develop a center in a country during two different political revolutions has its challenges and can slow things down. Club Liko, a children's edutainment center located in Sheikh Zayed City, part of the greater Cairo, Egypt metro, will open September 12th. We started work on Club Liko back in 2010, so considering it was built from the ground up, five years isn't all the bad when you factor in two revolutions. 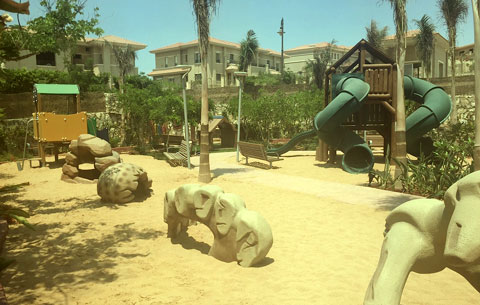 We have projects in the U.S. take longer without revolutions. We first started work on our project in the greater Seattle area that has had full funding from its start back in 2008 with a feasibility study. A site was located in a new shopping center to be built that year, but the Great Recession but a hold on its development until 2011. But then the City put a damper on things when it turned down the size of the supercenter supermarket to go in the center. In 2012, the supermarket agreed to reduce its size and zoning and site plan approval started again with the City. That has been an on-going process with a final zoning approval hearing on June 18. That means our client's center will probably not open until late 2016/early 2017, nine years after its start. So five years for completion in Egypt isn't all that bad.

Our Club Liko client recently traveled to Chicago where we met her and took her to spend time at Bellaboo's, a children's edutainment center we designed and produced an hour outside of Chicago in Indiana, to learn more about operations, and then she attended Frank Price's Birthday University in Raleigh, NC.

Alexandria, Louisiana
Okay, traveling to Louisiana might not be as exotic as travel to Vietnam, put Louisiana is a bit of a different, somewhat exotic culture, especially if you live in the Midwest of America like we do. I was in Alexandria to evaluate both market and physical feasibility for renovating an older bowling alley to become a modern hybrid entertainment and restaurant center for our new client there.

Don't forget the upcoming July 14-16 Foundations Entertainment University 2.0 is just two weeks away. This greatly enhanced seminar program will raise the bar for industry education with three full days, 12 breakout sessions and behind the scene tours of cutting edge FECs (see article in this issue). Cut-off for registration is July 16.

I hope you enjoy reading some of the articles in this super-sized summer reading issue. We've tried to make them informative with information you won't find in any other industry publication.