The beginning of Dinotropolis dates back to November 1994 when Enrico Banchi, the general manager of Unicentro El Marquas, the second largest shopping mall in Caracas, was looking through magazines in the American Embassy in Caracas for ideas for a new use for 60,000 square feet of third floor space originally designed as an exhibition hall. The shopping center's owners wanted to renovate it as an anchor attraction to increase the shopping center's traffic and market share with upper-middle socio-economic families. Enrico ran across an advertisement in one of the magazines for the upcoming Leisurexpo in Orlando, Florida. The idea for an FEC was born. He and one of the company's directors attended Leisurexpo 95 to search out more information and help.

They attended a seminar at the convention by Randy White, our CEO. They met with Randy and found an instant synergy between their entrepreneurial energies and our company's expertise.

Several weeks later Randy flew to Caracas to evaluate the property's potential for renovation as an FEC and to assist with the feasibility study. Based upon the desire to attract a family market of parents accompanying children to the FEC and the shopping center, it was decided that the space would be renovated as a children's entertainment center for children between 2 and 10 years old. The White Hutchinson Leisure & Learning Group was then hired to develop a storyline, theme, plans and designs for the Center and to assist the owners with starting the business. 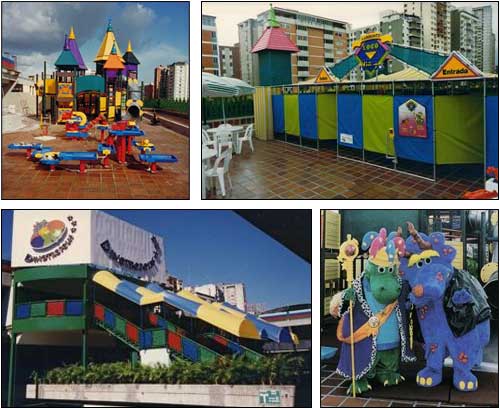 Extensive cultural research was conducted. On the basis of the findings on Caracains' traditions, values and aspirations, a storyline was developed. In abbreviated version it tells about some Caracas children who find a buried space ship that flies them on autopilot to the planet Gemini. There they find a civilization of intelligent dinosaurs - Momosauros, Quack-a-Dinos and Toromoros. They meet Max, head of the Momosauros, and visit the capital city, Dinotropolis. There are wonderful Play Palaces for the Momosauro children built and run by the Quack-a-Dinos. The Toromoros live on the dark side of the planet and are jealous of the Momosauros' hot fudge and flowers. Each day one of the Momosauros sits on the secret hot fudge recipe to hide it. The Toromoros are always knocking over the Momosauros looking for the recipe and also trampling their flowers. 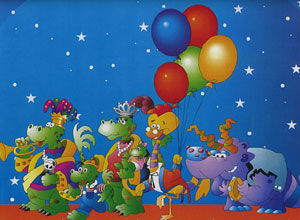 The children teach the Toromoros about electricity so they can light up their side of the planet and grow flowers. The children are heroes so Max returns to Caracas with the school children and helps them build their own play palace, which they name Dinotropolis in honor of Max's home city.

With the storyline as the foundation, White Hutchinson then developed a new design style of dinosaur-tropical-deco to create the 'sense of place' that is an essential element of branding a location-based entertainment facility.

Developing Dinotropolis was no easy matter. Venezuela experienced 80% annual inflation throughout the Center's development. Since the space didn't meet modern structural requirements for the weight load of an FEC, major structural deficiencies had to be overcome. This included removal of 4 inches of the concrete floor slab and replacement with lightweight concrete and special engineering of the roller coaster floor supports to distribute the structural load caused by its G-forces. Plumbing had to be run through operating stores located under the Center. A new electric substation had to be constructed underground. A new monumental stairway entrance had to be built from the mall's second level as the entrance to the Center. And halfway through construction, it was discovered that the entire roof over the Center had to be re-built.

The White Hutchinson Leisure & Learning Group coordinated the custom design, purchasing, shipping and installation of $1.5 million of equipment and furnishings that came from the United States, Canada and Europe. Even the logistics of something as simple as installing the custom designed U.S. carpet required flying in a trained carpet installer to oversee the installation since the carpet was unique to Caracas.

Dinotropolis features the world's first roller coaster that travels through the middle of a soft-contained-play unit. There is also a family Himalaya ride and 110 video and redemption games. Outside on a large 6,000-square-foot second floor patio there is a large climbing structure, a Crank 'n' Roll train, interactive water play and a maze ("Laberinto loco para Ninos"). Six birthday party suites cover 10,000 square feet to accommodate the large size birthday parties and their piñata breakings. Each party suite is serviced by a service kitchen. In addition, several of the suites have a special room where fathers can play games such as pool and darts during the parties, which is the custom in Caracas. Rather than the typical redemption counter, the White Hutchinson designed a 700 square foot redemption prize store with prize displays, separate ticket counter stations, and three prize purchase points-of-sale. 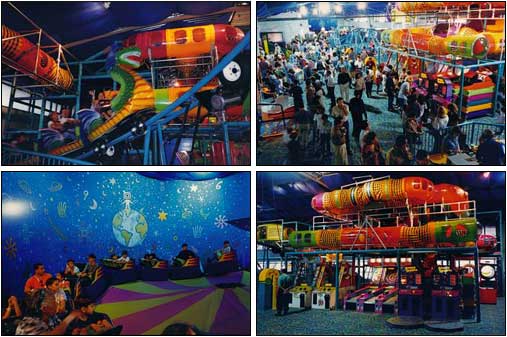 Food is no small matter at Dinotropolis. Max's Cafe features a wide selection of fun foods including made-from-scratch pizza, hot dogs, submarine sandwiches and fresh pastas. The largest seating area for the cafe is next to one of the Center's most popular areas, the hands-on/discovery or edutainment area that is specially designed for toddlers through 6-year-olds. There are tree houses, a pretend supermarket, a play house, pretend dress-up, a puppet theater, a dinosaur dig, a construction area, a fleet of cars and trucks for children to ride and a special dedicated area for older infants and early toddlers and their parents. And adjoining the area is Dinoteatro stage and theater area for live performances.

One feature that sets Dinotropolis apart from most FECs is its acoustics. Guests are not subjected to the loud reverberate noise of most FECs and can conduct conversations throughout the Center at normal voice levels. This is not an accident. From the very first steps of conceptual design, the White Hutchinson Leisure & Learning Group made acoustics an integral part of the design process.

Randy White of White Hutchinson says one of the great rewards of their work with foreign FEC's like Dinotropolis is that their company is always learning new ideas and concepts for FECs. "The owners and management of Dinotropolis had no preconceived ideas of what the FEC should be. This allowed us and the suppliers to freely collaborate with Enrico and the owners and introduce concepts that might have been quickly rejected in the U.S. by to the conventional wisdom that already dominates the FEC industry there." And Enrico and the owners are more than satisfied with the end results - tens of thousands of smiling repeat guests and a highly profitable business.

Dinotropolis won the Newsmaker Award for the best new foreign FEC At Leisurexpo 97.

Since opening in August 1996, Dinotropolis experienced an annual attendance exceeding 400,000 during its first four or so years. Then the changed political climate in Venezuela, the increase in crime and kidnappings and the deteriorated economy, all leading to a flight of many upper-middle income and higher income families, resulted in declining business. After eight years of operation, the owners choose to close Dinotropolis in 2004 rather than invest in its renovation.

P.S. After Enrico Banchi’s wife was kidnapped for ransom for the second time, he moved his family back to Italy where he has developed a very successful new career as managing director of a training and speaking company, Scuola di Palo Alto.