In January 2001 I traveled to Sana'a, Yemen to conduct market research for a family entertainment and celebration center addition to the Sana'a Trade Center. I was more than pleasantly surprised by the city, surrounding country, and most of all the warmth and hospitality of Yemeni people. Unlike the reports and travel warnings from the US State Department, I felt completely safe and saw no reason why any visitors should hesitate to visit this undiscovered land in Arabia.

I am always amazed how one or two incidents, such as some previous kidnappings in the far northern, tribal areas of Yemen or the bombing of the USS Cole in Aden will suddenly make a country like Yemen off-limits to visitors, especially Americans. If the US State Department looked at crime statistics in the US by the same standards as they make ratings of other countries, they would advise US Citizens to immediately leave the US and not come back. I took a look at 1999 crime statistics in Sana'a, a city of over 1.0 million and compared them to the Kansas City, Missouri, my home town, with a population of 440,000, less than 1/2 the size of Sana'a.

In 1999, the number of incidents of crime per resident in Kansas City, Missouri was 97 times higher than in Sana'a.

Yes, the bombing of the US Cole was a deliberate terrorists act, however, evidence now indicates the terrorists come from outside Yemen. There are terrorist incidents in the US. There was the bombing of the World Trade Center. There was a bombing of the Federal Building in Oklahoma City that killed 168. All committed by an American. Just take a look at some of the other high profile crime incidents in the US: Students being killed in classrooms. Employees being killed by mentally deranged or upset co-workers. Robberies with incident people killed.

Why is it when some high profile, headline grabbing incident occurs outside the US, that country is suddenly labeled a dangerous place to travel, yet with all the crime occurring everyday in the US, the US is considered safe? I often tell people that I feel safer in most countries than the US and only worry when I step off my return flight.

Back to Yemen. I does not deserve the reputation it has received. Everyone I encountered, whether on the streets, in the suqs, in the countryside, were warm and friendly. The Yemeni are not a violent people. Their Arab heritage and Islamic principals make them just the opposite. With only one exception, when tourists have been kidnapped in the far north, they were exceptionally well treated. Those kidnappings were politically motivated, not directed at the nationalities of the tourists. Part of Yemeni tribal values is to not kill, unless in war, as it will bring shame to your family-the greatest disgrace that can befall a Yemeni.

The Yemen government seems to also be taking measures to decrease the carrying of guns, especially AK-47 machine guns, which can be intimidating to foreigners. Many Yemenis consider a gun a basic part of their dress, no different that traditional --- dagger that many wear in their belts. They are worn as a symbol of pride and tradition, not to be used. While in Sana'a, I only say one citizen carrying an AK-47 in a traditional Yemeni restaurant.

There are still some military checkpoints at night in the City, and ones on the highway when you travel to the north. Apparently I was supposed to have some sort of travel permit when my client took me for a drive to see some of the northern villages. However, when we encountered the 1st checkpoint, he was able to talk us through without one. In a sense, the checkpoints make the country even safer, no different than the high presence of police in US cities. 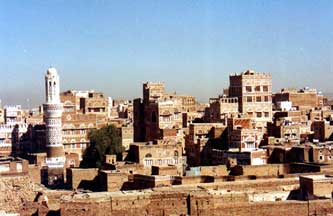 Yemen is truly one of the still undiscovered treasures of the world. It's civilization is considered one of the world's oldest. Antiquity knew it as 'Arabia Felix.' Among the many dynasties that made the lands of Yemen home was the Kingdom of Saba, in existence from some time in the 2nd millennium B.C., reportedly ruled at one time by the Queen of Sheba who visited King Solomon in Jerusalem.

Sana'a is said to be founded by Shem, the son of Noah, following the flood. Sana'a and the surrounding area are still mostly untouched by Western architecture. The distinctive and unique architecture of Yemen is one of a number of features that sets the country apart from the rest of the Arab Peninsula and Arabian Gulf societies. Architectural styles and building methods have evolved in isolation over a period of at least 2,000 years. Housing developed in a way suited to conditions of the geology and climate, using locally available materials including stone, random or cut; fired clay bricks; and unbaked earth known as "zabur." In the uplands area of Sana'a, high buildings with thick walls and roofs allow the heat of the day to be 'stored' and restituted at night, thereby providing a stable indoor temperature without any need for heating or air conditioning. large glazed windows. Perhaps one of the most distinctive features of architecture in the northern parts of Yemen are the well articulated windows with friezes, decorative features and designs formed with alabaster. Windows are double glazed, with the inside panes of stained glass and clear or translucent outside panes.

Residences can be as high as seven stories which were added by different generations. In the mountains and villages, Yemenis prefer to build their homes on top of large rocks and on mountain tops. Perhaps one of the best examples of this is Dar al-Hajar, the Rock Palace at Wadi Dhahr, which has become a tourist trademark for Yemen. Parts of the restored 5-story palace, which is perched on top of a large, high rock, have been dated to 700 BC.

The heart of Sana'a-the old city and medina, have been declared a World Heritage City by the United Nations. Efforts are underway to preserve some of the oldest buildings, some of which are over 400 years old. The medina, or old walled center of the city, is one of the largest completely preserved medinas in the Arab world. You can walk for half a kilometer in many directions without every seeing any modern buildings. With the exception of motor scooters and some cars traveling the narrow streets and alleys, you truly have a sense of stepping back in time. That is what is so unusual about Yemen. Time in many respects remains frozen in the past. The only Western fast food to be found is one Pizza Hut out by the parade grounds and several Baskin-Robbin's ice cream shops. Yes, there is not a single McDonalds in Yemen, although I read that someone is planning to open one in both Sana'a and Aden. 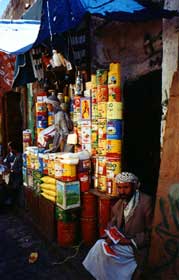 Just inside Bad al-Yaman, the gate to the old city, is Suq al Milh, the 'salt suq.' Salt is no longer sold in the suq, but just about everything else is. Like other ancient suqs throughout Arabia, there are areas or blocks that specialize on one item, such as silver, or shoes or spices. One of the most pleasant features of walking through the suq is that you don't experience any of the aggressive selling that is so often found in suqs in other countries. No merchants stand at their shops trying to entice you in. If you enter a shop, there is no hard selling. And unlike the rest of the Arab world, with the exception of the silver shops, there is minimal or no bargaining.

The food of Yemen is unique to the country as well. Lamp, fish and chicken are the predominate meats, usually grilled or barbecued and eaten, if you prefer, with you fingers using thin Yemeni bread which is baked in a kiln-type oven. Some of the best Yemeni food can be found in traditional Yemeni restaurants such as --- in Sana'a. The :Taj Sheba Hotel, one of the two five stars hotels in Sana'a, has a Friday brunch that features excellent Yemeni food. 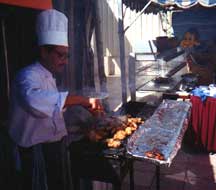 Brunch at the Taj Sheba Hotel in Sana'a

On the day we traveled north from Sana'a into the highlands country, I was amazed by the scenery-panoramic views from hills and mountains of fertile valleys. Since it was January, winter, there was little green vegetation or growing crops. However, I could see how much of the land would be green when the spring rains came. It must really be breath taking scenery then.

We visited the village of Kowkaban, which sits high on a mountain top. You have to travel a recently paved steep, winding road to reach the village and you enter thru a gate which is still closed every night. 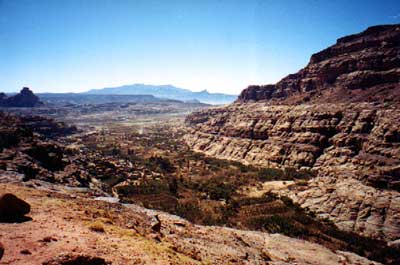 At the foot of the mountain below Kowkaban is the village of Alahgur.

I am looking forward to a return trip to Yemen this year to see and learn more about its people, culture and architectural.