Bowling; a tale of two worlds

Our company first entered into the location-based leisure industry 26 years ago with bowling. Back then, bowling was an industry and bowling was predominately a sport, at least in terms of bowling alleys' revenues (alleys referring to yesterday's model). Bowling leagues accounted for around 70% or more of revenues and the casual bowler was only considered a secondary market when the lanes couldn't be filled with league bowlers.

Back then people would sign up to bowl in a league at some particular time every week, say Friday at 5pm, for 30 to 35 weeks. It was sure different world back then. Can you imagine most people committing to that today with our changed lifestyles? It's hard enough to get someone to just commit to showing up next week.

One of the reasons leagues were so popular back then is because most people had very regular work hours and there were many more factory and blue collar jobs where workers, when they got off work, wanted a chance to unwind and socialize.

Bowling alleys were designed for league bowlers. Since it was considered a competitive sport, the design and maintenance of the lanes and bowling equipment was specified by the United States Bowling Council and bowling alleys needed to get annual certifications that they were in compliance.

As a result of both the decline in league bowling and the design of aging older bowling alleys with their settee seating, lounges, deferred maintenance, lack of remodeling and changing demographics in many locations, the number of bowling alleys has been in constant decline from over 7,000 in 1978 to around 4,100 today. The decline was 20% over the last seven years.

Our company uses several national survey sources to track the changing landscape of U.S. bowlers, including our own national surveys. Here are some of the trends we've identified.

Although there are minor differences between the different national survey sources, all show a one-quarter decline in the number of bowlers since 2007 while during the same time the U.S. population grew by 6%.

Generally, the percent of the U.S. population that bowled at least once during the past year is in the high teens and the number of households that had at least one member bowl is in the low twenties. This makes bowling still the most popular form of indoor entertainment other than the movies. 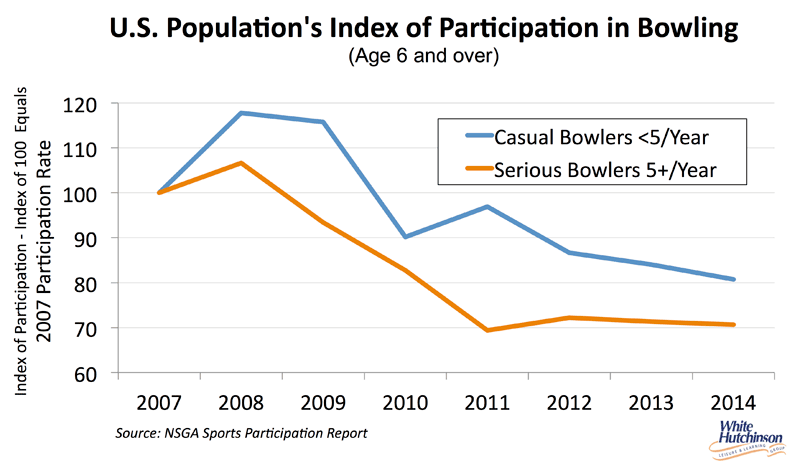 Most bowlers now bowl four or less times a year. 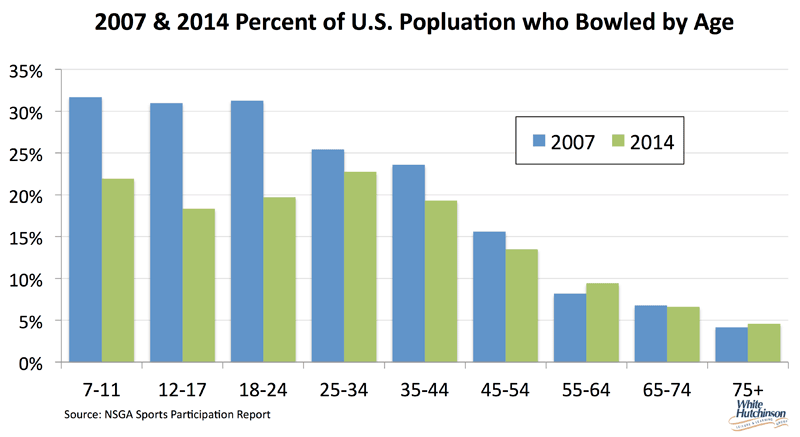 Bowling has not only shifted to the casual bowler who isn't bowling for sport, but also to higher socioeconomic households. 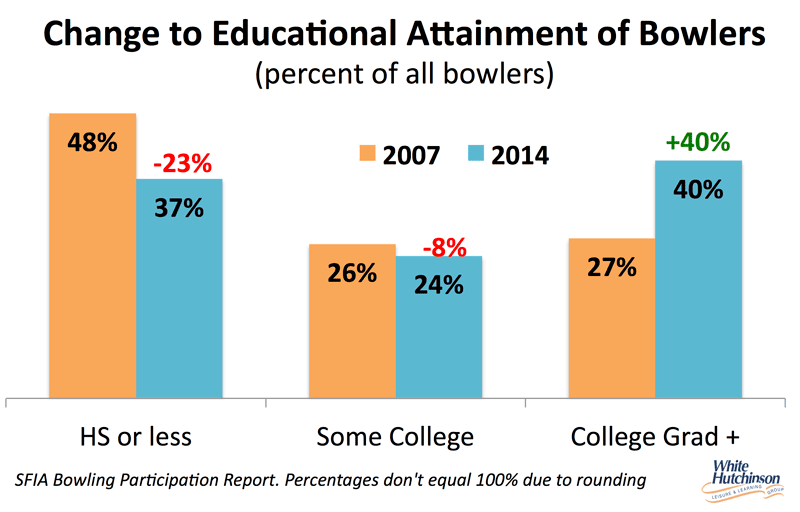 This is consistent with our company's research and analysis that shows a similar shift in participation share to higher income households in other types of location-based entertainment. 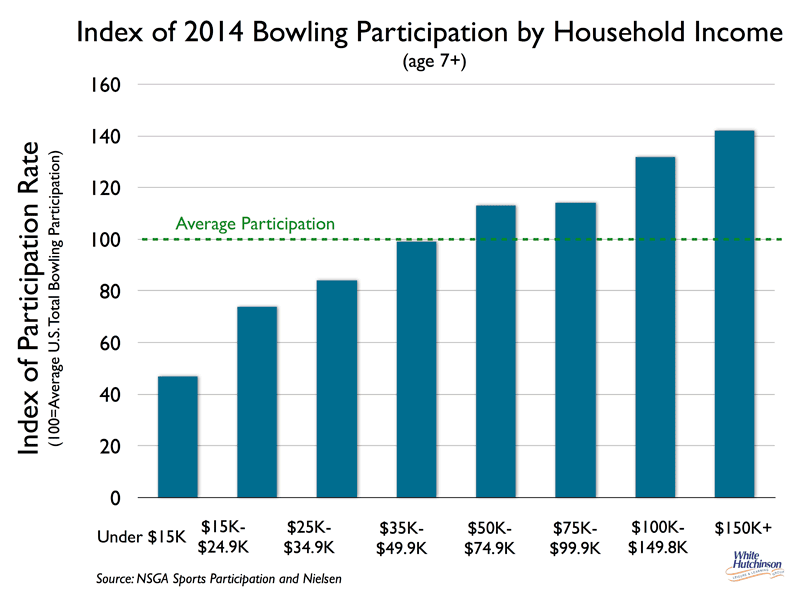 The decline in frequent and league bowlers plus the older bowling alleys not appealing to an upscale customer is the basic cause for the decline of so many bowling alleys over the past several decades. That is the Old World of bowling, leagues and old alleys.

But bowling has a New World and it has nothing to do with the sport of bowling. It's all about casual social bowling in new leisure destinations that don't consider bowling as their sole anchor attraction, but rather combine bowling with great food and beverage and sometimes other attractions in an upscale environment, including great seating at the lanes, not those Old World, hard settee seats.

Often, the high quality, contemporary food and beverage makes up at least half of the revenues. Many don't even have leagues, as the league customer is completely a different animal than the casual bowler. And when you focus on casual bowling and don't cater to the sport of bowling, there is no longer a need to follow USBC certification requirements. That means you can use string pinsetters instead of those complex mechanical pinsetters that require a pinsetter mechanic. You can even shorten the lanes. Oiling the lanes no longer has to be an exact science. Casual bowlers are there for the fun and socialization. They aren't in sports competition for high scores. Heck, half the time some of the people at the lane won't even bowl. It's more about party time.

So what is happening is what was once a bowling industry filled with bowling-dedicated centers, is dying. Bowling now is just one part of the mix, and often not the most important for the new breed of New World upscale dining, drinking and entertainment centers.

Some of these new upscale centers are older alleys located in good demographic markets that have been remodeled and updated to the New World standards. Many of the totally new ones have now expanded into chains. And not surprisingly, considering how hard it is for older bowling proprietors to change their paradigms, the most successful centers have owners who don't have a history in the bowling industry. The majority of these new upscale centers are designed to appeal to adults. Most importantly, they are phenomenally successful with per foot sales that are multiples of what the surviving alleys achieve.

So although the number of both centers and bowlers is on the decline, that trend should soon bottom out and reverse, at least for the number of bowlers. The demand for casual upscale bowling is elastic, meaning that when more of the upscale centers that include bowling are developed in areas of the country where they don't now exist (the majority of areas), people who are turned off by and don't frequent the old alleys will discover the New World for bowling and become regulars.

Yes, bowling is still in two worlds. There's the Old World of the alleys, fading leagues and the declining customers they attract. At the same time bowling is undergoing a renaissance with the growing New World of dining, drinking and entertainment centers that include some bowling as part of the socialization mix. Long live bowling!