Movie attendance, a canary in a coal mine for CLVs?

Movie theater attendance (box office) in North America has been on the decline since its peak in 2002. In 2017, attendance was down by over one-fifth (-21%), declining from 1.6 billion tickets sold in 2002 to 1.2 billion in 2017, a 25-year low. However, that really isn't the full truth about the decline, as during that same time period the North American population grew by 14%. So on the basis of attendance per capita, we've seen an almost one-third decline (-31%) from 4.9 tickets per person in 2002 to only 3.4 tickets per person last year. We're going to the movies a whole lot less often than we used to. 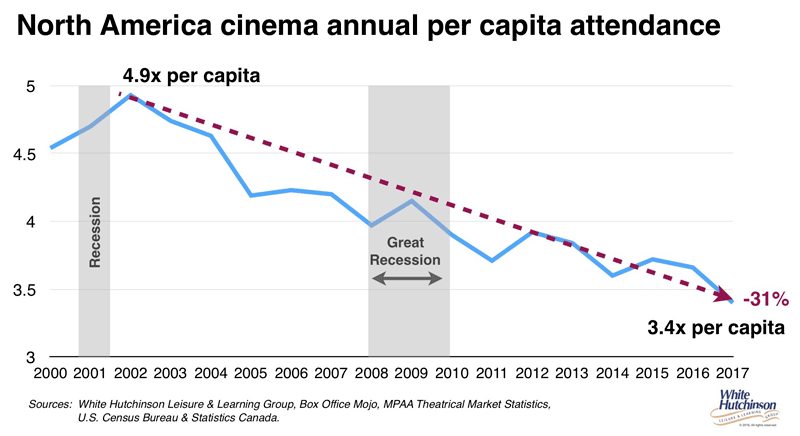 Hollywood continues to tout that cinema revenues are on the increase from $9.2 billion in 2002 to $11.1 last year. But again, that's not really the full truth. If you adjust the revenues for inflation, box office revenue has actually declined by 12%. 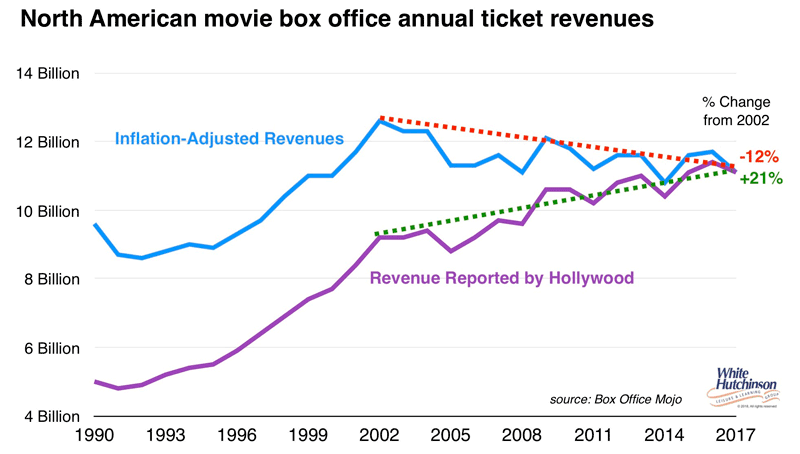 Meanwhile, on an inflation-adjusted basis, we've seen the average ticket price increase 12% from $7.97 in 2002 to $8.93 in 2017. But since we're buying fewer tickets per person, average annual per capita box office spending has declined by over one-fifth (-22%) in inflation-adjusted dollars.

When we examined the revenues of individual movies, it is very insightful to find that out of 724 films shown in 2017, the top 10 produced one-third of all the box office revenues and the top 20 produced half of all revenues. 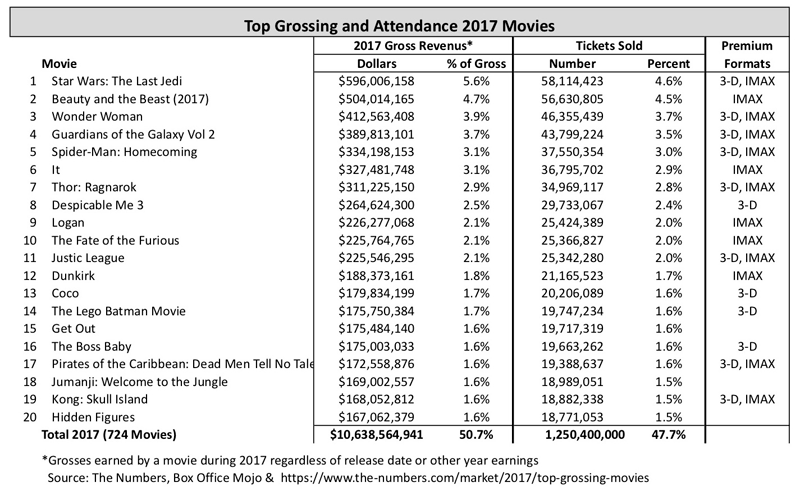 This is almost identical to an analysis we did of movies shown in 2015. Back then the top nine produced one-third of all box office revenues and the top 20 accounted for one-half of revenues.

The top ten that produced one-third of all 2017 box office revenues where all available in premium 3-D, IMAX or both formats. The same was true back in 2015.

So how is it that less than 3% of all movies can account for one-half of all box office revenues? It's because of what we call a High Fidelity experience. They were premium quality in all respects, including their content, stories and the availability of most in 3-D and IMAX projection. Their High Fidelity experience was compelling enough to pull people off their couches and away from their highly convenient, large-screen movie viewing options at home. And in 3-D and IMAX, people were willing to pay a premium ticket price to have an even Higher Fidelity moviegoing experience that on the standard cinema screen.

So while per capita moviegoing is on a significant decline, the High Fidelity movies are still winning. In fact, when we went back to 2002, the peak year of per capita movie attendance and before the birth of the smartphone and modern social media, to see how much things have changed, we find that the Highest Fidelity movies today are winning a greater market share of all moviegoing than they used to. 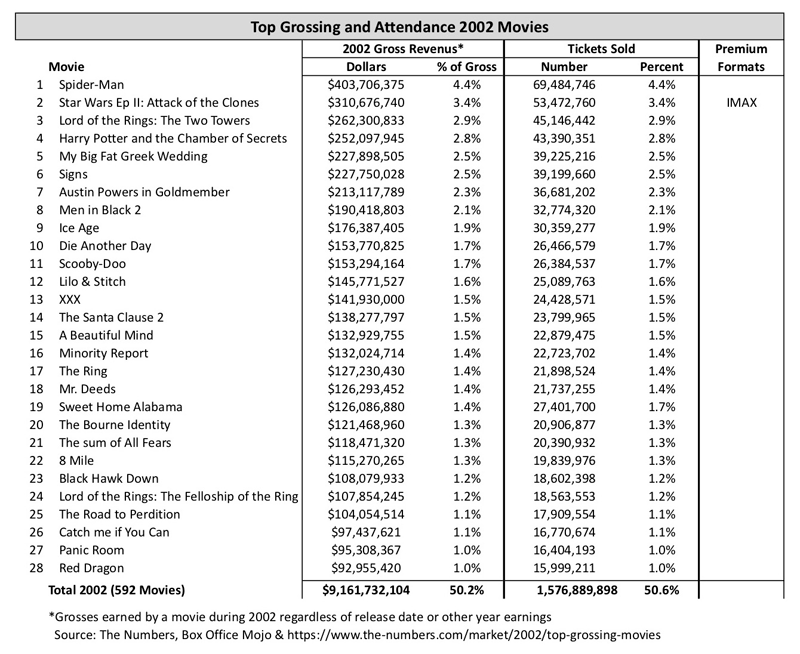 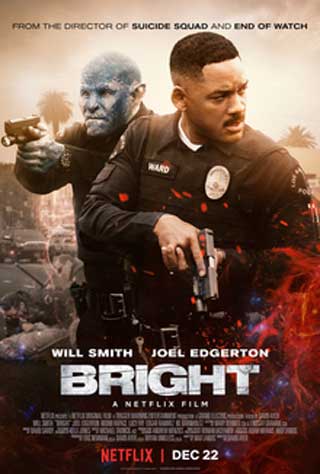 We believe this demonstrates a basic shift that has occurred to out-of-home moviegoing due to the growth of all the digital screen movie viewing options that have emerged since 2002. This includes streaming movies at home on HDTVs from subscription services such as Netflix, Hulu and Amazon, many of the movies not available in the theaters. People didn't have to pay a dime or get off their couches to watch Netflix's Bright, viewed by over 11 million subscribers in its first three days of release. We now also have bing watching options as well. People are leaving their homes far less often today to go see movies in the theater, but when they do, it's the High Fidelity ones that attract them the most, even at a premium price. It's those High Fidelity ones that are gaining a greater market share of all moviegoing - in 2002, it took the top 4.7% of all movies to generate 50% of all revenues, in 2017, it only took the top 2.8% to accomplish the same.

This demonstrates a phenomenon know as the High Fidelity vs. Convenience Trade-off. The theory is simple - in our accelerating experiential economy, consumers perceive and make choices in terms of two key dimensions - experience and convenience. People make decisions by a simple trade-off between Fidelity (the quality of experience) and Convenience (the ease of getting and paying for something). The more convenient options become (in this case the digital screen options), the higher the Fidelity the out-of-home option has to become to be remain competitive (in this case moviegoing).

So is what's happening to the movie theater industry a canary in the coal mine, a warning for community leisure venues (CLVs), including family entertainment centers? It absolutely is. Although not yet as severe as the drop in attendance that cinemas have experienced, our company's extensive research shows that the increasing Convenience of consumers' at-home and digital entertainment options are winning and that the out-of-home CLV industry is on a decline in terms of overall attendance, time spent and participation, as well as a shift of market share to higher socioeconomic consumers. And there is also a shift of an increasing CLV share to the Higher Fidelity experiences, just like in the movie theater industry.

So the bottom line for community-based leisure venues, including all types of family entertainment centers (FECs) is quite simple. In our world of highly convenient and compelling digital screen and at-home options, if you want to attract consumers, you need to offer compelling, premium, High Fidelity experiences.

A mistake that's so easy to make in implementing this strategy is to raise the Fidelity just a little bit more. The adoption rate and improving Convenience of digital options is accelerating so fast that by the time you increase the Fidelity of the CLV experience just a little, digital will have already leapfrogged you with greater Convenience. To have an impact, to remain successful, the improvement needs to be dramatic.