To win today, it's all about offering a High Fidelity experience

Over the past few years we’ve been writing about High Fidelity versus Convenient experiences. A High Fidelity experience is a high quality, more or less luxury experience, whereas a Convenient one is cheap and readily available. A simple example is attending a music concert versus listening to perhaps the same music in mp3 format on a smartphone. The music concert is High Fidelity. It’s high quality music, in a venue with other people, often high-energy, with all types of visual affects, live musicians, costly and only available at a particular time. The same music on mp3 is low sound quality, convenient, you can access it anytime, and its cheap or even perhaps free.

The more Convenient experiences become, the higher the Fidelity the alternative has to become to be attractive. And paradoxically, people are willing to pay a higher price for that higher Fidelity experience, as it has a higher perceived value.

Today, advances in technology are improving both the High Fidelity and Convenient options (driven largely by especially the Triple Revolution of the Internet, social media and constant connectivity - the smartphone), and in the process, the Fidelity Belly that spells death to any business, widens.

As both Fidelity and Convenience improve over time, what at one time was a High Fidelity experience finds itself in the Fidelity Belly with little or no appeal. 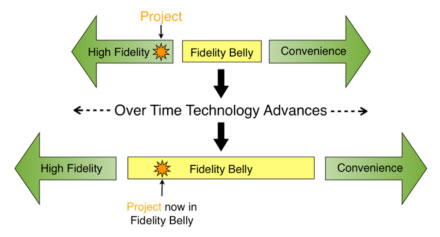 What is happening today is that technology is advancing at a faster pace than ever, so what were once High Fidelity experience are finding themselves in the Fidelity Belly much sooner than in the past.

One example is the movie industry. Technology is getting better and better in the home for both the quality of movie viewing and the ease of accessing movies. So the difference between seeing a movie in a stadium-seating theater and eating popcorn and seeing a movie at home is getting smaller and smaller – stadium seating theaters are falling into the Fidelity Belly. Since 2002, per capita movie attendance has declined by one-fifth (21%). 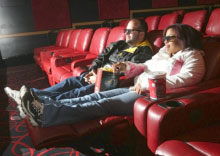 Yes, that’s the way High Fidelity works. Less, but higher quality seating results in a higher Fidelity movie-going experience and greater revenues. Not only are people paying a higher price for the High Fidelity experience, but also they are going to the movies more frequently. Demand for out-of-home entertainment is elastic. People will only leave their homes if the experience is High Fidelity, high quality, what you might define as luxury. And if it is, they will pay a higher price and perceive it as a great value.

Today, to get people away from all their digital entertainment and social media options and out of their homes requires a High Fidelity experience with the bar constantly being pushed higher by technology. Today, many family entertainment centers (FECs) are like the now older style stadium-seating theaters. They are falling into the Fidelity Belly, experiences that no longer have appeal and perceived value. No different than movie theaters, to survive into the future, FECs need to find ways to raise the Fidelity of the experiences they offer.

If you have any doubt about what we’ve been describing, just take a look at this graph that shows the change in how people have been increasing their entertainment spending for digital electronics and services, the majority of which is for Convenience entertainment, rather than for fees and admissions to entertainment and sports venues. The digital electronics share has more than doubled while the fees and admissions share has decreased. Mostly at-home Convenience is winning out over out-of-home venues, probably since the venues are not moving their Fidelity up fast and high enough to offset the advances that digital technology is bringing to Convenience experiences. 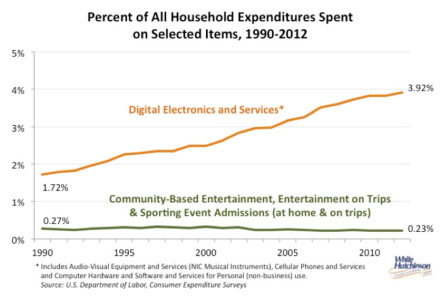 The bottom line is quite simple; entertainment and sports venues need to reinvent themselves to again hold the High Fidelity positions they held many years ago to stay relevant to today’s very technologically connected consumer who finds the digital world so much more enticing. Falling into the Fidelity Belly spells obsolescence

For an example of how the Convenience end of the experience continuum is improving, see Randy White’s blog Smartphones are making TV tougher competition than ever.