Food and beverage represents the majority or almost half of the revenues at the majority of the most successful community-based entertainment venues nowadays. This includes what are often referred to as eatertainment concepts such as Punch Bowl Social, Topgolf, Dave & Buster's and Kings.

So it is important to consider those venues the same as restaurants, as the food and beverage is a major consideration of consumers' decision to visit. Zagat's 2018 Dining Trends Survey of 13,000 diners across the country offers some important insights on what it takes to stand out from the crowd of all the dining options consumers have today. 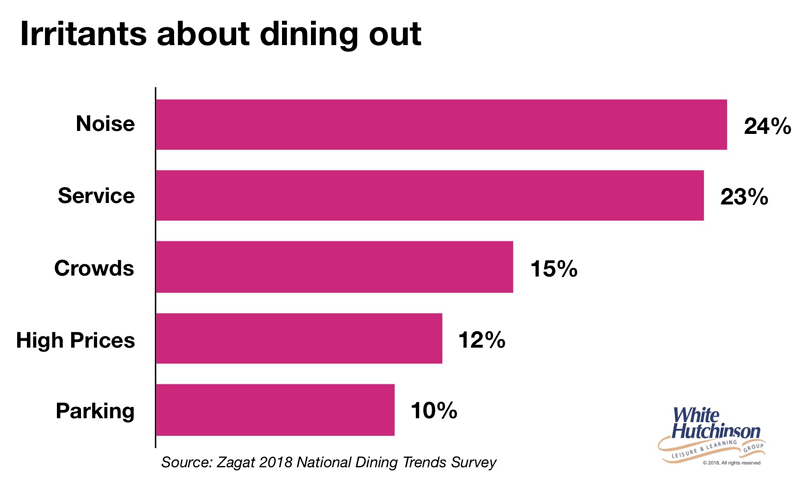 Noise ranks as the top irritant. Why? It's simple. When people go out to dine, they are also going out to socialize and relax. It's hard to socialize without raising your voice when it's noisy. It's also not very relaxing to be in a noisy environment (more at Is your CLV really for socialization?).

Oh, what's not on the graph is those backless chairs and bar stools that have recently come into fashion with designers. Diners dislike them. 70% say they are ‘so over' chairs and stools without a back.

Then there are the deal breakers, things that will absolutely stop people from coming. 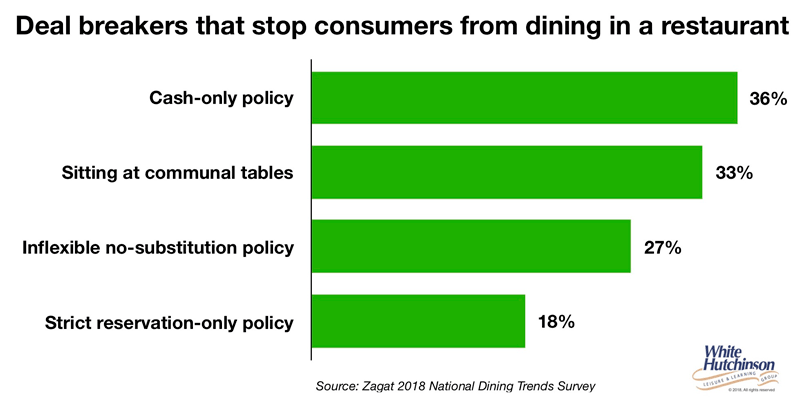 So how important can food be to driving attendance? Over three-quarters of respondents considered themselves foodies (77%). For a signature dish, something people want to try, it's amazing how far diners will really go out of their way, take a lot of time to drive to a restaurant, to try it. Great food can make the difference between having a 15-minute drivetime trade area and one much larger.

Food is even a major part of the equation of what destination people choose for a vacation for some consumers. 13% said they would jump on a plane or plan a vacation around a “must try” dish. Over half of diners (56%) said they have or would eat multiple lunches or dinners during a trip or on vacation to squeeze in all of the locale's must-try dishes.

Today, chefs have to do more than create great tasting food; they have to be artists with its presentation due to the influence of social media. Today, food and even drink presentation has to be Instagramable. 41% of diners say they take food photos to share on social media. In fact, almost half of those food photographers (49%) admit to stopping their dining companions from eating so they can take a photo of the dish.

Today food, good quality and artfully presented food, is critical to success at community leisure venues. It has transitioned from a secondary impulse item not all that many years ago to a major driver of destination decision-making.