The resurgence of duckpin bowling

Bowling has made a major transformation over the past years from a sport once dominated by league bowlers to a casual social activity paired with contemporary food and drink.

When our company first started working in the community leisure venue (CLV) industry back in 1989, bowling leagues generated three-quarters or more of bowing alley revenues. So that is whom you designed for. It's hard to image in today's world that people would sign up to go league bowling at a certain time every week for 32 weeks like they did back then.

The world is a lot different today and so is the leisure consumer. People won't make that type of commitment nor is bowling as a sport anywhere as popular. The ratio of league versus casual bowlers (often referred to as open play bowlers) has totally reversed since we have entered the industry. People who bowl 12 or less times a year, the casual social bowlers, are now more than three-quarters of all bowlers. We no longer develop bowling alleys with gobs of lanes to cater to league bowlers. That is no longer a viable model. Today, if you include bowling in the mix of a CLV, you design for the casual bowler, which means less lanes and a more upscale environment. And you don't even have leagues.

Recognizing the emergence of the casual bowlers as the dominant primary target market, our company for years has advocated changing the type of bowling offered in order to better cater to the casual bowler. Back in 2012 we published our article, It's time to reinvent the game of bowling, and most people in the bowling industry through we were crazy to suggest duckpin bowling using string pinsetters instead of ten-pin bowling with traditional mechanical pinsetters.

The reason that ten-pin bowling has been the dominant type of bowling is that in the late 1800s the bowling clubs in the NE United States used different variations of ten-pin bowling since there were no standards. So in 1895 the American Bowling Congress was formed and standardized the sport so national competitions could be held. Ten-pin became the standard for sport and competitive bowling. Then in the 1950's television embraced competitive bowling with shows such as Championship Bowling, Make the Spare, Celebrity Bowling and Bowling for Dollars. Soon major sport competitions started such as the Pro Bowlers Tour and Ladies Pro Bowlers Tour. The popularity of ten-pin bowling as a sport grew with competitive league bowling becoming the dominant form of bowling alleys. So all new centers were developed as ten-pin centers since leagues and tournaments were driving the industry.

The problem with traditional ten-pin bowling for non-sport bowlers is two-fold. The heavy ball with its finger holes is not at all user-friendly. Ten-pin bowling balls weigh up to 16 pounds and are 8.6 inches in diameter. The heavy ball with its three finger holes is awkward to throw, especially for occasional bowlers, especially women and children. Secondly, the pinsetters are very elaborate machines with lots of moving parts, more than 1,000, requiring full-time mechanics during bowling times to keep the machines operating properly. 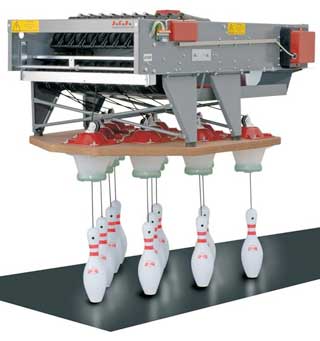 Back before the boom of league bowling, ten-pin bowling was not as dominant as it is today. There were two other forms of bowling in America - duckpin and candlepin. Duckpin and candlepin bowling use a ball about the size of a grapefruit (4-3/4 to 5 inches in diameter) that weighs between 3 lb.6 oz. to 3 lb.12 oz. and lacks the finger holes found on ten-pin balls. You palm the ball to throw it. Duckpins, while arranged in a triangular pattern of 10 pins identical to ten-pin bowling, are shorter, smaller, and lighter than their ten-pin equivalents, about 2/3rds their size. Since duckpins don't score as high as tenpins, bowlers get three throws for each frame versus the two in ten-pin

Duckpin bowling grew in popularity during the mid-1900s. Many bowling alleys developed in Baltimore and other east coast cities were either 100% duckpin or had around half the lanes ten-pin for leagues and half duckpin lanes for casual bowlers. In fact, in Baltimore from the 1930s to the 1960s, duckpins dominated ten-pins. In 1963 metropolitan Baltimore had 1,105 duckpin lanes and 538 ten-pin lanes. You can still find a number of those half-and-half bowling alleys in Baltimore.

Originally duckpins were set by human pinsetters, known as pinboys. Automatic duckpin setters were developed in 1953 by a kooky inventor named Kenneth Sherman and named the Sherman duckpin setter (video of duckpin bowling and Sherman duckpin setter). Duckpins suffered a fatal blow when the Sherman company ceased operations in 1973. Brunswick Equipment offered to buy Sherman's patent, which would have kept the machinery in production, but he said no - a stroke of stubbornness duckpin bowlers call “The Curse Of Ken Sherman.”

So after 1973 new pinsetters were no longer available for the development of new duckpin centers. Existing operators were forced to cannibalize pinsetter parts off of the bowling houses that closed, often buying the machines and putting them into storage to use for spare parts. The lack of new pinsetters is a significant cause of the decline of duckpin bowling, as it thwarted the growth of new centers.

Today we have an answer to the The Curse of Ken Sherman since that type automatic duckpin pinsetters hasn't been manufactured for almost 40 years. There is another type of pinsetter called a string pinsetter that is available today. In a string pinsetter there is a string attached to the top of the pin. The string does not interfere with the pins when the ball hits them. At the end of each throw, the machine pulls the pins back into a rack and resets the pins that weren't knocked down. One of the many advantages of string pinsetters is that they have only around a dozen moving parts with minimal maintenance needed. So there is no need for the expense of one or more full-time mechanics to keep the machines operating properly. String pinsetters, even for ten-pin bowling, have been very common for years in other countries including Canada, Germany, Luxembourg, Russia, China, Romania, Hungary, India, Brazil, and Mexico.

The first CLV our company designed and produced with duckpin bowling was Helio Center in Da Nang, Vietnam, which opened in early 2015.

Since then we are including duckpin bowling in all our projects. There will be 12 lanes of duckpin bowling at our highly sustainable Ocean5 project in the greater Seattle-Tacoma region of Washington State that opens early this year and 6 lanes at Doc Brundy's delectable diversions sodacade that also includes a classic pinball gameroom. We have other CLVs with duckpin bowling on our drawing boards.

The primary reason we're big on duckpin bowling is that it is far friendlier and more conducive to a group of people having fun and a great social experience than ten-pin bowling. It also more profitable as there is no high labor expense for full-time mechanics required for regulation ten-pin bowling. Also, serious ten-pin bowlers can't be competitive when they play it as it takes them out of their comfort zone. And duckpin bowling is a little retro, including its above lane ball returns, which is fashionable.

It's back to the future with duckpins. Let the ducks fly!