Are the majority of Americans really single?

On September 9th, Bloomberg ran a story by Rich Miller titled Is Everyone Single? More Than Half the U.S. Now, Up From 37% in '76, which announced that for the first time since the government began compiling such statistics, more than half of the American adult population was single, by his figures 124.6 million Americans, 50.2% of those 16 years or older. In a report to clients, economist Edward Yardeni flagged the increase in the proportion of singles to more than 50 percent, calling the single population "Selfies." Here's Bloomberg's graph showing the rise in Selfies from 37.4% in 1976.

Charlotte Mellander, Professor of Economics at Jönköping International Business School, also crunched U.S. Census Bureau data this month on the share of American adults who are single, divorced or never married and came up with the majority, 51.2% of the population being single, similar to Bloomberg's numbers, which were based on data from the U.S. Bureau of Labor Statistics. She produced this map showing the percent of singles by State. 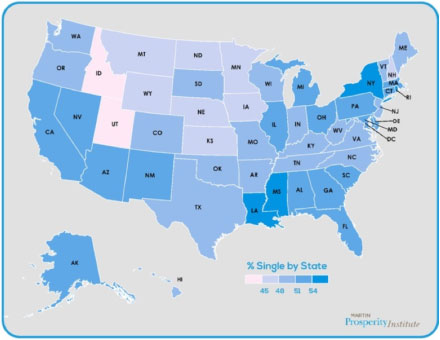 Of the largest 51 metros, New Orleans, Memphis, Miami, Los Angeles, Buffalo, Las Vegas and Providence have the highest percentage of singles, all over 55%.

It's true that if you look at certain data from both the U.S. Census Bureau and the Bureau of Labor Statistics, those are the results you'll get - the majority of American adults are single. However, there is a basic flaw in Miller's, Yardeni's and Mellander's approach. Many singles are not single, but rather cohabitating, living as unmarried couples. And the data Miller, Yardeni and Mellander used failed to account for that.

Our company dug deeper into data at the U.S. Census Bureau to account for unmarried couples. Here's what the data shows by age groups if you don't account for cohabitating couples, that the majority are single. 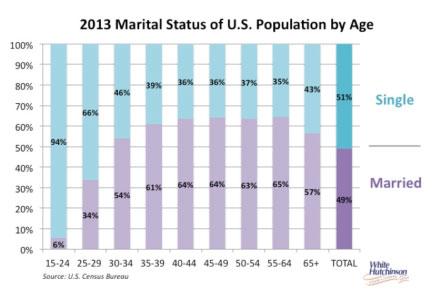 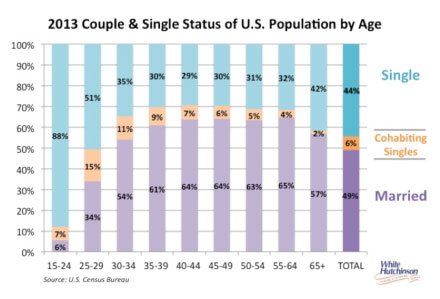 So this just goes to show you can't believe everything you read, even when it comes from a respected source such as Bloomberg and Professor Mellander. 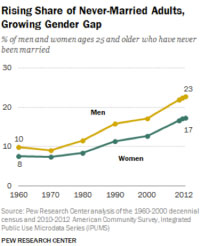 Regardless of whose data you use, the simple fact is the percentage of the population that is single is growing. So why is there a decline in the marriage rate? One reason is that adults are marrying later in life. The median age at first marriage is now 27 for women and 29 for men, up from 20 for women and 23 for men in 1960. Another reason is that the share of adults cohabiting is increasing. About a quarter (24%) of never-married young adults ages 25 to 34 are living with a partner. But even factoring in co-habiting couples, the number of singles is still on the rise. According to the report by PewResearch, when Millennials reach their mid-40s to mid-50s, approximately 25% of them (a record high share) will most likely still be single.

And when PEW surveyed Americans, they found that the most important and number one quality that three-quarters (78%) of never-married women say they want in a partner is a husband with a steady job. When women do decide to marry, they are making a very rational economic decision. 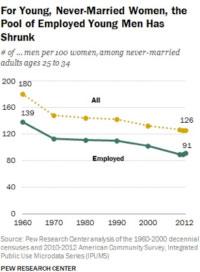 Finding a man with a steady job is more difficulty than it used to be, especially due to the recent recession and continuing high unemployment rate. According to PEW's analysis, there are only 91 employed men per 100 women in the 25-to-34 age group, down from 139 in 1960. Even worse, many of today's employed young men have low-paying and unstable jobs, making them unattractive marriage partners.

What does all this mean to location-based entertainment venues? Undoubtedly it means that they have to recognize that the composition of the population is shifting and singles of all ages are now and will increasingly be an important target market to attract.

For more about America's changing demographics, also see Births down, but don't despair in our May 2014 issue.