Smartphones are making TV tougher competition than ever

Television viewing consumes the largest share of our leisure time and is the number one competitor to people spending their leisure time away from home. In 2012, television viewing consumed an average of 2 hours and 50 minutes a day, more than half (53%) of our average 5.37 hours of leisure time each day and one-fifth (19%) of all our awake time. And TV viewing time is on the increase, 7% since 2004, whereas time spent away-from-home at entertainment and cultural venues is on the decrease.

In the recent issue of Wired Magazine, Mat Honan wrote a very noteworthy and what should be frightening article for anyone in the location-based entertainment industry called “Tube Amplifier.” Here’s an except from his article:

“The Internet has gotten better and better at letting us talk to one another. . . I can share something—on Twitter or Facebook or Instagram—about what I’m currently experiencing and immediately hear from others experiencing the same thing.

“This instant Internet, ubiquitous and pushed to our smartphones, lets us experience events not only as they happen but together—even when we are physically apart. It’s not watching something at the same time as someone else; it’s watching it with them. We’re not just broadcasting anymore; we’re conversation-casting.

“Television has talked to us for decades, but it never listened. While we all watched events like the moon landing at the same time, we did so in pockets of isolation. This is why the so-called second screen has triumphed over the first. It’s why “second screen” is such a colossal misnomer; the phone is the first screen—always with us and always on. And it has made our big screens more vital. By combining the two, we connected ourselves.

“Thanks to this, live TV has never been better. The ability to comment immediately and have anyone respond has given live television a power-up; it has provided motivation to tune in to things we might otherwise skip or TiVo. Because a show isn’t just something to watch anymore—it’s a way to connect. . . 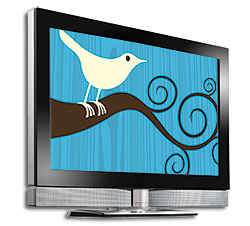 “During the Sochi Olympics, peak tweet volume hit during a live hockey shoot-out that pitted the US against Russia. Both countries were tuning in and cheering through their devices,
despite a massive time-zone discrepancy. And this year’s Oscars were the most-watched in 14 years, even with our DVRs and other entertainment options. Maybe we just wanted to talk. . .

“Today the conversation is the event: The highlight of the show is what happens simultaneously on another screen. It’s experiential synchronicity.”

This new internet-enabled social dynamic to watching television is the tube amplifier, or should we say flat screen amplifier. This new ability to socialize at home with people elsewhere while watching greatly enhances the attractiveness of television. It also makes watching a lot of TV in real time far more desirable than DVRing it, giving less flexibility to when you do other leisure activities.

This new expanding dimension of TV viewing is very similar to the appeal of massively multi-player online games (MMOGs) and massively multi-player online role-playing games (MMORPGs). Most players are drawn to the games more for their social aspects than the game play. However, the segment of the population that watches television is far greater than the number of people playing these online games

I’ve been writing a lot in this blog and in our company’s Leisure eNewsletter about how digital technology is changing the competitive entertainment landscape and taking both leisure time and leisure disposable dollar share away from location-based entertainment. Now we have the synergistic combination of two digital screens merging to become more powerful and attractive than either alone. Disruptive digital at-home entertainment competition continues to ramp up its game. To counter this new competitive threat, location-based entertainment venues need to ramp up their game, their quality and attractiveness, what is called High Fidelity, to become a premium experience in order to continue to lure people away from the digital options in their home cocoons.

We are in the mist of a profound shift from real world to digital entertainment and it’s happening faster than most people realize.