We are no longer dealing with the same out-of-home entertainment consumer we were only a few years ago. Their preferences, expectations, values and behaviors have dramatically changed. Our company has been heavily researching the trends that are impacting the choices consumers are making and their behaviors when they decide to leave home. Those changes are so significant that in the last year or so we have completely changed the business models for the OOH entertainment/leisure venues we are designing and producing for our clients to assure they will be future-proof based on how the trends are evolving.

Last month we published a heavily researched white paper : Has video game play crowded out and displaced time and attendance at out-of-home entertainment venues? Getting to the root cause of declining repeat appeal where we shared some of our research and trend findings. The white paper was very lengthy and rather academic, so we're sure many of our readers didn't read it. However, it contained significant information on trends that are impacting out-of-home entertainment and leisure. So, we've decided to offer this abridged version that summarizes its key findings in a little over one-quarter of the number of words.

There has been a decline in time spent at out-of-home (OOH) entertainment and arts (E&A) venues. Using an average travel and attendance time of 2.5 hours per visit, we calculated the following changes for the average annual number of visits for different age groups using the average time for years 2006/2007 and 2017/2018 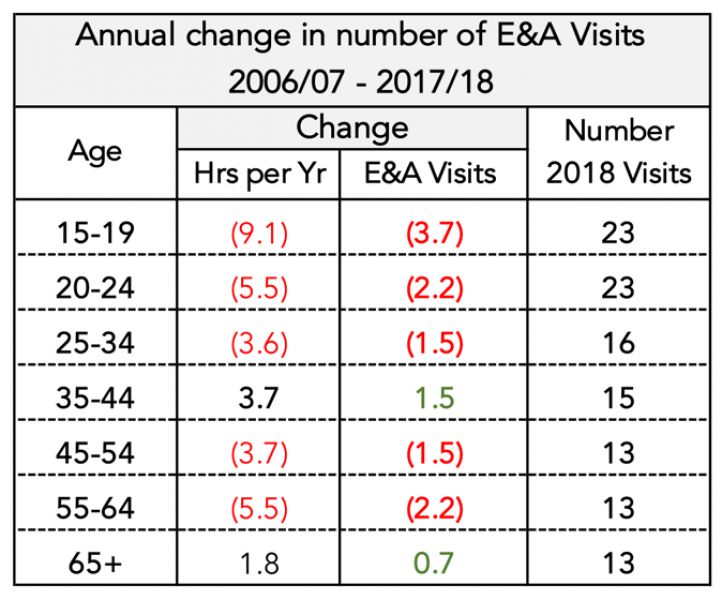 The greatest decline in attendance has been with the youngest groups, ages 15-24. However, they still remain the most frequent attendees at OOH E&A. 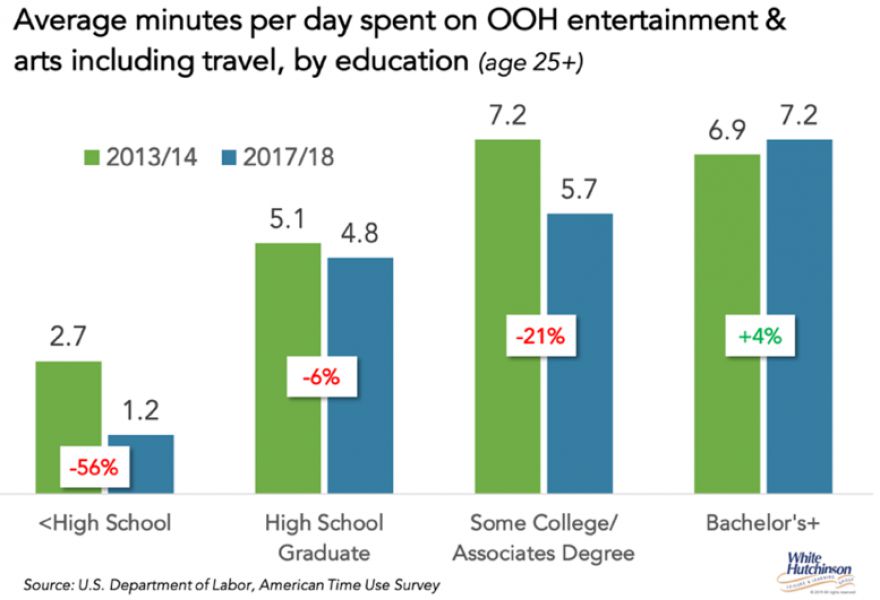 What is even more noteworthy is that the share of all time at OOH E&A has significantly increased for bachelor's+ adults from 39% of all such time to nearly one-half in 2018 (49%). There is a clear gentrification trend for OOH E&A. 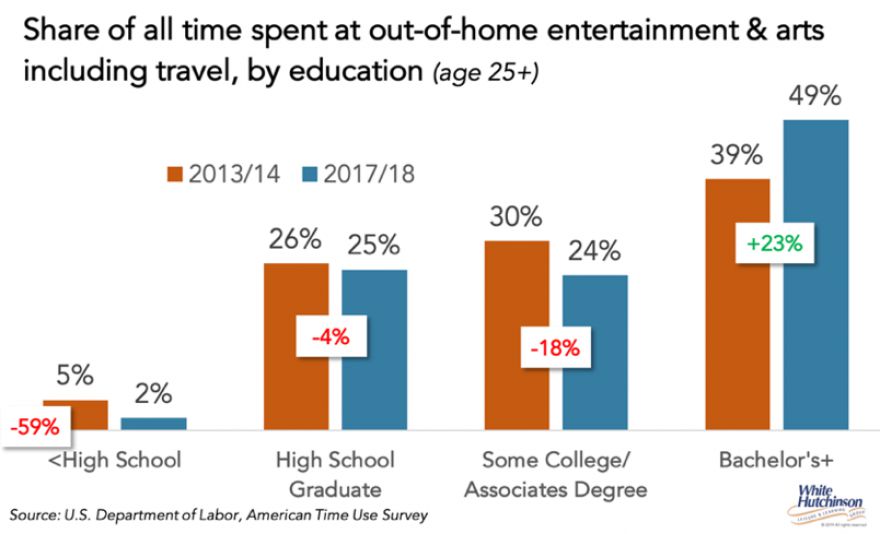 Likewise, a larger share of all OOH E&A spending has shifted to bachelor's+ households. Their share of all spending has increased by 20 percentage points from a little over half in 2007 (53%) to nearly three-fourths in 2018 (73%). This further confirms the OOH E&A gentrification trend. 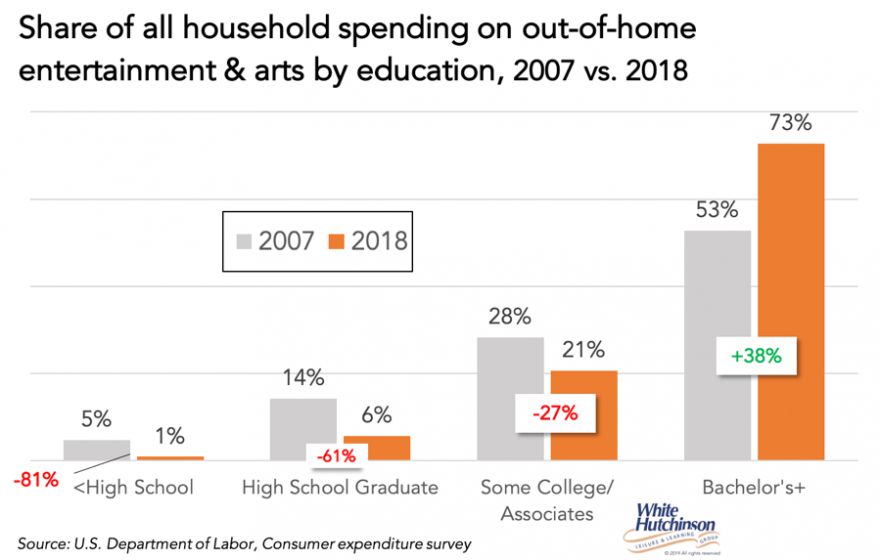 There is a perception that the increasing amount of time Americans spend on their screens playing video games is displacing, crowding out, other forms of leisure, including time spent attending OOH E&A venues. We analyzed changes in video game play time. 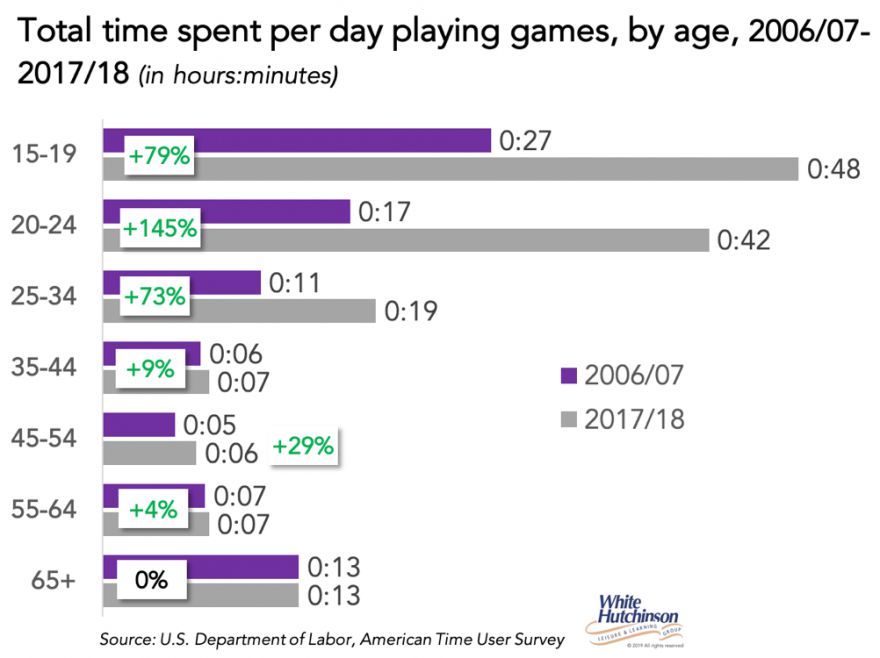 There has been a significant increase in average time spent playing video games by the 15 to 24 age group.

Available leisure time has actually increased slightly, an average of 9 minutes a day, with the youngest people having the greatest increases in leisure time. 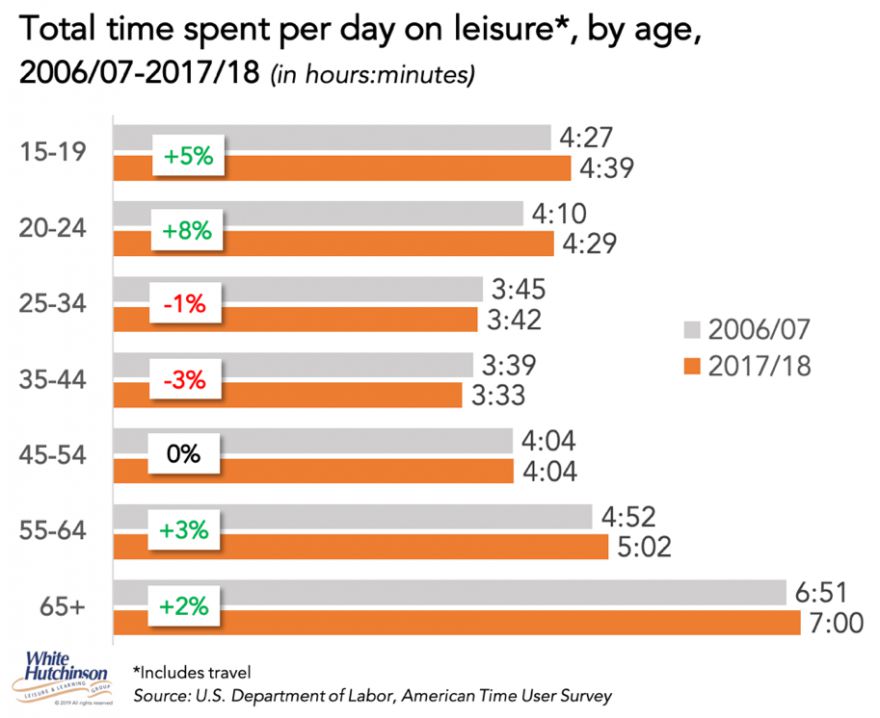 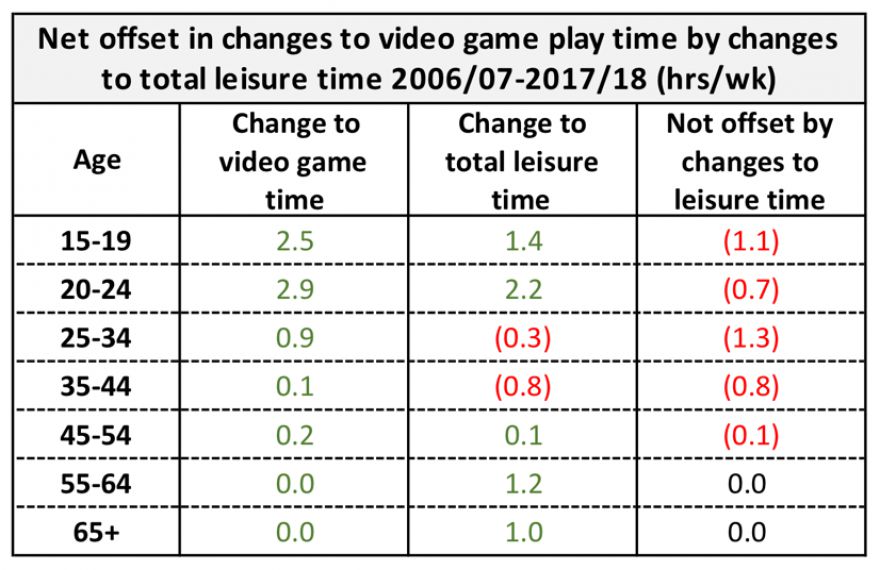 The research findings and our data analysis were consistent in finding that with the rare exception of younger, addicted, heavy-use players who at most are 1.5% of the general population, video game play is not displacing time attending OOH E&A with the exception of moviegoing. It appears that teenagers and young adults who play video games the most are switching one type of screen entertainment, video games, for passive time watching TV and looking at the cinema movie screen.

So, it ends up that video game play is not the culprit for declining attendance at OOH E&A with the exception of declining moviegoing. Rather, our research found there is combination of a number of factors that are the root cause for the decline in attendance, especially repeat attendance, at many traditional entertainment venues.

It's human nature to be seek new experiences rather than repeat ones. Our brains are hard-wired by evolution to crave novelty. The desire for novelty, to explore something new, is rooted in enabling us to learn something new about our environments and how to survive. Novelty triggers the production of dopamine, making us feel good, which, in turn, increases a person's motivation to seek more novelty.

Change to what is OOH entertainment

What the time data we analyzed doesn't capture is a cultural shift in what is considered and valued as entertainment. More than half of Americans now consider themselves foodies (53%). Foodies love food and are very interested in trying different types of food. They are on a quest for adventure and discovery with food and drink and the latest culinary trends. This has resulted in many dining out occasions now being considered as entertainment. Almost two-thirds (62%) of millennials, the prime age group for many forms of OOH entertainment, now consider a good night out as more about the food, three times the percentage that rate live music as a good time out. Millennials prefer to go out to a restaurant over any other type of OOH entertainment, including the cinema, concerts and live events.

Along with restaurant dining, there has been a growth in the number of live and special events and festivals where the focus or a major component is food, beer and wine. 62% of Americans would go to an event just for the food..The craft brewery boom has resulted in many destination breweries. The number of destination wineries and distilleries is also growing across the country. Visits to many of these are now considered OOH entertainment.

There is another influence that is driving variety seeking of new experiences rather than repeat visits, especially for teenagers and younger adults including millennials. In the experience economy, priorities for participation in leisure and entertainment experiences have changed. The dimension of status and self-identity, the measure of social capital has shifted from owning envious material goods and stuff to participating in envious experiences. Today, what you do now matters way more than what you own. Nearly three-quarters (74%) of Americans prioritize experiences over products. Especially for younger adults, an impressive selfie capturing a memorable leisure experience is as enviable as a new car or fancy watch was to their parents. Conspicuous consumption has been transformed by social media. Conspicuous consumption of goods is out, conspicuous leisure consumption is in.

The new experience economy means that the pursuit of experiences, including entertainment, has taken on a more prominent role in people's lives than in the past. People are using experiences as "social signaling" - to express who they are or want to be, to build their identity and status, their social capital on social media. Two-thirds of Americans would rather be known for their experiences than their possessions. Experiences are the ultimate status symbol, especially for millennials. Experiences, including OOH E&A, are the new social currency.

The importance of experiences as status and social currency has been amplified by the adoption and growth of social media, and especially, the introduction of the smartphone just twelve years ago. Now you can instantly broadcast the experiences you are having on Facebook, Instagram and other social apps. 48% of millennials and 61% of millennial parents say they attend live events so they have something to share on social channels.

Postings on social media can be viewed as important as the experiences themselves. For 20- and 30-somethings especially, if it isn't Instagrammable, if it isn't sharable, it's probably not worth doing.

Judy Wajcman in her book Pressed for Timeargues that we live in a time where we want to make the most productive use of our leisure time, so we have an insatiable desire to pursue and experience as many options as possible from the vast array of leisure opportunities the world now offers. As a result, we are seeking a variety of collectable leisure experiences that we only do once. We want to check off items on our experiential check list, move on to the next one and add to our collection in order to build our experiential CVs. This also makes us feel that we have used our time productively.

This means that once you've participated in some OOH entertainment experience and shared it with your friends and followers on social media, there is no longer any status value to be gained by repeating and sharing it again.

Influence of envy and FOMO

To get people to spend their leisure time and then their money at any OOH experience requires getting their attention in an increasingly distractible world amidst an increasing wide array of options available for spending that time. Seeing peoples' conspicuous leisure postings on social media generates that attention and motivates people to experience things they otherwise might never have known about.

Experience postings on social media results in FOMO (fear of missing out), creating the desire and motivation to participate in the same experiences that people are doing, to "keep up with the Jones." This has increased conspicuous leisure, participation in and posting of as many unique, novel and admirable experiences as possible and to not miss out on anything. Conspicuous leisure consumption amplified by social media postings and resulting FOMO have become major motivations for participating in as wide a variety of OOH experiences as possible rather than repeating a few.

Amplifying the desire for new and unique OOH leisure experience is the recent and growing explosion of OOH options that are now almost limitless.

At the beginning of the 21stCentury, community-based entertainment venues were limited to a small variety of family entertainment centers. In the last decade we have seen a massive expansion of new types of LBEs including trampoline parks, iFly, adventure parks, escape rooms, zip line experiences, bar arcades, eSport lounges, axe throwing, social eatertainment centers with participatory games and destination-worthy food and drink such as Punch Bowl Socialand Top Golf, eatertainment venues where you can bring your dog, VR, corn mazes/pumpkin patches, golf swing suites, cocktails and mini golf, to name just a few. 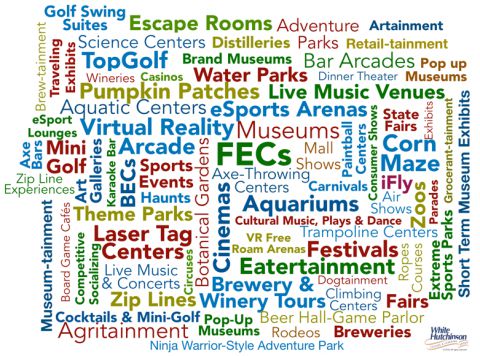 Now there is little reason to repeat the visit to any OOH venue or event due to the growing expansion of the wide variety of OOH A&E options, including the growth of the number of festivals, live events, foodie-worthy restaurants, breweries, distilleries and wineries that satisfy conspicuous leisure consumption and for posting on social media.

There is now a major shift to variety seeking rather than repeat visits to the same OOH experience. Non-attractions - one- and limited-time events (O&LTEs) such as live events, festivals and concerts - are now winning a greater share of guests' time and wallets.

More than half of millennials say they go to festivals "to experience something new." And half of the attendees say they attended a live event so they had something to share online. Many types of brick-and-mortar, fixed-attraction entertainment venues have lost their repeat appeal (been there, done that) to all the O&LTEs and new type OOH E&A that are posting-worthy on social media and can satisfy the appetite for conspicuous leisure.

With the possible exception of moviegoing, the decline in attendance that many traditional OOH entertainment venues are experiencing, especially due to declining repeat attendance, is not due to increasing participation in or time playing video games. Instead, the OOH entertainment consumer, their preferences, expectations, values and behaviors have dramatically changed. As a result, there has been a transformative and seismic change in out-of-home entertainment culture that is shifting market share away from family entertainment center business models focused on fixed attractions to an expanding selection and variety of one- and limited-time, live, new and unique OOH experiences, including many food and beverage experiences now considered as entertainment. Heavily influenced by the values of the experience economy, conspicuous leisure and social media, repeat appeal has lost out to "been there, done that" and the desire to move on to the greatly expanded landscape of all the new and sharable OOH experiences options that are now capturing consumers' attention, time and money.