The no vacation trend continues

Back in September we reported that there really isn't a staycation trend, but rather the true trend is no vacation. Back then a skift.com survey found that 43% of Americans said they did not take a single day of vacation during the summer of 2014. Now we have the results from skift.com for the entire 2014-year and the results aren't any better. 41% of Americans said they didn't take a single vacation day during 2014. That's an awful lot of people who didn't spend a single dime on entertainment on vacation. 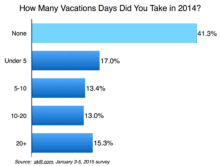 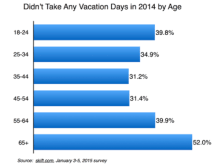 This sure helps to explain why participation and spending on location-based entertainment and arts admissions and fees on trips and vacations has been on a long-term decline. 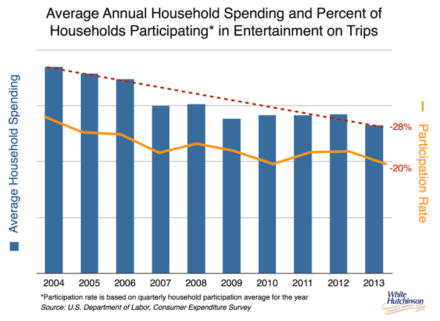 The rate of decline in both participation and average household spending closely parallels the decline in vacation days.

So what we are seeing overall is both a decline in the number of households spending on entertainment and arts on trips and vacation and a decline in the amount the remaining participants are spending each year (adjusted for inflation), most likely due to a combination of them taking less trips as well as spending less on each trip. 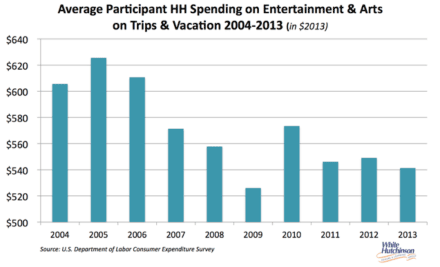 The big question is will this downward no vacation trend continue and as a result, will we continue to see a decline in both participation and overall spending on entertainment on vacations and trips?

P.S. There can be little doubt that digital hiving is contributing to the no vacation trend. Check out our article in this issue: The rise of super Digital Hiving.