The power of live events

We've written a lot in issues of this Leisure eNewsletter about spending and participation trends with out-of-home community entertainment. However, we've never delved into analysis of live versus non-live entertainment. By live entertainment we are referring to attendance at a music performance or concert, some type of theater performance or attending a sports event. Non-live includes movie theaters, museums, zoos, and most activities at family entertainment centers where the entertainment is interacting with some sort of equipment such as driving go-karts, playing a game, shooting a laser gun or rolling a bowling ball. 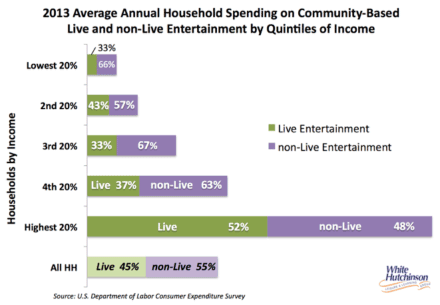 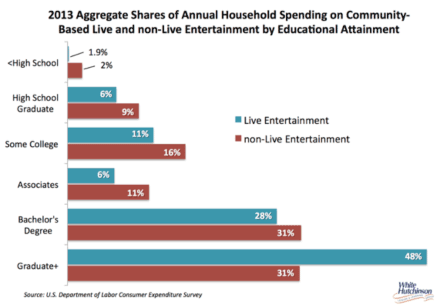 Obviously, the high cost of most live entertainment and sport events accounts for a lot of this pattern of high spending by the highest socioeconomic households - the lower socioeconomic households just can't afford it, or at least not that often. Conversely, the power of in-person live events, their High Fidelity, accounts for garnering the majority of the highest socioeconomic households community entertainment spending. In-person live events are uniquely powerful experiences. There is the power of being together in a theater, a club or stadium full of other people sharing the same experience as you. And smartphones allow photos and videos to be uploaded to social media to share with your friends who aren't there and to acquire social cachet. The limited time availability of live events also greatly enhances their appeal.

Why is it important to understand this pattern? It's because the top 40% of income households, basically the upper-middle and higher income households, account for three-quarters of all community-based entertainment spending. They are the market to target. And of their spending, almost one-half is devoted to live events. They have the discretionary incomes to afford live events, and obviously the High Fidelity of in-person attendance at live events has high appeal to them.

Like the overall trend of decreasing participation and spending at location-based entertainment venues we have been reporting on in this eNewsletter, there is also a trend of a decreasing percentage of the population attending live events, and of those that do, a decrease in the number of events they attend each year for sporting events and music concepts. The one exception for this is for family live events where participation has held steady for the past four years and there has been an increase in the number of times attending each year.