The problem with most pre-Internet mass media is that you end up paying for ad exposures to people who don't have the potential to become your customers. For example, a major metropolitan newspaper will have a geographic circulation area that is much larger than your trade area and many of its subscribers within your trade area will have demographics that don't match your target customer. You end up paying for ad exposures to many people that have no potential to become customers. The same is true with radio and television.

The days of using old style mass media (television, radio and print) is now history. Social media is now the way to go, and now Facebook is the prime candidate. 133,500,000 people, 43% of American adults and a far higher percentage of American teenagers, are Facebook subscribers. Of course, a Facebook page is now essential and a great way to have conversations with your customers and followers and market your business. However, now you can use Facebook to send your post to non-followers and target exactly the demographics you want by age range, geographic area, gender and even specific interests. 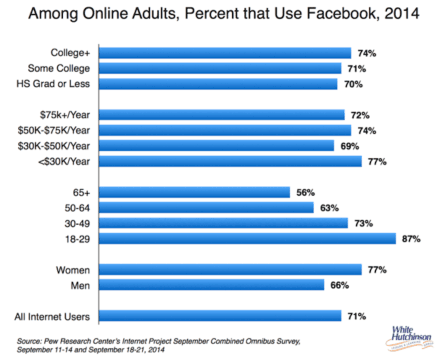 It's called a Facebook boost your post. On the page where you make a post, there is a blue button on the right just below your post that reads “Boost Post.” Click on it. On the page that opens, you can specific exactly the audience you want to reach based upon their demographics, where they live and their interests, which you define with keywords. After you specify the target audience you want you post to go to, you specify how much money you want to spend. The site will then show you how many people that amount will reach. Then, finally, you define how many days you want to boost the post and then click “boost” to expand your Facebook marketing reach.

You can learn more about boosting your posts at the Facebook Help Center.