Bowling is a classic. Invented over 5,000 years ago in Ancient Egypt as a 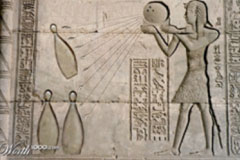 way for the Pharaohs to pass the time between cat-embalming and pyramid construction, bowling has been around for as long as people had arms and a desire to knock things down with a ball. Over the many, many years since it was invented, bowling has undergone many major transformations.

In the past few years the bowling industry is undergoing its latest major transformation from once being dominated by league bowlers to one that now must attract the casual bowler to prosper. Many old and worn-out bowling alleys are closing. Between mid-2008 and mid-2013, the number of commercial bowling centers declined by 11% and the number of lanes declined by the same percentage. As of June 2013, the U.S. was down to 4,800 commercial bowling centers.

Of the centers that did not close, a number were renovated and others were turned into multi-anchored entertainment centers. Meanwhile a whole new breed of upscale bowling-anchored and multi-anchored centers are being developed that solely target an upscale, casual, social bowler. These range from adult-oriented boutique bowling centers with bars to larger bowling lounges to centers with destination dining. 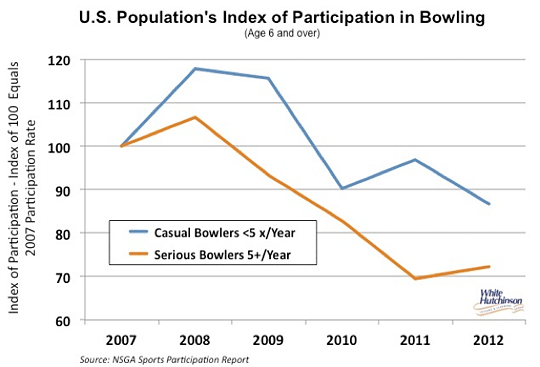 Bowling centers have not been closing as fast as the bowling population has been on the decline. As a result, in 2012 there were one-tenth less (-11%) bowlers per lane than in 2007. And since a greater percentage of those bowlers were casual bowlers in 2012 than in 2007, the number of games played per lane has declined even faster. Since the casual upscale bowlers favor the newer upscale centers, this is sure to accelerate the closure rate of old alleys in the coming years.

The prime age group of bowlers for bowling participation is the 7 to 44 age group. In 2012 one-fifth (21%) of that age population bowled at least once. 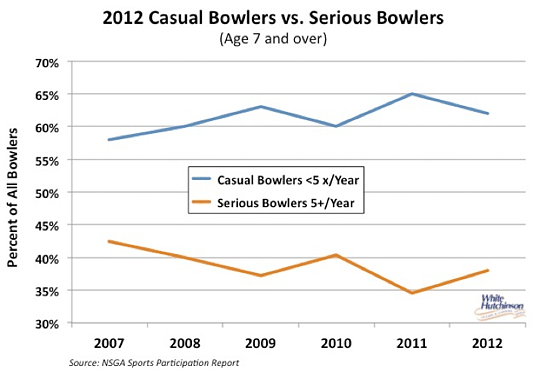 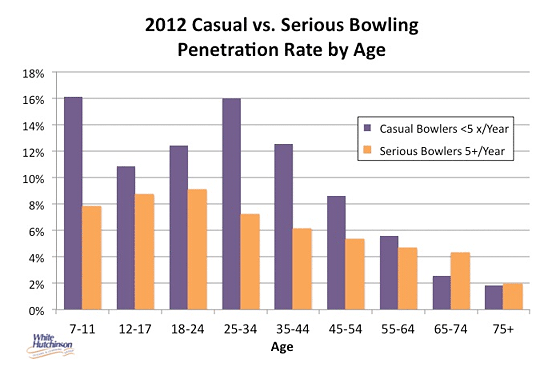 The decline in bowlers of all types does not mean bowling is dying. What is dying is the older breed of bowler, the league bowler, and the old tired bowling alleys that catered to them. Meanwhile, the new upscale bowling centers that are catering to the 44 and under age group of upscale casual bowlers who come for the social experience, the food and beverage and not primarily to bowl are thriving.

This also indicates there is an elastic demand for upscale casual bowling. Many, in fact most, areas throughout the country don’t have any upscale bowling facilities. Even large metros still have very few. So much of the population does not yet have the option of frequenting one of the newer concepts where they would want to go. So as more new facilities are opened, we should see an increase in casual bowling participation rate.

It's a whole new ball game for bowling. Those centers that cater to the expectations of the new upscale bowler will prosper.