Why so many FECs have marginal success or fail

A version of this article first appeared on Randy White’s blog.

Over our company’s 22-years working in the location-based entertainment (LBE) and family entertainment center (FEC) industries, which includes bowling and other community-based entertainment venues, we have been retained by many clients to analyze their poorly performing centers and develop a turnaround strategy to improve their performance. The recent economic downturn has increased that portion of our business, as those facilities that might have been marginally profitable before the Great Recession now find themselves under water.

In almost all situations, the issue of non-existent or minimal profits is attributable to inadequate revenues due to low attendance and low per capita spending. Over the past two decades, our analysis of such problem centers has consistently found that for the vast majority, the root cause of the poor performance was due to either or both a:

The focus problem boils down to the owners thinking the road to success in the family entertainment center industry is a broad definition of ‘family’, having a little bit of something for everyone, something for every age group. I remember many of the earlier indoor FECs in the 1990s that said they were targeting families, but included a billiards area. Then the owners wondered why they weren’t attracting as many families as they had hoped. I won’t dwell on this issue, as I have written extensively about the need for focused assortment over the years. The bottom line is that to be successful, you need to shoot with a laser at a narrow market niche rather than shoot at the entire population with a shotgun. You can’t be all things to all people, but you can be very special to a particular market niche. Then you will also get secondary markets, although you didn’t specifically design for them. This is a basic proven principal of marketing that applies to almost all retail, restaurant and community-based entertainment type venues that depend on high repeat business and loyal customers. Just think of all the different women’s dress stores there are and how each brand has a sharp focus. Another example is clothing stores that target tweens and teens such as Abercrombie & Fitch and Buckle. (This does not necessarily apply to mega stores such as department stores or Targets or large attractions like theme parks, as they are large enough to offer a broad enough selection for a number of target markets)

The second root cause, a mismatch with the market areas’ socio-economic/lifestyles, also relates to a need to focus on a particular market niche, but rather than the niche being defined solely by age, types of activities and type of groups, such as young children, a family with children ages 5-12 or young adults, the niche needs to also be defined by socio-economic/lifestyles. As much as no one wants to admit it, we humans are class conscious and like to hang out with people like ourselves in terms of our tastes, values and lifestyles. Birds of a feather like to flock together. This is especially true for indoor entertainment venues where dissimilar socio-economics just don’t mix.

Different socio-economic/lifestyle groups have different expectations about quality, which in LBEs deal basically with overall quality including ambiance or décor, customer service and the food.

Where we find most LBEs miss the boat is in failing to design their facilities to the level of quality to attract the upper socio-economic market, which we will call the upscale market. This market segment accounts for three-quarters of all out-of-home entertainment spending and 64% of all restaurant spending. What those LBEs did was offer Walmarts to markets where the majority of households wanted Targets or Nordstrom’s (actually I am being kind comparing them to Walmart, as Walmart is professionally designed whereas many LBE are amateur in design).

When it comes to the quality of the physical facility— the ambiance, décor, or what we call quality-of-place—staff training and menu development, the LBEs failed to make an adequate investment – they under spent. That’s right, their centers didn’t cost enough. This is the opposite of the popularly held belief that you can maximize return-on-investment by spending the least amount of money. Walmarts cost less to build than Targets and Nordstrom’s. P.F Chang’s China Bistro costs more to build than your local Chinese restaurant or a Denny’s. They all are designed to attract a particular socio-economic. 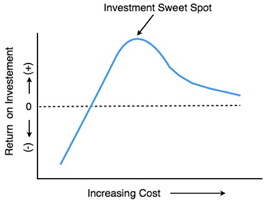 The investment sweet spot varies with the particular socio-economic/lifestyle group the LBE is targeting. The higher you go up the socio-economic ladder, the greater the investment required to attract them. It takes a much higher level of finish, service and food to please an upscale market. But for that added investment, you achieve the highest repeat business and higher prices, resulting in higher revenues. Invest too little and they might not show up at all.

In many of the poorly performing centers we examined, we traced the cause of the under investment back to the feasibility study, where neither the target market, in terms of age and type of group, nor the socio-economic/lifestyle segment with the best market opportunity was defined and with it, what was required to attract them. Good feasibility studies deal with much more than numbers. They are about thoroughly analyzing a market and competition, and then defining the best LBE brand identity and characteristics to create the most successful project.

Success deals with much more than the mix of the entertainment. It deals with the entire emotional experience the guest has based upon their expectations and their need to feel that the LBE reflects who they are and their values and tastes. Only by defining who the guests are that should be targeted, including their socio-economics, and determining the needed attributes and quality required to attract them can LBEs find the investment sweet spot of maximum success.