Not All Populations are Created Equal: Understanding the Differences to Maximize Success

Feasibility studies consist of a series of very specific steps:

This article will not attempt to discuss all these steps. Rather it will focus on step #3, analysis of the market area population.

There is common misunderstanding in the location-based entertainment industry that the number of people living in the market area (and sometimes the number of tourists) is the key factor in determining attendance and revenues. Some people in the industry even subscribe to rules of thumb, such as a population of so many people will support a particular type of project. Nothing can be further from the truth. Not all populations are created equal.

However, the analysis doesn't stop there. Income and education have a dramatic impact on frequency of visits and per capita spending. Using the same illustration, two different populations of 20,000 families with 16,000 children ages 6 to 14 will not be the same and their potential spending potentials will be very different.

Let's first take a look at the influence of household income on entertainment spending. Information from the U.S. Bureau of Labor Statistics Consumer Expenditure Survey (CES), based on data from 10,000 households reveals a dramatic difference in annual entertainment spending based on income. The survey includes a category for 'entertainment fees and admissions' that includes theme parks, FECs, zoos, etc. which we will refer to as out-of-home entertainment.

One additional category of expenditure, food away-from-home (in-restaurant dining), is also related to expenditures at location-based entertainment facilities. The graph below shows the results for both.

The effect of household characteristics on out-of-home entertainment and dining is much more complex than just looking at income and education. Spending is also influenced by region of the country, occupation, the age and number of children, the age of the head-of-household, ethnicity and whether the household rents or owns a home and lives in the country or an urban area. For example, households headed by managers spend twice as much on out-of-home entertainment as construction workers, mechanics and technical sales and clerical workers; homeowners spend twice as much as renters and households in urban areas spend twice as much as those living in rural areas.

Accordingly, determining potential revenues for a project requires a rather complex analysis, much more than just looking at the number of targeted households and age groups. Any two populations with the same population, or even with the identical number of target households, will have very different out-of-home spending potentials. Not all populations are created equal when it comes to out-of-home entertainment spending.

One of the most effective ways to analyze target populations and their potential spending is to look at their socio-economics/lifestyles ("SELs"). This not only categorizes a population by demographic characteristics, such as income, education, age, occupation and type and location of residence, but also by their psychographics-their values, tastes and patterns of consumer behavior. This gives much more targeted information about their spending. Not only that, but it also gives important information about their needs, tastes, preferences, values, hopes and fears, which is important to customizing a project's offerings, design and operations to its targeted market.

It is not possible to design a community-based entertainment venue that will appeal to all the possible SELs of families with children 6-14 within a market area, unless of course, the market area is very homogeneous. That is rarely the case. To be successful, a community-based entertainment facility needs to target a particular grouping of SELs, not the entire spectrum. Successful businesses shoot with a rifle at a target market rather than with a shotgun at the entire population. If you try to be all things to all people, you only dilute the appeal and end up being nothing special to everyone. The spending potential might exist in the market place, but you won't capture the maximum by casting a wide net.

SEL targeting is a proven practice in the retail, restaurant and service industries. Ruth Chris' restaurants target and appeal to a completely different group of SELs (broadly white-collar) than Outback (broadly blue-collar). The Limited women's clothing store targets a completely different SEL and age group than Talbots. Courtyard by Marriott, Motel 8 and the Hyatt all target different customers. That's why they are successful. They target a narrow niche of customers, and then carefully craft their offerings to have the maximum appeal to them. Often that niche is a very small segment of the population. Many successful concepts attract as little as five percent of the overall population as their customer base. This concept of targeting is know as focused assortment-focusing on both a niche market and category of product or service and offering that niche market an assortment within that category that is targeted to their tastes, needs, preferences and values.

Let me give you a real live example of how this counterintuitive market approach really works. Our office is located in Westport, an inner-city area of Kansas City, Missouri. Westport is as close as you can get in Kansas City to a 'Greenwich Village'. Westport is an older commercial area with what I call urban diversity-the total spectrum of socio-economic people, shops and restaurants.

Ten years ago the Westport Café, an independently owned coffeehouse, opened a block from our office. 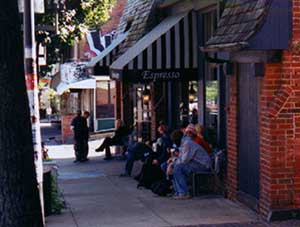 Then, four years ago it was announced that Starbucks planned to open an outlet right next door to them. Fearing that their café wouldn't survive the competition of a Starbucks, the owners collected a petition with a thousand signatures from customers and presented it to city leaders to stop Starbucks. Nevertheless, Starbucks was successful in obtaining its city approvals and opened. 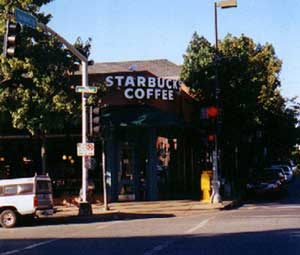 This doesn't seem possible. A competitor opens right next door, and a very aggressive and successful competitor at that, and sales increase? What is going on to cause this?

Let's go back to SELs and take a look at the customers of each coffeehouse. You can watch Starbucks' customers come and go, especially at the peak morning hours. BMW's, Mercedes, and late model SUVs can be seen parking and their drivers running into Starbucks to pick up their lattes or whatever. These customers are well dressed with well-tailored clothes, and obviously most are professionals and white-collar workers. Right next door, customers come and go from the Westport Café coffeehouse. However, many arrive by bicycle, in older model cars, many with bumper stickers, or even walk. For lack of a better descriptor, those customers are bohemian in character.

Now let's take a look at the décor and atmosphere of the two coffeehouses. Starbucks is very contemporary, with wood finishes and an upscale atmosphere. The Westport Café is more on the funky side, down to earth and a little worn around the edges, with furniture that doesn't match and a homemade character.

What we have is two completely different coffeehouses, which are successfully targeting two completely different groups of SELs. In fact, the customers of one would probably not want to even be seen in the other. Each coffeehouse is focused on a completely different niche of customers. That is why Starbucks' opening didn't take any sales away from the Westport Café. There was a latent demand for coffee from a white-collar market that the Westport Café wasn't satisfying, as their atmosphere and presentation didn't match that market. It wasn't until Starbucks opened that that latent demand was satisfied.

Just to expand on this concept a little further, although both coffeehouses are less than a one-block walk from our office, I personally walk two blocks to Einstein Bros. to buy my morning coffee. Why? Because Einstein Bros. is a better match to my tastes, both for coffee and atmosphere, than either Starbucks or the Westport Café. And in the same area, there is a Panera Bread Bakery-Café, where you can see other customers coming and going in the morning for their coffee.

This illustrates the successful concept of targeting a niche market based upon socio-economic/lifestyles. Not only are all populations not equal, but also within any population there are subpopulations that are very different, and often incompatible. As the expression says, "Birds of a feather flock together." You have to design the nest to attract the particular variety of birds you want to attract.

What this time-proven marketing principal means to community-based entertainment facilities is that they cannot successfully attract an entire market area population. Rather, each must select a targeted niche market within that population and design the all aspects of the business to appeal to them.

This is where most entertainment facilities miss the mark, and often pay dearly. The conventional wisdom seems to be that everyone will come for entertainment. That is true, just like all coffee drinkers will buy coffee. But they will only buy it if the coffeehouse matches their tastes, both for the coffee as well as the décor, atmosphere and service. Not all coffee drinkers in any market will frequent the same coffeehouse. In fact, if the existing coffeehouses don't match their tastes, they won't buy from any coffeehouse. In our Westport case history, the current Starbucks' customers weren't buying coffee at the Westport Café before Starbucks opened. They probably weren't stopping anywhere for coffee.

What this means is that out-of-home entertainment spending is not a zero-sum game, i.e., there is not a fixed amount of money being spent on it and the strategy is to get the largest piece of the pie. In most markets, there is latent spending potential that is not being captured, as there are no entertainment facilities that match the tastes of many customers. In Westport, the overall market coffee sales increased when Starbucks opened-the pie got larger when the latent spending potential was captured.

Our company's research over the past thirteen years shows that many entertainment markets are like Westport before Starbucks opened. There may be existing entertainment facilities, but they are only capturing some of the out-of-home entertainment potential. And just like Starbucks attracted a white-collar market when its preexisting competitor was not, our observation is that most community-based entertainment centers are not attracting the white-collar family market, leaving a large untapped potential in those markets.

That potential grows every year, as our society becomes more and more educated and the percentage of knowledge workers grows. Contemporary consumers are seeking more sophisticated concepts, with better ambiance and design, and often ones that educate them or enrich their lives. According to the Economic Survey conducted by the U.S. Census Bureau, between 1998 and 2000, revenues increased by 15% for museums, historical sites and similar cultural institutions and by 16% for fitness and recreational sports centers. During the same period, sales in bowling centers increased by only 6% and family fun centers and arcade sales decreased by 4%. Our company's observation is that the dramatic difference between these growth rates is attributable to the failure of most community-based entertainment facilities to match contemporary tastes for the more upscale groups of SELs who control the greatest share of out-of-home entertainment spending.

Two successful entertainment chains have successfully identified this market opportunity with the young adult market. Both Dave & Busters and Jillian's have developed successful facilities, many with sales exceeding $10 million, in markets that had many other facilities targeting young adults, but that didn't match the SELs of more upscale young adults.

This is why it is so important when doing a market feasibility study to not only identify the SELs, but to determine which compatibility grouping of SELs should be targeted. And once that is determined, it is important to identify the design and operational characteristics required for the entertainment center to capture the maximum amount of their spending potential. Then the center must be developed and operated to match the targeted markets' tastes, needs, values, and preferences.

Not all market areas are created equal. And not all populations within any one market area are equal. Understanding these differences and targeting a niche market population with a focused assortment is a critical factor for success with community-based entertainment facilities.

See our follow-up story about the success of the Westport Café.