Trends we identified only a few months ago concerning shifts in away-from-home entertainment spending have accelerated faster than anyone dreamed possible, fueled by soaring gas prices. Read on to discover how will this impact the leisure industry -- and which income-level of consumers will be hardest hit. 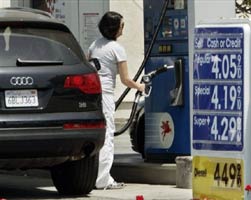 When we wrote that two-part article, we didn't anticipate how quickly increases to energy and food costs would accelerate. Now, with oil prices bouncing around above $140 a barrel, gasoline prices north of $4 per gallon and more than 20 percent of Americans paying $100+ to fill their gas tanks, it looks like Americans are in for price increases unimaginable just a few months ago. With droughts in Australia and floods in America, a global situation where food demand begins to exceed supply has suddenly gone from bad to worse. And the high cost of energy evident at the gas pumps is just starting to work its way into electric, natural gas and heating oil costs.

There is a general consensus that in the next year or so, we will see electric, natural gas and heating oil costs increase by 50 percent. And food costs are projected to increase at an annual rate of 7 to 9 percent for at least the next three years. Those costs have already increased this year at an annual rate of 6.3 percent, and that's before the impact of floods, drought and spike in gasoline and diesel fuel costs has worked its way into the cost of production, supply and distribution chain.

So what impact is this likely to have on the restaurant and away-from-home entertainment industries? In some respects, for certain consumer market segments, things are going to get rather bloody. We prepared the following analysis to try to better understand the impact of these sudden and continuing price increase may have.

We looked at 2006 household expenditures (the most recent data available) as a percentage of after-tax income, for the five different quintiles of household income. Then we projected price increases for food, energy and health care to see the potential impact on restaurant and out-of-home entertainment spending in 2009. 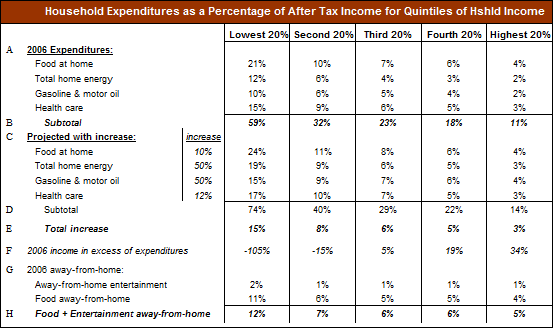 Section "A" shows 2006 expenditures for the five quintiles of household income as the percent that spending in each category was of total after-tax income. Row "B" shows that households in the third quintile of income spent 23 percent of after-tax income for food at-home, energy (gasoline, electricity and home natural gas and heating oil) in 2006.

The situation will be less severe for the fourth and fifth highest quintiles, where the projected price increases will consume a lesser percentage of their after-tax income. Because their after-tax income is far greater than all their expenditures, they have some cushion for dealing with the increased costs.

The first three quintiles -- the lower percent of households by income - will suffer some serious hardships and have to make serious cuts to their restaurant and away-from-home entertainment spending. The upper two quintiles will probably do some trimming to that spending. Or at the very least, they will be much more fastidious in their choices.

And all entertainment destinations will need to sharpen their acts to compete with electronics. Electronic games, Internet-based games, television and DVDs are a far better buy in terms of cost per hour of entertainment when compared to entertainment venues. Nevertheless, consumers will not want to be held 100 percent captive in their homes and will seek out destinations where they can socialize and have fun. Entertainment venues that are also dining destinations, what we call eatertainment, will have a strong competitive advantage for two reasons: less driving required when consumers go out to eat and play, and one-stop shopping saves time in a society increasingly experiencing time-poverty. More than ever before, consumers will ask, "Can you give me a compelling reason to come to your place?"