Concepts for new leisure attractions constantly come and go, but few catch on with the public. We believe Cyber Sport, a new interactive team attraction that combines hockey, basketball, lacrosse and bumper cars, may find long-term success. Read on to find out how to get in the game.

It's not often a completely new attraction is developed that has the probability of long-term success. We believe Cyber Sport, developed by a company founded by Jim Kessler may just fit that description. Kessler is the co-owner and original developer of the highly successful 10-year-old LASERTRON Interactive Entertainment Center in Buffalo, New York.

We have great respect for Kessler. He is a very smart operator and has pioneered a number of concepts at his LASERTRON Center, including the concept of reservations for laser tag.

Cyber Sport is a combination of lacrosse, basketball and hockey played with two teams of five members each driving custom cars on a 40 foot x 60 foot court. Each player is equipped with a one-handed scoop used to pick up, pass and shoot the ball during a Cyber Sport session. Each session of Cyber Sport consists of three, eight-minute games. Each team must begin the game on their half of the court. The Ride Operator starts the first game by throwing the ball out onto the center line and into the throw-in circle. At the end of each game, both teams return to their side of the court and the losing team starts with the ball (unless the last game resulted in a tie, which results in another throw-in by the Ride Operator). Goals are mounted at each end of the court and each goal has three or more openings. Points are awarded to the team that can get the ball through one of the openings of their opponent's goal. Once a goal is scored, the team that did not score immediately takes possession of the ball. The team that wins two or more games of the session is the overall winner. 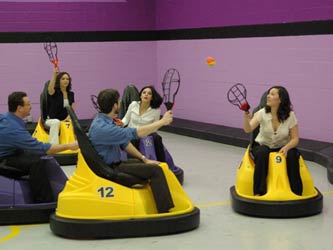 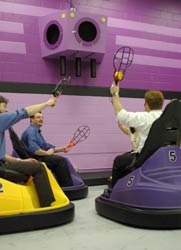 Cyber Sport is recommended for players 54" or taller or age 10 and older.

To see a short video of Cyber Sport in action, click here.

The idea for Cyber Sport came about when Kessler was looking for a new attraction for the center that required less space and appealed to both male and female adults. After analyzing several different opportunities, they decided to go with Cyber Sport, and the Kessler development team spent over four years developing the concept. In July of 2006, the first prototype Cyber Sport system was installed in the LASERTRON Interactive Entertainment Center. In December 2007 it was upgraded with the first production model. They are now selling licensed territories for Cyber Sport. The next facility is scheduled to open in September in Addison, Illinois. The LASERTRON Center is now in the process of installing a second court.