Our two projects in Kazakhstan brought me back to the capital city Astana, (spelled Actaha in Russian) located in the center of the country, and Uralsk, also know as Oral, in far northwest Kazakhstan. I find it quite exciting to be working in a post-Coca-Cola, pre-McDonald's and pre-Starbuck's culture. Yes, you read that correctly; you can buy Coke and Pepsi, even Coca-Cola Light and Coke Zero in Astana, but there is no McDonald's or other Western fast food chains to be found in the entire country - let alone a Starbuck's. Thank goodness there's at least one country that is still authentic and has been spared from American food imperialism. No doubt it won't last long.

On all our projects, whether international or domestic, we do extensive ethnographic and cultural research. Rather than just export standard Western project solutions, we tailor the project to its culture, developing the project's brand identity, in part, to celebrate that culture. You can read more about culturally competent design in the article, The importance of cultural competence to location-based leisure projects.

Our initial research into Kazakhstan's cultural identity puzzled us. We surveyed a number of mothers and asked them:

We basically got answers that indicated there was nothing about Kazakh culture they cared about or wanted their children to learn. For a country with such a long history of greatness, this seemed a baffling response. How can 16 million people lack a cultural identity? How can you know what you are as a country if you don't embrace your past?

We had hints of this when we first visited Astana and saw its eclectic architectural styles that include Islamic, Soviet, Western and wacky futuristic designs (click for slide show of Astana buildings). Unlike most American, European and Asian cities, Astana had no overriding architectural look or style.

So we went back to the drawing board to figure out what was going on. What we learned from research is you need to understand Kazakhstan's history to recognize what has resulted in what Yevgeny Zhovtis, one of the country's leading political scientists, declares, "There is a very big national identity crisis." Blame it on the Soviets.

Kazakhstan was among the first Soviet republics to experience nationalism in the early 1980s, which later swept through the entire Soviet Union. Once independence was achieved, the newly born states tapped into their historic memory, remembering and often re-interpreting their pre-Soviet past in order to learn how to live in their post-Soviet present. But Kazakhstan's historic memory proved to be lacking and its statehood had no roots of its own.

During the USSR's grand First Five Year Plan, the Kazakh nomadic tribes were forced to settle down and exchange their nomadic life to become settled farmers in new collectives. Rather than hand their herds over to State control, they slaughtered the herds. Unaccustomed to agriculture, they died by hundreds of thousands from famine and disease. Those who opposed collectivization were sent to labor camps or killed. At the same time, Kazakhs were forced to give up their oral tradition for Russian and European influenced literature, art and music. The Soviets also altered history by drawing new borders. They filled the vast Kazakh steppe with industrial cities with millions of people (including prisoners) from all corners of the Soviet Union. By the 1930s, Stalin had turned Kazakhstan into a human trash bin for the Soviet Union. Millions of men, women and children were sent to concentration and labor camps Russia built in the Kazakh steppe. Most of those who managed to survive stayed in Kazakhstan, resulting in its diverse, multicultural society. As the only Central Asian republic with a border with Russia, Kazakhstan became the most ‘Russified' of its territories. During the Soviet domination, little was taught about Kazakh history. One former school teacher reported textbooks contained only five pages about Kazakhstan's history. When Kazakhstan gained independence in 1991, only 40 percent of its population were ethnic Kazakhs. Few spoke the Kazakh language. Their nomadic ancestors left almost no written records; their rich oral tradition was wiped out. With independence, Kazakhs found it difficult, if not impossible, to remember what their culture was like before the Russians arrived. Without a collective memory of their pre-Tsarist Kazakh history or of their stories, art, music and other traditions, cultural identity doesn't exist. This is especially true, since less than half the population had ancestors who lived in Kazakhstan during the great era of pre-Tsarish Kazakh culture.

Kazakhstan now has the rare and challenging opportunity to create a country based on citizenship instead of blood ties. 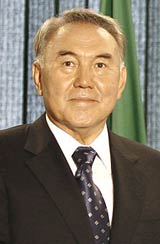 In a recent BBC interview, President Nursultan Nazarbayev, who has been in power since the Soviet days, says he has done just that. "We are the most multiethnic of all post-Soviet republics. As the result of Stalin's policies, we have people of 130 nationalities living here -- these are people who lived through true terrible catastrophes and hardships. That's why the first thing we did when we gained independence was to create equality for all."

President Nazarbayev is trying to form the new national identity by bringing back the Kazakh language as the national language, instead of the currently spoken Russian language. It is being taught in all the schools. All government bureaucrats are required to take Kazakh classes and pass language tests. There is also discussion about switching from using the Cyrillic alphabet for the Kazakh language to the Latin alphabet. This is the same switch Turkey and the former Soviet republics Azerbaijan, Turkmenistan and Uzbekistan have made. Along with the usual arguments for alphabet change, especially helping to integrate the country into the global economy, government officials have argued that a Latin alphabet could help Kazakhstan forge a more cohesive national identity, moving it out of Russia's shadow. "Switching the Kazakh alphabet to Latin means for Kazakhs changing the Soviet (colonial) identity, which still largely dominates the national consciousness, to a sovereign (Kazakh) identity," stated a Kazakhstan Ministry of Education and Science report. "Among the many arguments in favor of switching the Kazakh alphabet to Latin, boosting the national identity of the Kazakh people is the main and decisive one."

Many citizens of Kazakhstan think there is a real conflict with President Nazarhabev attempt to build an identity based on multiculturalism while at the same time basing it upon ethnic Kazakh tradition relating to only a minority of the population. Some believe that as a result, the government is not only alienating the majority of its population, but also creating a cultural myth.

The late Kazakh historian and academic, Nurbulat Masonov, explained it by comparing the Soviet legacy to a Russian matryoshka doll. Just as with the wooden nesting dolls, where each is smaller than the other, the Soviet-era Kazakhstan was created from layers of values and cultures. The smallest doll represents the Kazakh values, hidden in the heart of the big matryoshka. He said, "Kazakh culture was part of the hierarchy, but it was only a very small part. But now we are throwing out all the dolls and trying to blow our midget matryoshka into a colossal size, and assign her false achievements."

"All surveys conducted since independence show a very clear trend," says Yevgeny Zhovtis, "and the trend is non-Kazakhs do not feel they are part of the nation-building process. They are working here, they are living here, but they also feel like they are guests, and they don't associate their future with the country."

Only time will tell whether Kazakhs can find a unifying identity by merging their diversity with a revival or reinvention of the lost folk traditions. In that process, some fear, half the nation will be left behind.

Perhaps the country needs to throw a third building block into its national identity formula: the strong disdain for their Soviet era, which is a mindset probably shared by the majority of the population.

There are signs that Kazakhs are starting to rediscover some of their pre-Soviet culture. One example is Yedil Khusainov, a musician who has gained considerable fame in Kazakhstan by performing with 10 different ancient Kazakh folk instruments with the hauntingly beautiful skill of throat singing. He sings in two of the three styles of throat singing, kargara, low throat singing, and sygyr, high throat singing.

Meanwhile, back to the cultural identity issue, we are studying just how much of Kazakh culture will be appropriate to integrate into the two projects' brand identities. If that culture is only the smallest matryoshka doll, we will need to find a bigger doll to build the brand identities around.

In this issue
We are continuing our examination of economic and out-of-home entertainment trends that will forge the future. In the last several issues, we have looked at leisure expenditure trends of both money and time. Little could we have guessed just a few months ago how accelerated some of these economic trends would become. Now we see oil at $145 per barrel, and by the time you read this, it may be even higher. Food price increases are accelerating, as well. So in our article, The new leisure economy, we continue to look at the impact all this could, and probably will, have on many American households and the entertainment and restaurant industries.

We also take a look at bowling and the changes it has seen -- not only over the past decades, but more specifically, to the bowler base since 1999. Some findings may well surprise you.

We have information on a change in the e-mail anti-spam regulations you need to be aware of if you e-mail customers. You'll also find information on how to get free listings on several of the Web's most popular sites and to give your customers the opportunity to write online reviews. We also offer coverage on a new attraction that we think has legs, Cyber Sport.

There's even more, but we'll let you discover that on your own.

Print out a copy and take it with you for some informative reading on your vacation this summer or your next business trip.