For years, theme parks have added larger, faster and more thrilling rides in their quest to stay fresh and maintain attendance. Every year, we hear about some taller, faster, higher G-force and scarier rollercoaster being added to some amusement park.

Well, it looks like there is a change in the wind. Some parks are starting to realize that chasing the teenage crowd with thrill rides is not the best formula for success. Instead, they are refocusing on the family.

"The biggest trend we are seeing is a family-focus - a good, solid, multigenerational experience," says Beth Robertson, communications director for the International Association of Amusement Parks & Attractions (IAAPA). Paul Ruben, North American editor of Park World magazine, says, "Many parks have gone out of their way to improve the entire experience of the theme park visit... For years they thought the way to increase attendance was to bring in a compelling new thrill ride, but now they are realizing that things got out of balance and the family got left behind."

Many new rides, referred to as "mild thrills," are tamer, designed as immersive experiences the whole family can enjoy. The new Italian Job Turbo Coaster at Paramount's King's Dominion barely gets out of second gear, topping out at 40 miles per hour, just a third the speed of the fastest coasters. Even little kids can ride it. At Mount Olympus Water and Theme Park in Wisconsin, the Opa! Twister Coaster zigs and zags, but never drops more than 45 feet (14 meters).

This change is all based on economics. Mild thrill rides cost a lot less to build and maintain. Kingda Ka at Six Flags Great Adventure in Jackson, New Jersey, is billed as the world's tallest and faster coaster at 128-mph (206-kph). 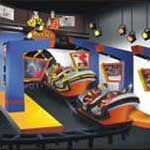 Six Flags, with 28 U.S. parks, has run into financial difficulties in recent years with declining attendance. Industry observers cite the chain's reputation for being teen-dominated. "We are trying to reset the balance between teens and families," says Six Flags' spokeswoman Wendy Goldberg. "There was a perception that Six Flags was good only for teens, not kids and adults.

Six Flags now considers the family market as central to its comeback. Smoking is now banned in all Six Flags parks. Daily parades are being added. Mark Shapiro, CEO, says, "We've got to jump into family waters. Family is an added opportunity for us to expand our business."

One thing that is now "in" in amusement parks are dark rides - rides where all ages enter tunnels, dungeons, and themed fantasy lands on self-propelled vehicles that can hold the entire family. Many of the dark rides offer interactivity, where riders can shoot at targets or monsters and earn scores for comparison at the end of the ride. One example is the new Men in Black ride at Universal Studios in Orlando, Florida.

To play a video of the Men in Black ride, click here.

Not only do family-oriented rides reduce capital expenses and maintenance costs for amusement parks, targeting families also increases revenues. According to theme-park consulting firm International Theme Park Services, a family of four spends 25% more than four teenagers during a day at the park. Amusement Business magazine reports the difference is as high as 40%, since teenagers often use season passes and forgo high-priced food and souvenirs.