Is Chuck E. Cheese's last decade's performance a harbinger of the future of children's entertainment?

The family entertainment center (FEC) industry is made up of a variety of different categories of projects and within each category there is wide variation from project to project. So other than analyzing attendance and customer spending on a broad nationwide macro basis, it is difficult, really impossible, to determine any longitudinal trends within any one category of project. But there is one exception, CEC Entertainment, Inc. that owns, operates and franchises Chuck E. Cheese’s eatertainment facilities. The history of CEC dates back over 35 years. They have been a public company for over 30 years, and as a public company, a wealth of information is available about their operations. As of December 31, 2012, CEC owned and operated 514 company-owned stores and had 51 franchised operations (many overseas). The facilities that CEC operates have been rather consistent in size, currently averaging 12,000 square feet, allowing for good longitudinal comparison (this is unlike Dave & Buster’s whose facilities have had a wide range of sizes over the past few years).

The following is our in-depth analysis of CEC’s performance for their last ten fiscal years – 2003 through the close of their 2012 fiscal year (their fiscal years are on a calendar year basis). Our analysis includes a lot of numbers. We have tried to make our analysis as easy to follow and understand as possible by using a lot of graphs to illustrate points.

For our analysis, we did two things. First we excluded CEC’s revenues for franchise fees so we were only examining performance of company owned and operated stores (operating data on franchised stores is not publically available). Secondly, we adjusted for the declining value of the dollar by also adjusting for inflation, which was 19.9% over the ten years. 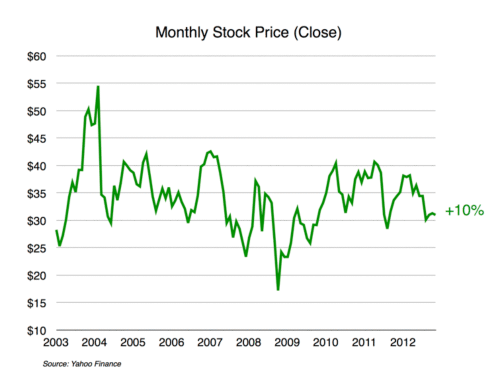 When you add in the value of dividends CEC has paid, the stock’s performance is even better, up 86% in investment value, which is significantly greater than the inflation rate. Even if you adjust for inflation, the stock shows a 49% appreciation in overall value. 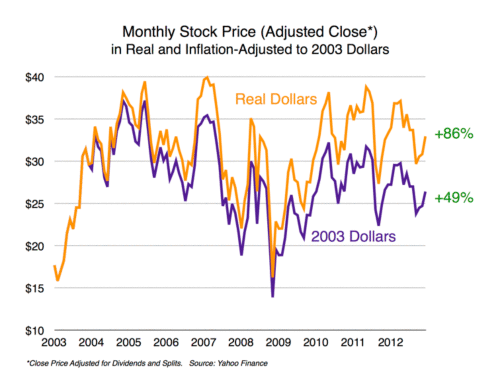 Part of the reason for the stock’s good performance is the growth of total company store sales. They are up 23%, but actually down two percent (-2%) on an inflation-adjusted basis. 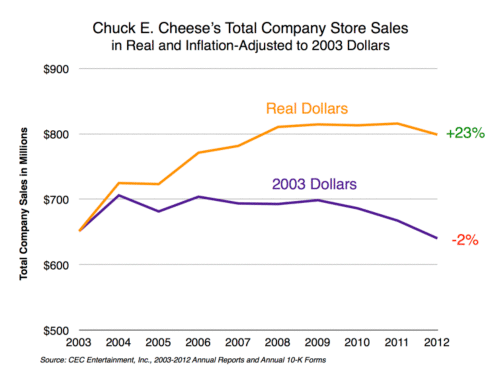 Over the 10 years, the number of company stores has increased by 23%, the same rate that total store sales have increased. So it is the increase in the number of stores that is responsible for total revenue growth in real dollars. 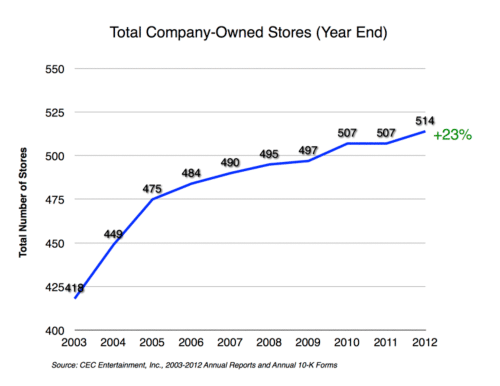 The other reason the stock is probably performing well is that the company is buying back shares of its stock, so the number of outstanding shares has decreased by 56% since 2003, resulting in a multiplier effect on earnings per share. 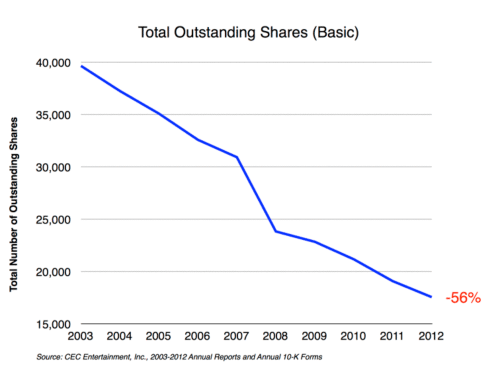 When we dig into the data further and analyze individual company store sales, the story gets rather ugly.

Average sales at company stores have declined by four percent (-4%) between 2003 and 2012 (see footnotes for explanation of average store calculations). When adjusted for inflation they are down 23 percent (-23%). As the graph below shows, this is a long-term trend, not something brought on by the Great Recession, although that is most likely a contributing factor in recent years. 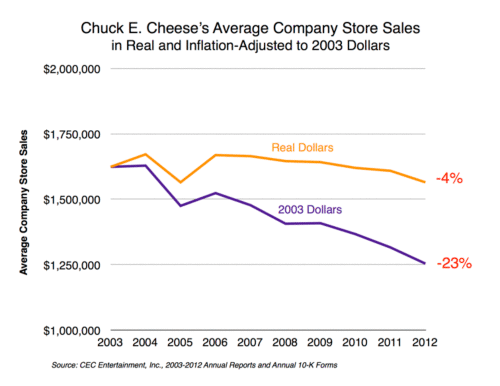 This is what the change to comparable company store sales looks like when adjusted. The only year with a real dollar increase was 2004. 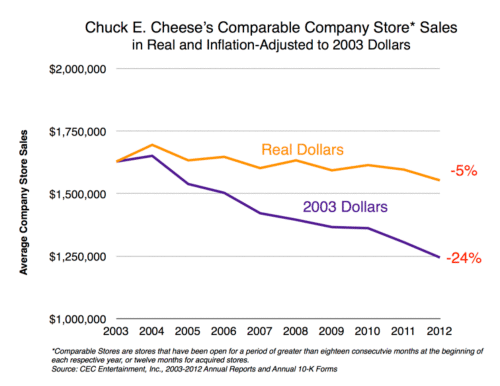 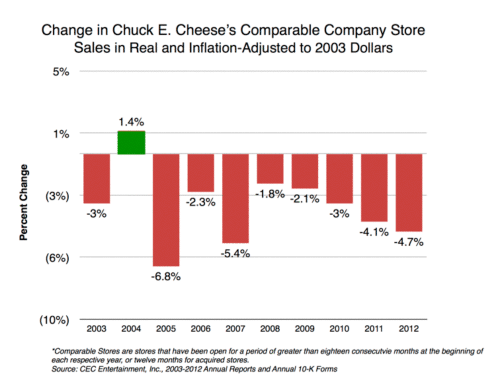 When we looked at the profitability of stores (including allocation of expense at the corporate level which were 6.7% of revenues in 2012), things really look bad. Average annual income before taxes for company owned stores declined by fifty-three percent (-53%) on a real dollar basis and by sixty-two percent (-62%) when adjusted for inflation. 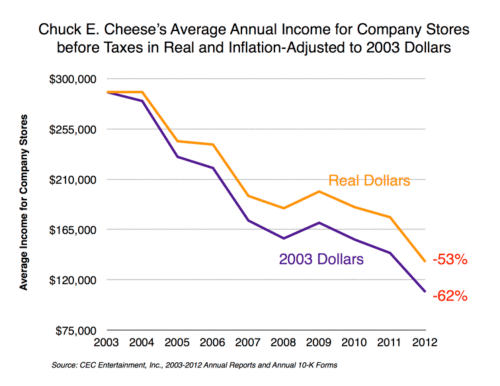 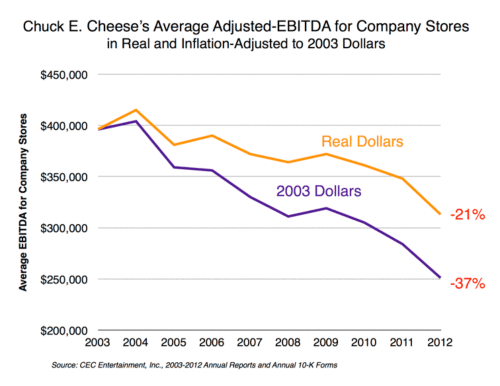 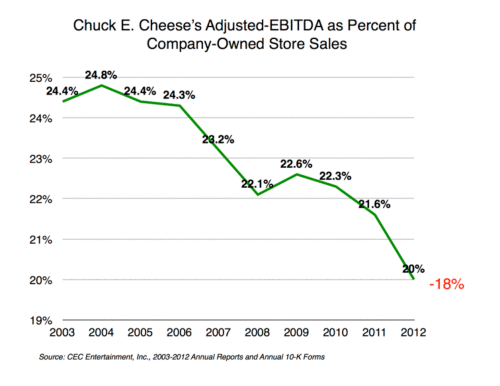 Individual company store sales have changed significantly in the proportion of food & beverage sales compared to entertainment and merchandise sales. Average store F&B sales have declined by thirty-two percent (-32%) and -46% when adjusted for inflation whereas entertainment and merchandise sales have increased by 54% or only 23% when inflation-adjusted, not enough to offset the decline in F&B sales. 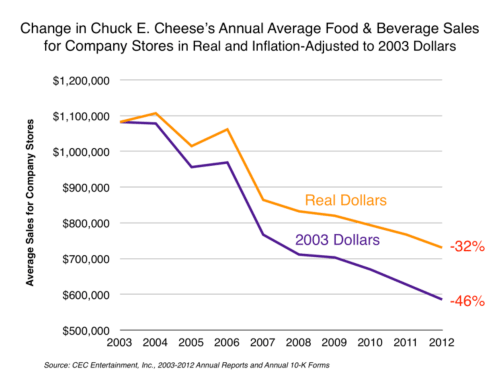 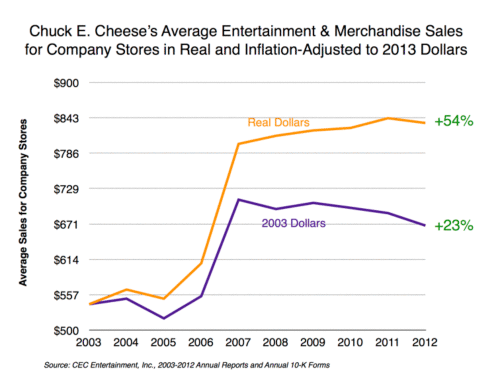 F&B sales have declined from two-thirds (67%) of all sales to less then half (47%) while entertainment and merchandise sales have increased from one-third (33%) to over one-half (53%) of sales. Here’s a graphic representation of the changes from 2003 to 2012 in both real and inflation-adjusted dollars. 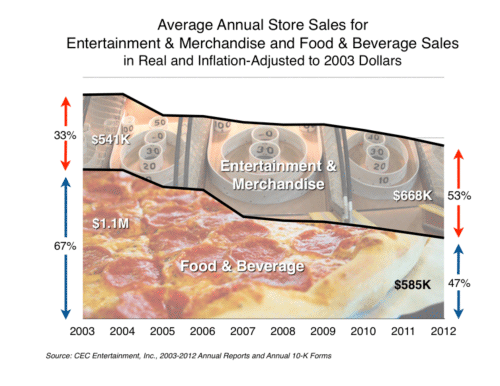 We also looked at changes to labor costs and the cost of goods sold (COGS). Labor costs have remained steady as a percent of sales. The COGS for F&B has rising by over 1/3 (+36%) from 18% to 25% of F&B sales. The COGS for entertainment (basically redemption games) and merchandise has decreased by almost one-half (-47%) from 13% to 7% of such sales. 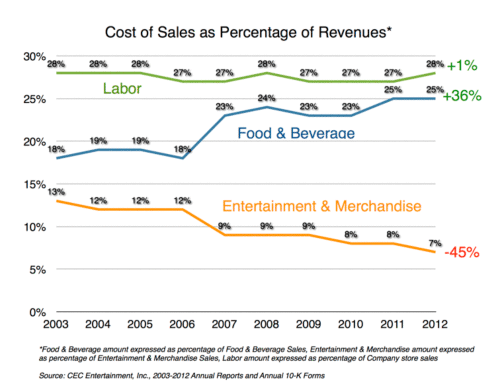 So, at a corporate level or if you are an owner of CEC Entertainment stock, things have not been great, but not all that bad over the past ten years. But when you drill down to look at individual store performance, things got rather ugly:

What does all this tell us? First, it is important to understand that CEC is a professional, well-managed company. They have a top team of executives at the corporate level. As a large company with over $800 million in revenues and 514 company operated stores, they can mine, analyze and use store level data to fine-tune and improve performance. They have the ability to test and tweak new equipment, programs and marketing at a few stores to assure they have positive results before rolling them out company wide. They can analyze individual store performance compared to its trade area demographics to fine-tune their selection of new store locations. They have enormous buying power with the game, furniture, kitchen equipment, other equipment and food and beverage suppliers they buy from. They have many advantages that individually-owned children’s entertainment centers do not. We do not believe you can attribute the downward individual store performance solely to management. There are also other forces at work.

These are some factors that we believe may be influencing CEC’s declining performance trend (in no particular order):

Secondly, that food and beverage is a very important part of the success formula as it is a significant contributor to profitability. The numbers clearly show that CEC’s per store sales and profitability decline is attributable to their declining F&B sales.
Without F&B sales, CEC stores would currently be operating at a loss (average 2012 store F&B sales of $730,000 minus 25% COGS and 28% labor means a $343,000 contribution to per store income before taxes, which is currently only $136,000 per store).

So if you are in the business of operating a children’s entertainment center, a family entertainment center, a bowling center or any other type of location-based entertainment venue (LBE), don’t lose sight of the importance of food and beverage. You don’t want to fall behind the curve for quality and healthfulness of the food you serve compared to what is happening in the overall restaurant industry, as that is what forms consumers’ expectations for the F&B you offer. And when you fall behind the curve, your sales will decline. Our industry research indicates that not only will you experience a decline in per capita F&B sales, but also a decline in over all attendance, as quality F&B is a significant part of the formula for the attractiveness of any LBE.