It is important to identify and understand trends, especially long-term ones. Trends can be detected by examining past and present events. They of course also affect the future. That is why we need to understand them. If you plan a location-based entertainment center (LBE) only based on conditions that exist today and fail to take into consideration the impact trends will have on it in the future, what works today just might not work in a few years.

We have been tracking and analyzing changes throughout the location-based entertainment industry for years, including the FEC and bowling segments, as we believe in practicing evidence-based consulting and design for our clients; making decisions based on proven evidence rather than mere opinion or speculation. We have shared many of our findings, including many long-term trends we have identified, in articles in this Leisure eNewsletter as well as LBE industry publications.

The most basic overall LBE industry trend we have identified is decreasing participation; less people attending and attending less often. Furthermore, what is called social stratification is occurring with both participation and spending increasingly shifting to higher socioeconomic households. Affluent households, those with $100,000+ incomes, are growing in the majority percentage of all LBE attendance and spending they represent. Overall average household spending at LBEs is on the decrease, with the greatest decreases occurring with lower socioeconomic households and at entertainment venues during trips away from home. All these trends are long-term and started way before the Great Recession. The recession only accelerated them.

The most popular form of indoor social entertainment has and continues to be bowling. Technically bowling is both recreation and a sport. However, when we think of going out to have a good time with family or friends, we really consider bowling a form of participatory entertainment and socialization, using the term entertainment in its broadest sense.

Our company has access to over a decade of research data from four independent U.S. National surveys that track bowling participation. All four surveys are based on National samples of 40,000 or more households. Based upon the consistency of each survey from year to year, trends can reliably be identified from the data.

Although there are small differences in the results from each survey for each year, when we look at the longitudinal data that each shows the trends we found are very consistent.

We’ll share with you some long-term bowling trends we have identified. We’re going to use data from 2007 through 2011. However, when we look at years prior 2007, we found the same trends in play, some going back several decades. They are all long-term trends. 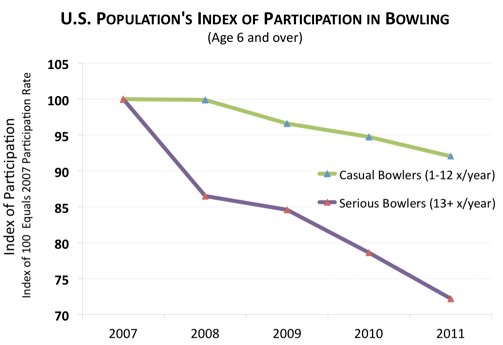 Since 2007, casual bowlers have grown from 74% of all bowlers to 79%. Serious bowlers are now only one-fifth (21%) of all bowlers. That is in sharp contrast to the Golden Age of bowling between the 1960s and early 1980s when approximately 75% of all bowlers were competitive league bowlers. 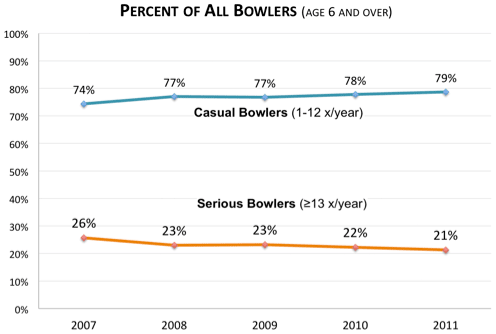 Who currently bowls can be the opportunity

So who currently bowls? When we look at age groups, we find the largest number of bowlers in the 25 to 34 age group and the second highest the 35-44 age group. 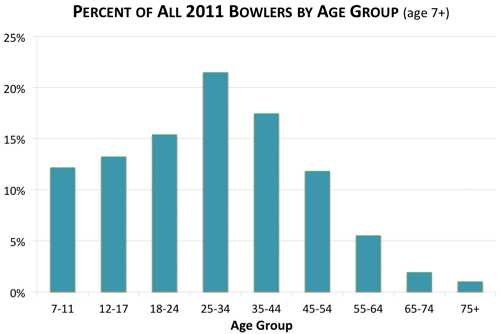 When we look at socioeconomics and household income, the largest number of bowlers, both casual and serious, is found in higher socioeconomic households. 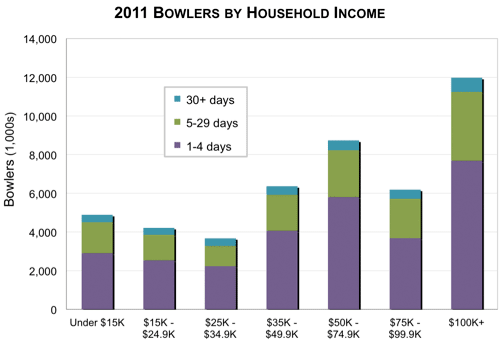 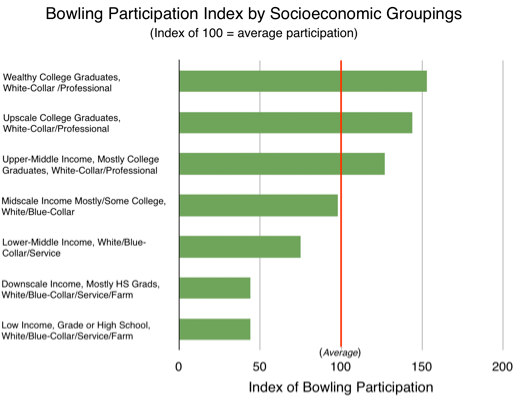 This is in contrast to the heydays of league bowling when the predominant bowler was blue-collar.

Now for the good news

At a macro level, the declining trend in bowling participation does not bode well for the bowling industry. However, the data and our observations of bowling facilities throughout the country show that there is a niche opportunity for success despite all the negative trends. The recipe for success is a combination of casual bowling, upscaling, food and beverage, hybridization, targeting adults and elastic demand. We’ll discuss them one at a time.

Upscaling
Higher socioeconomic households have the highest participation rates in bowling and are growing as the percentage of all bowlers. Two-thirds of all households that bowl are currently upper-middle income and higher and mostly college-educated. Their tastes for décor and ambiance, food and beverage, and customer service are at a much higher standard than most existing bowling centers. This mismatch of the modern discriminating casual bowlers with the facility, operations and experience at older bowling alleys that continue to age is a major contributing factor in the decline of casual bowlers.

Food & Beverage
Food and beverage drives frequency of visits far more then entertainment. Today time-pressed consumers are looking for one-stop leisure and dining options. Upscale bowling centers that have what we refer to as destination dining, restaurants that have the reputation of being a place you would want to visit even if you don’t bowl, are successful. Upscale bowling lounges that offer a lounge and bar experience that is a destination even if you don’t want to bowl are successful.

Hybridization
Facilities that combine other entertainment such as laser tag and gamerooms increase their appeal over a bowling-only center.

Target Adults
Community-based LBEs that target the family are far less successful than those that target adults. Family-oriented LBEs operate for shorter hours and generate lower per capita expenditures, lower sales per square foot and lower profits. Adult-focused LBEs, including bowling centers, are much more successful, especially due to alcohol sales and the ability to attract adult and corporate parties and groups. When you design for adults, you still get the families with kids during the daytime and early evening.

Elastic Demand
Higher socioeconomic households that account for the lion’s share of all LBE spending including bowling (almost half of all community-based LBE spending comes from affluent $100,000+ income households), will only visit bowling centers that match their standards for an upscale experience. Their demand is elastic. If there are no convenient upscale bowling centers near them, they don’t go bowling. If there are ones for them to visit, they do go bowling.

Our company recently conducted a market feasibility study in the suburbs of a major New England city for conversion of a vacant building to a new bowling center. We identified and visited the nine existing bowling alleys that might be considered competition in or immediately adjoining the market area. We were not surprised by what we found. Eight were old bowling alleys on their last legs, still chasing after leagues, and one was a remodeled bowling alley, but with no basic changes other than new carpet, paint and furniture. It still looked like an old style bowling alley. We gave it a C minus rating. 54% of the market area’s households were upscale upper-middle and higher income. They basically had no place to go bowling, at least not a place they would want to visit. Develop an upscale modern bowling center in that market and it will thrive, as it will have no competition for its targeted upscale market.

This situation is not unusual. During the past few years, we have conducted market feasibility studies for over a dozen new upscale bowling centers. And only in one situation was there an existing center worthy of being called competition.

That is the good news. Despite the long-term declining trend for bowling, there is a large upscale customer base sitting on the sidelines just waiting for a bowling center they will want to visit and spend their leisure time and disposable income at. The opportunity is to match the bowling facility and experience to the upscale household market. That is what elastic demand is all about. Build what appeals to them and they will come.