The experience economy has arrived, but not as expected

Joe Pine and James Gilmore first described the emergence of the experience economy in their 1999 book of the same name. Now, 23 years later, there can be little doubt that the experience economy not only exists, but also has become the new frontier for many consumer businesses. Just about every location-based retail business is trying to transform itself from offering just goods or services to also offering experiences to attract customers.

In the 1999 edition of their book, The Experience Economy, Pine and Gilmore described experiences taking place in the real world. Since then, a lot has changed with the rapid emergence and adoption of the Triple Digital Revolution - the web, mobile devices, and social media. In the second edition of their book published in 2011, the authors wrote, "Finally, digital experiences increasingly flourish, using the World Wide Web and other electronic platforms to create new virtual and gaming experiences... bits-based experiences certainly offer capabilities unimaginable in the world of atoms."

But even back in 2011, it was probably impossible to foresee how the digital revolution would evolve and rapidly grow. Today, it is disrupting and transforming every facet of society, business, and how we work, play, and live our lives. And now we have the emerging metaverse on the horizon that will offer an immersive new world to have experiences in.

For over 32 years, our company has been designing and producing leisure and entertainment experience destinations. These types of venues were a part of the experience economy even before it was identified as such by Pine and Gilmore. As part of our work, we continually research trends of how consumers spend their discretionary time and dollars to ensure we produce projects for our clients that will be successful long-term. Our research has uncovered a significant trend; there has been a substantial shift in spending to digital experiences.

By analyzing household spending, we have found strong evidence of a shift away from spending on goods, or what we refer to as stuff. Over the 23 years between 1996 and 2019, the percent of annual household expenditures spent on stuff* is down by almost one-fifth (-19%) from 13.7% to 11.4% of all spending. In terms of inflation-adjusted dollars spent, average household spending on stuff has declined by one-fourteenth (-7%).

We analyzed spending data on two different types of experiences: 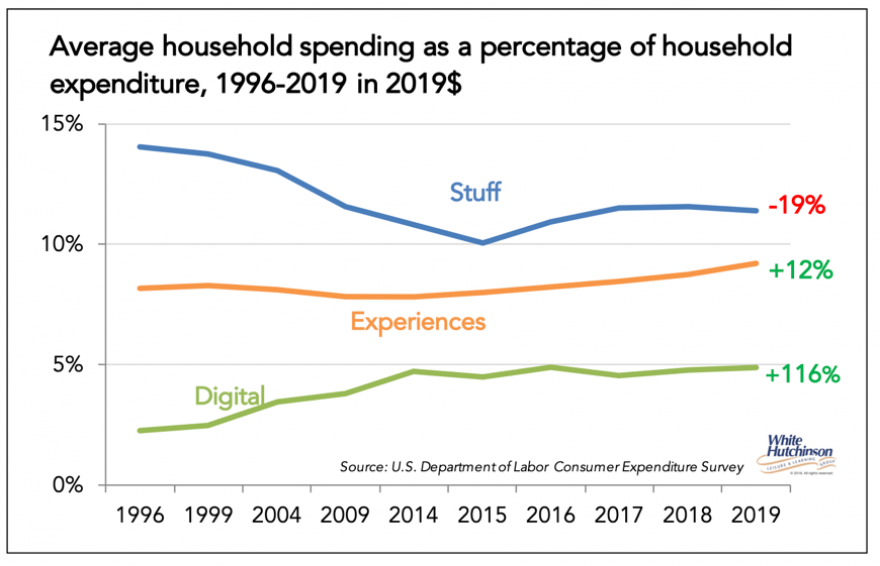 Combined, real-world and digital experiences accounted for a larger share of average household spending in 2019 than on stuff - 13.7% compared to 11.4%. 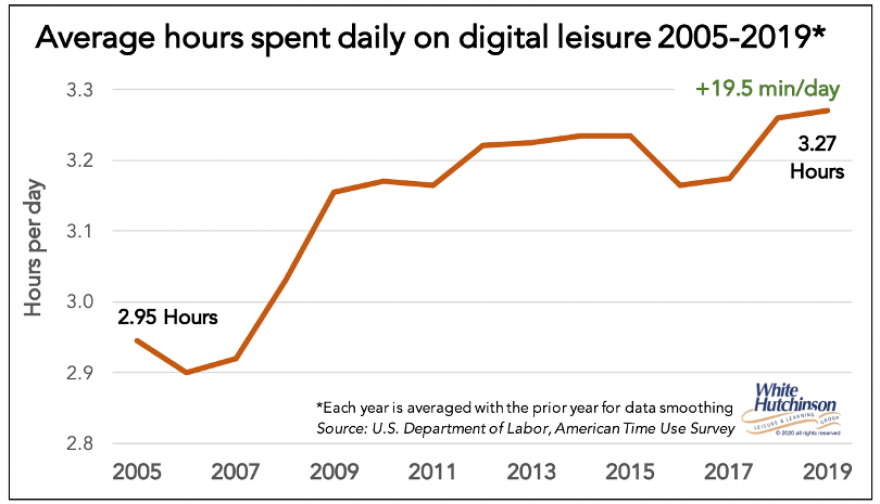 For some time going forward, while we transition out of the pandemic, we are likely to see a significant increase in real-world entertainment attendance and spending. After two years of being physically apart, people are craving in-person interaction. People have missed the social aspect of being in-person since the start of the pandemic, an experience many entertainment venues offer. Seven in ten people (71%) report getting better at prioritizing what is important to them because of the pandemic. One of the things the pandemic made more apparent is that what gives life meaning isn't stuff but shared experiences with family, loved ones, colleagues, and even strangers.

Consumers also value their time more highly than they used to. They want goods (stuff) and services to be commodities - bought at the lowest possible price and greatest possible convenience - time well saved - so they can spend their hard-earned money and especially their harder-earned discretionary time on experiences they value more highly as time well spent. 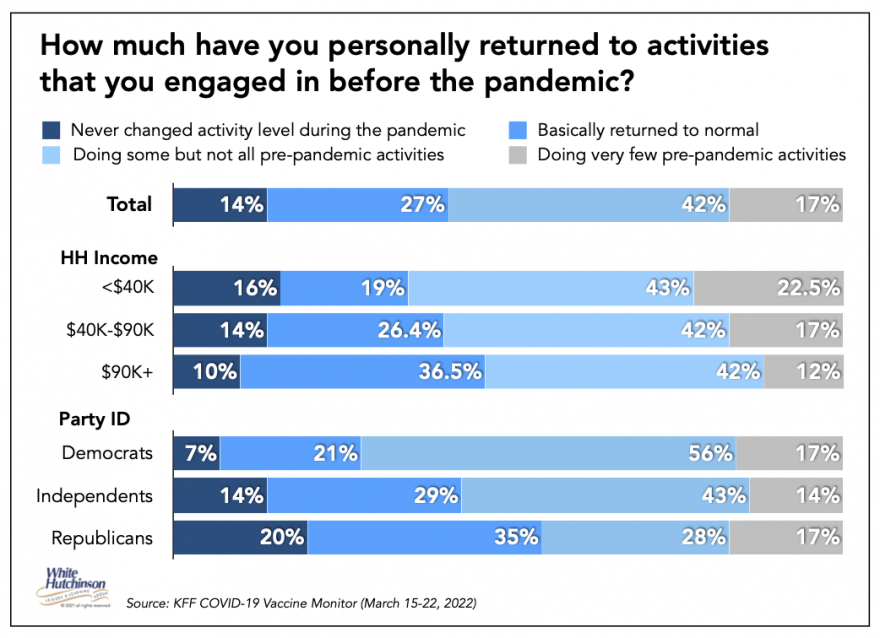 We're seeing what you might call "revenge" participation in out-of-home entertainment as people look to make up for lost time. Having missed in-person socialization for so long, those people feeling safe out in public are splurging on entertainment experiences. Many types of venues are seeing record attendance and revenues. However, a large share of U.S. adults, around four in ten, report they still don't feel comfortable doing entertainment activities such as going to the cinema, an amusement park, a theater performance, or a concert. 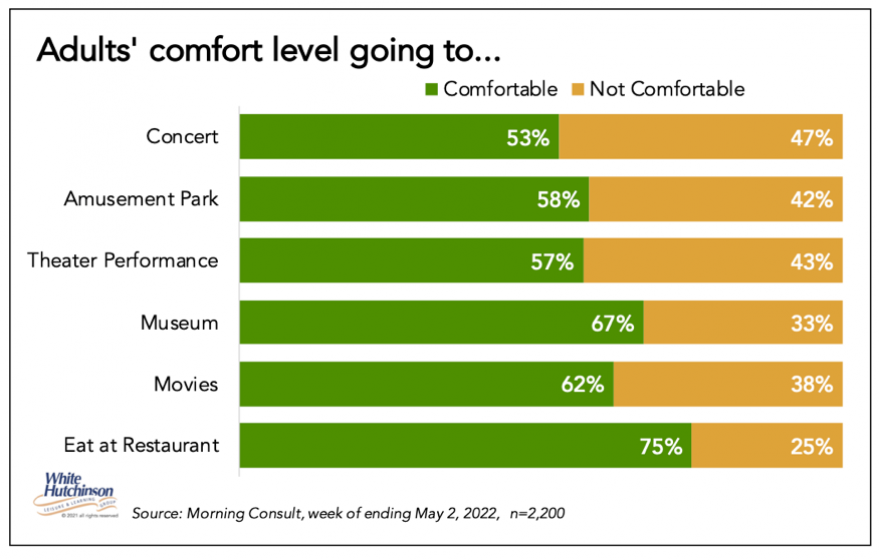 Morning Consult has suggested that some level of COVID caution is simply here to stay for roughly one-fifth of U.S. adults who will remain cautious about being in public no matter the state of variants, cases, and vaccines. This is a crucial consumer segment that out-of-home venues should be thinking about in their plans going forwards - as this may be a permanent new normal.

The possibility that 20% of the population will remain permanently cautious is not unreasonable based on the share of the population who are at high risk of becoming seriously ill or dying from Covid-19. The CDC says that anyone over age 65 or with underlying medical conditions including chronic lung disease, moderate or severe asthma, serious heart conditions, immunocompromised, severely obese, chronic kidney disease undergoing dialysis, or liver disease are at high risk. Surprisingly, the at-risk population is very large. 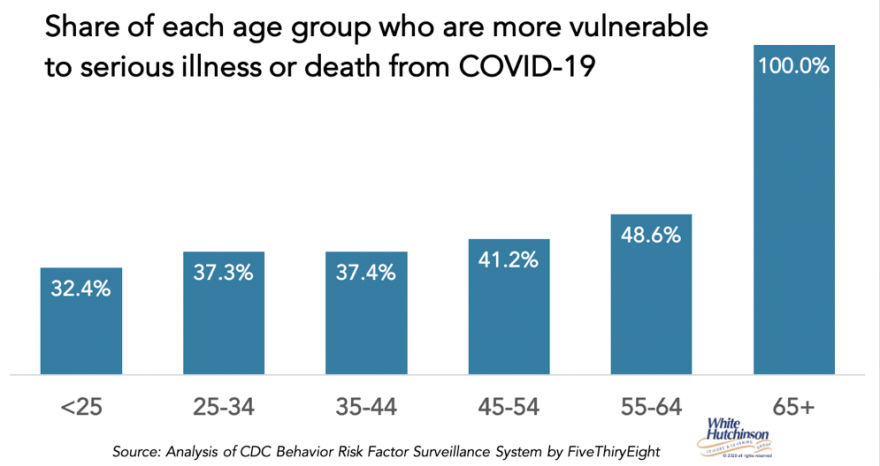 For the prime target market for many FECs and LBEs, the 25-44 age group, over one-third are at risk (37%). That entire household age group represents 40% of all spending on out-of-home entertainment and arts. The at-risk 37% account for 15% of all spending on out-of-home entertainment and arts. Even if only one-third of that at-risk age group remain cautious about visiting public places, especially indoor ones or venues with large crowds, that would mean a loss of 5% of the prepandemic market share. That 5% doesn't include that at-risk share of other age groups that might also stay away long term. 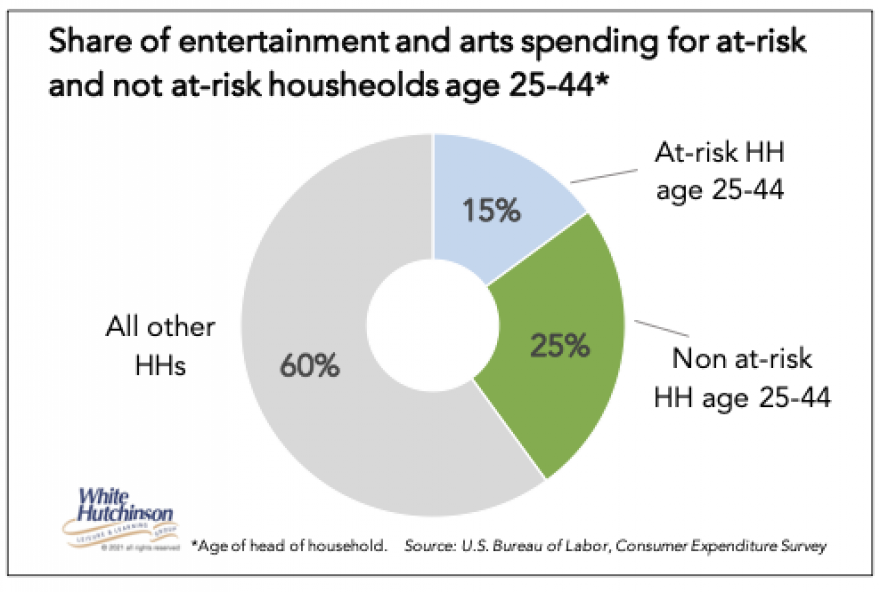 We believe one thing is for sure, the prepandemic normal will not be the post-pandemic new normal. Many pandemic habits will remain to some degree for many people. Covid-19 has changed the world and people permanently.