It wasn't all that many years ago back in 1995 when amazon.com first emerged and traditional bricks-and-mortar retailers paid it no heed. Originally, amazon.com only sold books, but then expanded into other products. First their ecommerce brought on a major disruption to bookstores. Now, with ecommerce hitting what might be called its tipping point at 13% of all traditional retail and climbing, traditional retailers are scrambling to figure out how to survive in their bricks-and-mortar stores.

Well, the same eDisruption is underway with out-of-home leisure. Few if any community-based leisure and entertainment venues understand the growing disruptive impact that we call eLeisure is already having and will increasingly have on their businesses in the future. People are spending more time and an increasing amount of their discretionary spending both socializing and being entertained via their digital screens - computers, smartphones, tablets and fast emerging VR & AR headsets/googles. This not only includes Digital Natives, the generation born during the age of the Internet, but also older consumers who have become Digital Immigrants. These digitally literate consumers live and think digitally. They expect the new. They don't see digital leisure activities as any different than real world active leisure. In fact, often the two are combined at the some time.

There are three basic ways to examine the growth of eLeisure - changes to how people spend their leisure time, changes in participation rates for different activities, and changes to their spending for out-of-home leisure versus spending for their digital screens and services.

Time
First we'll look at changes in how much time people spent on out-of-home (OOH) real world leisure experiences versus eLeisure “screen time” over the past ten years. Our analysis of data from the American Time Use Survey reveals that time spent on eLeisure is growing while time spent of OOH leisure is declining. 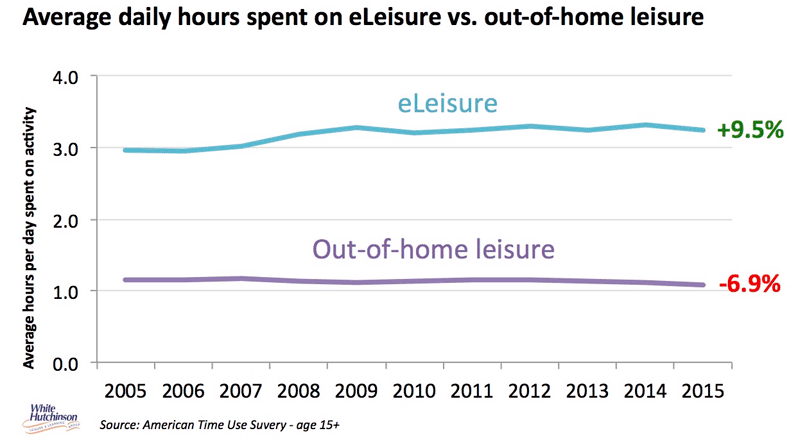 Participation
The graph that follows shows changes to the percentage of people age 15 and older participating in particular activities as their primary activity on a typical day. 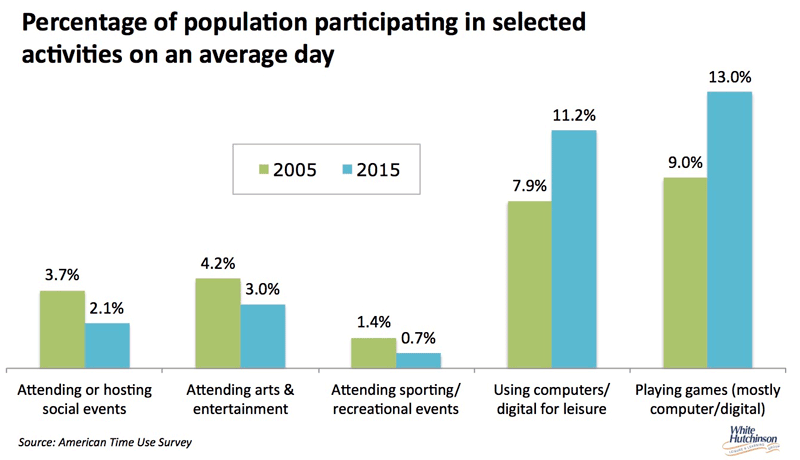 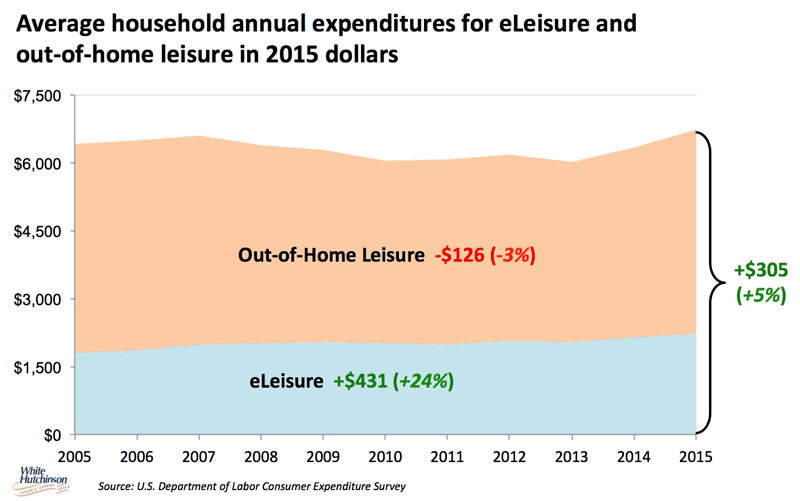 While the average household has increased its leisure spending by 5% (+$305). The increase is all due to a one-quarter increase to eLeisure spending (+24%, +$431), while spending on out-of-home leisure has actually declined.

Today compared to the past, people are venturing out less often from their homes. In fact, futurist Faith Popcorn says there is now a new lifestyle trend of people Bunkering, seeking safety and escape from reality by retreating to the seclusion of their homes, a more intensive staying at home trend than the cocooning trend she previously identified. The New York Times recently ran a story titled, Is Staying In the New Going Out? Last year there was a blog on the Huffington Post, Staying in Is the New Going Out: Forget FOMO, which discussed JOMO, the joy of missing out and just staying home. Another acronym has emerged, JOSH, the joy of staying home. In fact, a June 2016 Ypulse survey found that almost 3 out of 4 millennials and teenagers would rather stay in on the weekends than go out at night (72%). Among 21-24 year olds, it was even higher at 79%. Many teens and young adults are more than happy to live in the binge-watching Netflix-and-chill zone at home than venture out. In fact binge-watching has become a very social group activity for many millennials. A good night is fast becoming more about couch time than going out on the town. Welcome to Generation Homebody. (Streaming of Netflix shows, a technology that didn't exist a decade ago, now accounts for 25% of peak internet traffic in American homes.)

eLeisure's eDisruption is already here and it's not going away, it has only just begun. Location-based entertainment centers need to avoid sticking their heads in the sand like bookstores and other retailers did as amazon.com emerged and grew. Instead they need to start reinventing themselves to be relevant to consumers, both now and in the future.

Additional reading in this eNewsletter: