Beer pong, also known as Beirut, is a drinking game in which players throw a ping-pong ball across a table with the intent of landing the ball in a cup of beer on the other end. The game, which has existed as early as the 1930s, is believed to have originated in the U.S. with Army Air Corps at Fort Bragg. The original version resembled an actual ping-pong game with a net and one or more cups of beer on each side of the table. The goal was to score points, or sink the ball in the opponent's cup, or knock the cup over.

Today beer pong typically consists of two teams of two players each with 6 or 10 cups set up in a triangle formation on each side. Each team then takes turns attempting to shoot ping-pong balls into the opponent's cups. If a ball lands in a cup, the contents of that cup are consumed by the other team and the cup is removed from the table. The first team to eliminate all of the opponent's cups is the winner.

Beer pong tournaments are held in the United States at the local, regional, and national levels. The World Series of Beer Pong (WSOBP), hosted by bpong.com and held each year in Las Vegas, is the largest beer pong tournament in the world.

Beer pong has hit colorful new heights with inventor and entrepreneur Mark Always's creation of Penumbra Tables that provide more interactive, fun spaces in bars and clubs. High-tech Penumbra Tables are equipped with LED lights and have the ability to make the ping-pong balls hover. For the Penumbra Tables cup sensors, a microprocessor takes readings hundreds of times per second and then lights up around the cups that are on the table. The sensors also make the lights illuminate to show all possible re-racks throughout the game.

When each ball is not in use, it hovers above the table on either end with the help of high-speed fans and a custom-designed LED lit funnel. Eight emitters and two sensors in each funnel work to sense the ball as it hovers over the table. The air streams come on when a ball or hand is placed over the funnel. 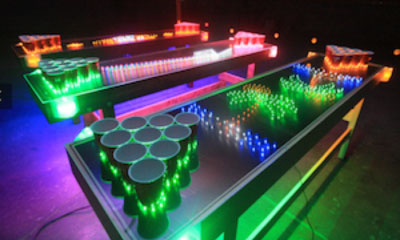 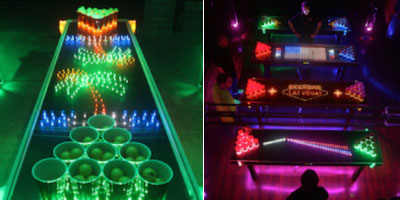 Some Penumbra Tables are WiFi-enabled. Those tables can send the real-time score of a beer pong game to central servers, and keep score on a worldwide leaderboard. The tables with WiFi also send notifications to wandering players to return to a table when it's their turn.

The tables don't necessarily have to be used to encourage beer drinking. They can be just as much fun when the cups are filled with non-alcoholic beverages.