Cultural changes to leisure time and its impact on LBEs

Compliments of the U.S. Bureau of Labor Statistics' American Time Use Survey that has been conducted since 2003, we are able to track over time how, where and with whom people spend their time as well as how many people engage in particular activities. The 2013 time use data was just released. We analyzed unpublished data from the survey to examine long-term trends for different types of leisure activities. Here's some of what we found. WARNING, it isn't good news for the location-based entertainment industry.

Although peoples' overall leisure time is little changed over the years - it averages five hours per day plus or minus a few minutes each year - how they allocate that time is undergoing some significant changes. We examined changes in:

The average time is down for all three. However, averages rarely give you the full picture. So we dug deeper to look at the percent of the population that was participating in the three activities on an average day, and for those participants, how much time they were spending. Here are the results: 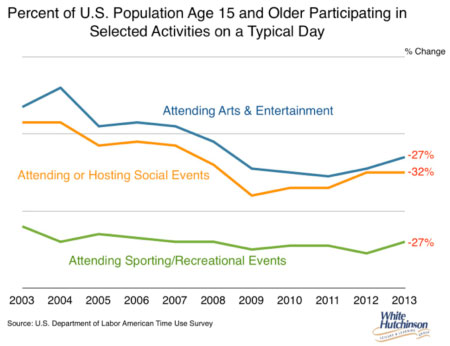 Since 2003, the percent of the population:

Simply put, on an average day in 2013, more than one-quarter less of the population is participating in these activities than in 2003. More than one-quarter is a significant lose of market share, i.e., attendance. And what is eye opening is that although all three activities took a dip during the recent recession, this appears to be long-term trend that started back around 2004.

When we look at how much time the participants did spent, it is up compared to 2003. Less people are participating, but those that do are spending more time. 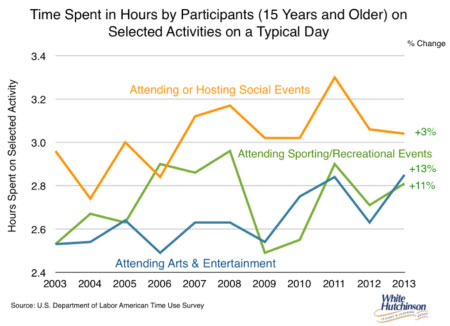 We have little doubt the above analysis is true based on our other analysis of the data from the Consumer Expenditure Survey for both spending and participation, industry surveys and other research on digital behaviors, much of which we have reported on in past articles in this eNewsletter and our CEO has reported in his blog, that the digital world with all its social media and entertainment options is taking leisure time share away from attending real world leisure venues as well as attending or hosting real world social events. Our leisure time is clearly migrating into the virtual world. The location-based entertainment and leisure industry is truly experiencing Digital Disruption.

And as we have been reporting in our articles and Randy's blog, the only way to really compete today with the Convenience of the digital world for those consumers who have disposable income they could spend on attending entertainment venues, is to offer High Fidelity experiences. And that doesn't mean competing on price, but rather offering premium experiences that have perceived value to match their premium prices.