The disruption of convenient, cheap and easy

In one of Seth Godin’s daily blogs (we recommend following it), he pointed out the mistake that many companies have made by mistaking higher quality for what customers really want.

The first example he used was Kodak, which had close to a monopoly on film for generations. They thought that what would ensure their future was higher quality film, so that is the path they followed, producing films with all the quality that any professional photographer could hope for.

Meanwhile, Polaroid came out with a disruptive technology and pursued the same goal – higher quality. As they did, the raised their prices to support the cost of the cameras and film they manufactured to compete with Kodak.

We all know the result. It ends up that what the mass market really wanted was not higher quality film, but rather the ability to take and share unlimited quantities of photos at exceedingly little cost. The ‘quality’ that most consumers really wanted was convenient, cheap and easy, not professional quality.

We have seen the same thing with music. It went from the LP phonograph record to the CD with its higher quality, only to be disrupted by convenient, cheap and easy MP3 music, which is actually much lower quality in music fidelity.

We are seeing the same disruption underway with films. As cinemas ramp up the quality of viewing movies, both the quality of the film on the screen, the sound and the overall viewing experience, people are increasingly watching movies at home with convenient, cheap and easy Netflix and other streaming services. Furthermore, movie viewing is slowing migrating over to mobile devices, accessible 24/7 from wherever you are.

A recent survey analysis by Flurry demonstrates how convenient, cheap and easy smartphone apps are already competing with out-of-home entertainment venues. At the prime time to visit entertainment venues, in the evening and early night (6pm – 10pm), the use of smartphone iOS apps is at its peak, with the majority of time being spent playing games, on social networks and photo sharing. Why leave the home to spend time going somewhere and then spending money when you are there when you have convenient, cheap and easy in the palm of your hands while you sit in your comfy arm chair sipping a cold soda or beer? 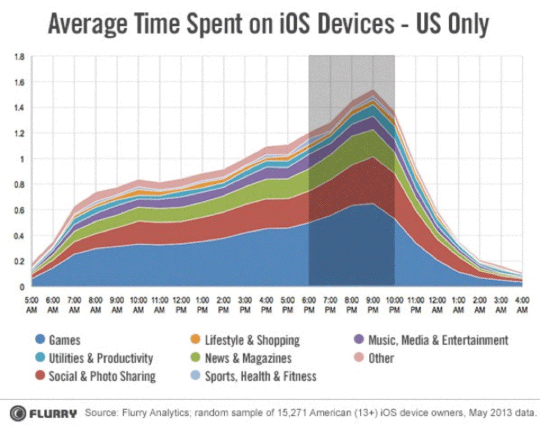 Our company’s research and analysis of changes to Americans’ time use and spending indicates that just such a convenient, cheap and easy disruption is underway. Some of this can be attributed to both the Great Recession and the economic squeeze the middle-class has been experiencing for a number of years – cheap trumps more expensive entertainment alternatives when you are short on disposable dollars. But our research shows that the migration to digital entertainment actually started over a decade ago, just as the Internet and digital entertainment were taking off in popularity and gained momentum when the smartphone emerged in in 2007.

It is obvious that LBEs can’t compete the way digital photography, MP3 music or consumer digital films did by becoming convenient, cheap and easy. That would be financial suicide for a venue that is expensive to develop. What our company believes is the only real long-term viable strategy for LBEs and FECs is to no longer market themselves as entertainment venues. As long as they are considered entertainment venues they will have to compete with the convenient, cheap and easy digital competition that is continuing to gain the pure entertainment market share with the increasing connected consumer and the growing sophistication of digital and virtual offerings. Instead the answer is to reinvent and transform the location-based offering to an experience that the digital world can’t offer, an experience for which there is no convenient, cheap and easy alternative.

It’s all about reinventing LBEs and FECs to become OHDDEESEs – out-of-home dining-drinking-entertainment enhanced social experiences. Yes, social media offers a convenient, cheap and easy digital social experience. Yes, some digital entertainment includes a social component. But the Internet does not offer a food and beverage alternative (at least not until they invent Star Trek’s food replicator). Yes, you can drool over the Instagram photos of restaurant meals, but that only makes you want to leave your home and eat one. Food and beverage is a powerful out-of-home draw. The smart cinema chains have figured this out. That is why they are repositioning themselves as a social destination with in-theatre dining and alcohol, restaurants, bars and lounges. Some bowling-based venues have done the same where the bowling really is secondary to the food, drink and socialization.

In an aesthetically pleasing environment where the staff are true hosts and make you feel important, great food and beverage and great group entertainment facilitates and enhances a real world social experience. That is something worth leaving your home for. That is not an experience that can be found in the convenient, cheap and easy virtual or digital world. That is a quality experience that has no alternative or competition that can be convenient, cheap and easy. That is something that offers great value people are willing to pay for. That is how the LBE and FEC industries can reposition themselves to survive and prosper in the age of digital connectivity.