Designing entertainment attractions to overcome the fear of conversation

Our article last month Implications of the new 6th Sense and flight from conversation attracted a comment from Jim Kessler, the owner of the LaserTron Block Party, located in the Amherst suburb of Buffalo, NY and probably the most successful laser tag entertainment center in America. Jim made some very good observations that we think are well worth sharing. He has agreed to let us share them with you. So here are his very words on the subject:

“I don't think the 'real' problem is people looking for ways to NOT communicate directly with other people as much as it is not feeling comfortable with communicating one on one or even worse in a group.

“If a business owner told 10 employees to go to a Chamber of Commerce meeting to collect 20 business cards 9 out of 10 would prefer cleaning the employee bathroom or even being fired. Meeting new people is very scary for most people even if you already know each other a little bit. Email is safe, and texting is safer than actually dialing the number. You can't get hung up on with a text or wonder why they didn't answer the phone or why they didn't call you back...

“I went to a few business functions in Buffalo and you could easily tell who was comfortable working the room and who wasn't. You could also see that most were extremely uncomfortable working the room and others left in the first 30 minutes without talking to more than one or two people. This is why the best salespeople sell 10 times more than the average salesperson. Being socially strong is not the norm for most people, it is the abnormal person who has this skill.

“What's strange is that most people want to be around other people and I think most want to know more people, but most are very afraid to engage in one on one conversations with people they don't know - mainly because they fear being rejected by another human being or worse the entire group. Go to Starbucks or any coffee shop often enough and you will see the same person hanging out by themselves.  They are shy, but there still there hoping to make a connection, but too afraid to make the first move... 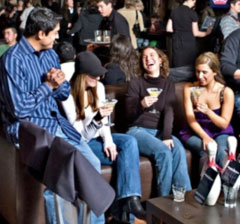 “We have to facilitate interactive experiences that break the barrier and force humans to interact with each other. I think laser tag actually helps to make this work. A group of friends decide to go out and do something different and a few friends related to people in the group end up going as well. At the end of the game, you suddenly have these strangers within the group talking rapidly to each other about something they now have in common (i.e. the laser tag game that just happened). I'm not sure we want to embrace the digital communication as much as we want to increase human interaction via our attractions and other social enhancers. The goal is to break down the barriers so humans can find a common subject to talk about that is non-threatening.

“First time meetings are a big risk. However, if we design attractions or interactions that are fun and help to eliminate that fear of not having anything in common to talk about, we have an entertainment center that will draw a lot more people. Nightclubs and bars don't really exist for couples, they exist for all the people who are trying to find a possible partner. Alcohol is the main catalyst that breaks down the communication barriers.”

Jim, thanks. That’s great advice on how to overcome what researchers have observed is happening as a result of Americans increasingly going online for leisure and using email and texting. Group physical interactive experiences at entertainment venues such as laser tag and bowling break down the barriers of conversation and fear of real world socialization. At adult venues a little alcohol lubrication doesn’t hurt either.