Over the past several years we have been providing in-depth analysis and coverage on the changing landscape of entertainment competition and its impact on location-based entertainment venues (LBEs). A number of factors are disrupting participation and spending at LBEs including the Triple Revolution—the internet, mobile devices and social media—a changing consumer culture, the Millennial generation, the Great Recession and an even longer term trend of decreasing incomes and the resulting declines in disposable income for a large segment of the population. We haven’t been trying to predict some doomsday scenario for LBEs, but rather create awareness that there are new forms of entertainment competition gaining market share and new market forces that didn’t exist several decades ago. You can’t succeed if you don’t understand the competition and how it will shape your future. In this article we examine how online leisure is resulting in a decline of time spent on other types of leisure.

We now have evidence from an October 2013 research paper by Scott Wallsten from the Technology Policy Institute that in fact, online leisure activities are displacing time with face-to-face conversations and time spent at bricks ’n’ mortar leisure experiences. However, Wallsten’s research is not the first to document that time spent using technology is replacing real world human interaction, so we’ll cover that first before getting to his research findings.

Back in 1995 Robert Putman published an essay Bowling Alone: America's Declining Social Capital, which was followed by his 2000 book, Bowling Alone: The Collapse and Revival of American Community. Putman identified a trend he called technological transformation of leisure. He found there was an increasing focus on technology (predominately television back then) and individual self-satisfaction and pleasure over group or team activities. As a result of technology, as well as other cultural changes, he documented that Americans were steadily becoming less engaged in forms of in-person social intercourse and that we, as a society, were losing our sense of social capital; we were bowling alone.

Putman’s research found that Americans spend far less time together, both formally and informally, than they had in the past; Americans didn’t talk by phone as much as they used to or even go on picnics together as often as they did before. Putnam documented a large number of activities, including participation in organized activities (civic organizations, religions, clubs, school-related activities) as well as informal social activities (dinner parties, socializing at work, card clubs, talking in neighborhood bars) where participation had significantly declined.

Putnam believed that a major reason for the deterioration in social gathering was television, with viewership time increasing and taking up most of the time that used to be used for group activities. One reason Putnam felt that television was negatively linked to social cohesion was that it provides us with a pseudo-personal connection to others, in which viewers feel engaged with community without the effect of actually being engaged. Television as a medium creates a false sense of companionship. Instead of going out to do fun things with friends, people can stay home and watch television, which has different programs to suit different tastes, as well as use the internet (in its infancy back in 1995-2000) and pursue all kinds of other interests/technologies. 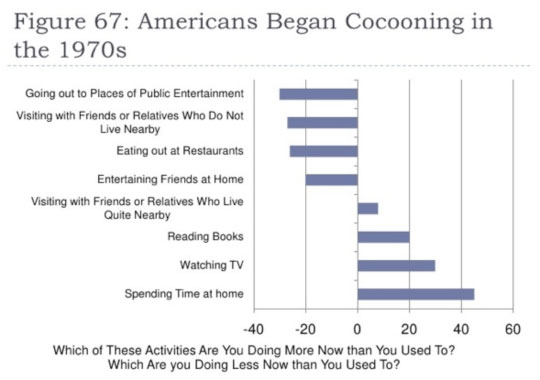 Of course 19 years ago, Putnam couldn’t have imagined the impact of new technologies and the constant connectivity that Sherry Turkle has researched and reported on. As a result Putnam’s analogy of bowling alone has now become Turkle’s alone together (See last month’s article Implications of the new 6th Sense and flight from conversation for discussion about constant connectivity and Turkle’s alone together.) But the causations and impacts are not really all that different for the decline of in-person socialization brought about by the increasing use of technology.

Scott Wallsten reported his new research in an October 2013 working paper for the National Bureau of Economic Research that is apply titled What Are We Not Doing When We’re Online. Wallsten analyzed data from the 2003-2011 American Time Use Survey (ATUS), a Census Bureau survey that has been asking U.S. citizens age 15 or older since 2003 how they spend their time. The ATUS shows that the total amount of time we spend on leisure has remained relatively constant between 2003-2011, at about five hours a day (ranging from 293 to 305 minutes). 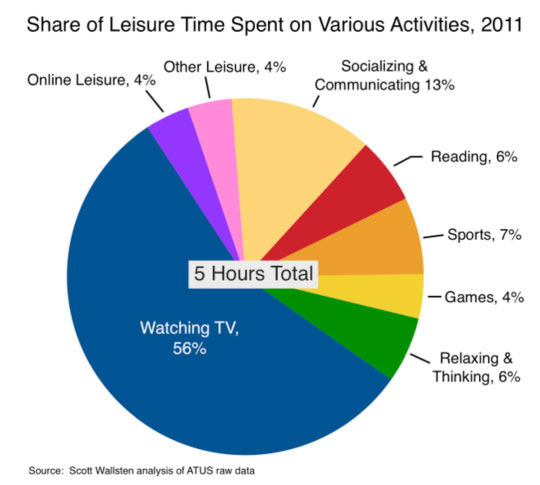 However, although the total amount of leisure time has remained basically constant, the ATUS data shows that the amount of time spent online and the share of the population engaged in online activities has been increasing steadily. It’s a zero sum game – when time on online activities increases, there is a crowding out, a decrease of time spend on other leisure activities, as well as other activities.

Wallsten measured the offline (real world) activities that are crowded out by our online leisure throughout the day. Wallsten’s analysis of online leisure included social media, browsing and instant messaging, but did not include time spent online gaming, watching videos or emailing. He had to exclude those activities from his analysis because of the way the data is collected and coded by the ATUS. His results suggest a crowding out effect of online leisure on offline leisure. He found that for every additional hour the average American spends with online leisure, they spend roughly 17 less minutes doing some other type of leisure like watching TV, going out for entertainment and socializing in more traditional ways, 16 fewer minutes working and seven fewer minutes sleeping.

Wallsten looked at those people who spend online leisure time in 2011, and they averaged 100 minutes per day, one-third of their total leisure time. What that means is those 100 minutes of online leisure crowding out, displaced, one-half hour (29 minutes) of time that would have otherwise been spent on real world leisure activities.

Research by the Pew Research Center’s Internet & American Use Project shows that: 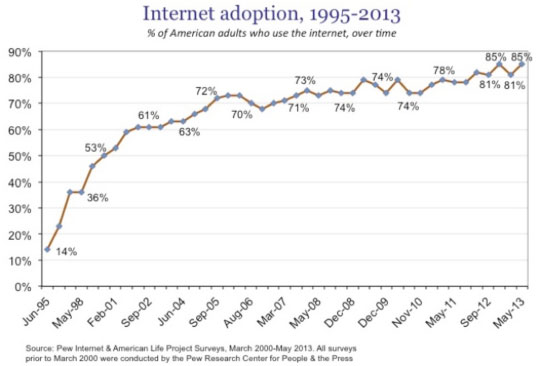 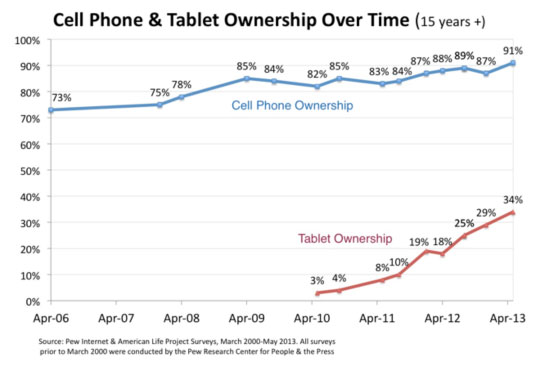 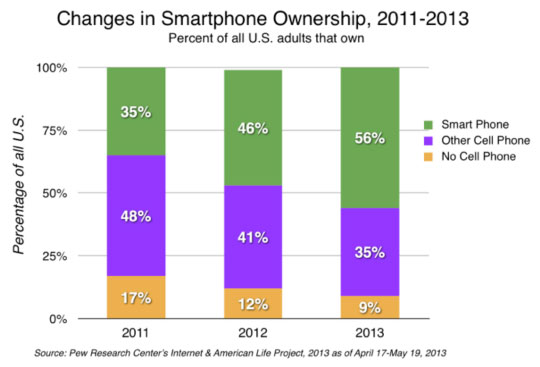 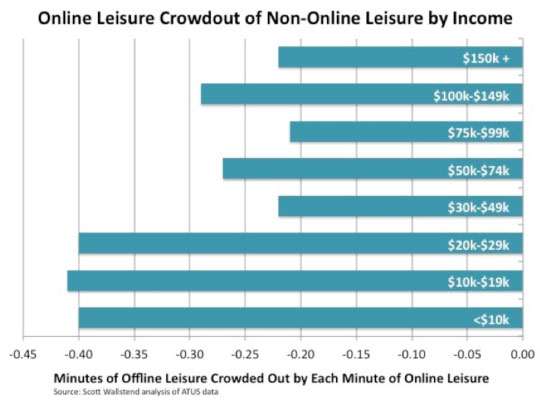 Wallsten also said, “My results also suggest that other offline leisure activities that involve interacting with other people are crowded out by online leisure: attending parties and attending cultural events and going to museums [and entertainment venues] are all negatively correlated with online leisure. In short, these results based on ATUS data suggest that a cost of online activity is less time spent with other people.” 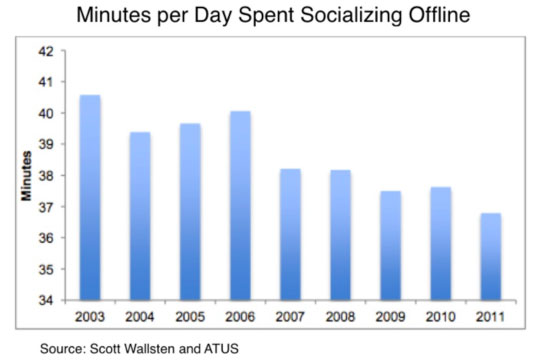 Wallsten found that “the largest amount of online leisure takes place on Saturday and Sunday, closely followed by Friday.” These are of course the peak times when people could otherwise be attending entertainment venues.

October 2013 data collected by Localytics also shows people use their mobile apps for games and entertainment the most at 9pm, the prime time when they could otherwise be out and about enjoying some location-based entertainment. 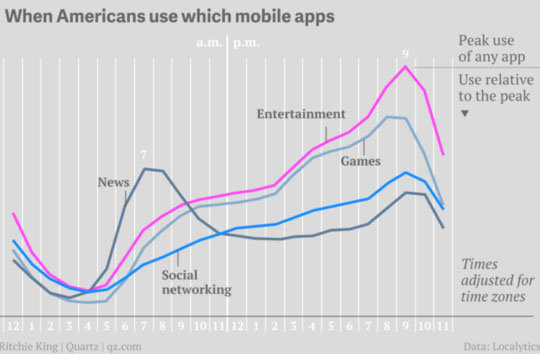 Offline leisure and interacting with other people were not the only activities that Wallsten found were crowded out by online leisure. He also found that every minute of online leisure resulted in: 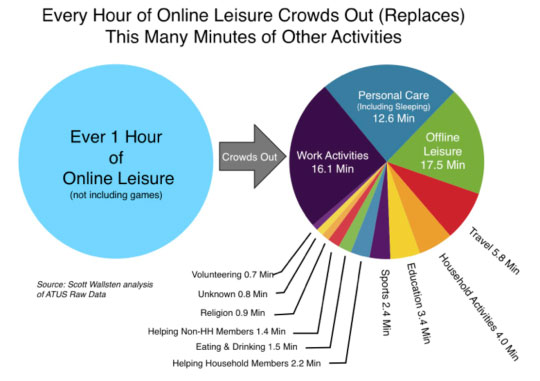 Keep in mind that Wallsten’s research study was limited to time using the internet or time spent with online leisure doing things like combing social networks, browsing for non-work purposes and instant messaging, etc. It did not examine the crowdout impact of playing games and watching video online or from email, even though they can take up a lot of leisure time. There can be little doubt that the online time spent in those additional online leisure activities is also crowding out offline leisure and activities.

If we just look at time spent playing games on mobile devices, the statistics are alarming. There are thousands of game options available on mobile devices. A May 2013 survey conducted by Harris Interactive for CouponCabin found that 51% of adult mobile device owners use them to play games. 32% played games at least once a day. Early this year Flurry Analytics found that smartphone and tablet users spent an average of 50 minutes a day playing games on their devices, the same amount of time they spend on social networks and other online entertainment combined. 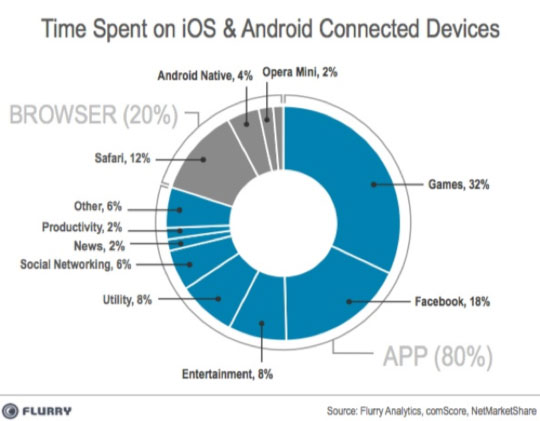 The ATUS shows that on average, Americans spend the same amount of time playing games (online, game consoles and board games) as they do with online leisure. 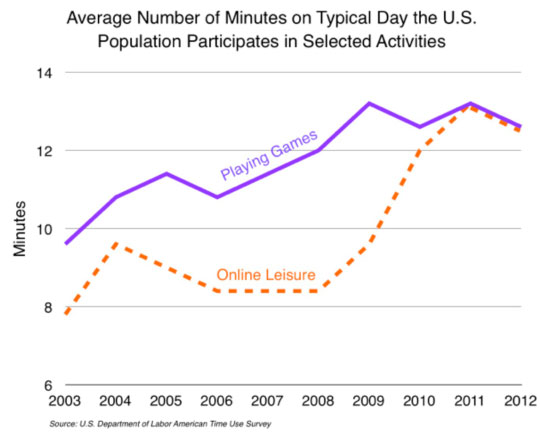 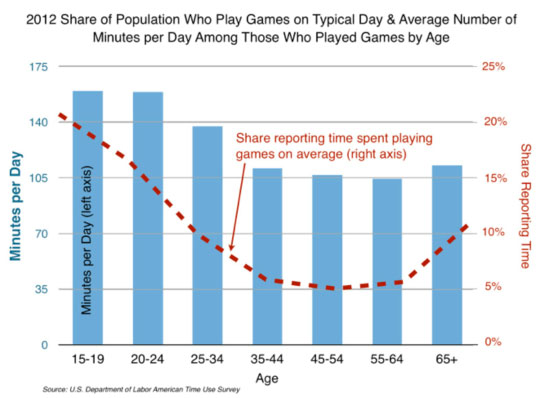 So it could well be that the online leisure activities Wallsten examined plus mobile device games are crowding out an average of one-half hour per day of leisure time that would have otherwise been spent in other leisure and entertainment activities, including visiting location-based entertainment venues.

So there we have it, three different researchers over the last two decades all finding that we are spending less and less time in real world leisure activities including real world socializing. This is a definite threat to the long-term viability of many forms of location-based social, leisure and entertainment destinations.

What this means is that there is a whole new competitive landscape for the consumer’s five hours of daily disposable leisure time. To maintain and even gain market share against the disruptive online and digital world of entertainment and social media, location-based entertainment venues need to raise the bar, raise the quality and appeal, to become an even Higher Fidelity offering, to lure people away from socializing and being entertained on their devices. (for more on High Fidelity, see The bifurcated entertainment market; High Fidelity or die!).

Source of Scott Wallsten ATUS analysis and quotes: What Are We Doing When We’re Online, Working Paper 19549, National Bureau of Economic Research, October 2013, © 2013 by Scott Wallsten