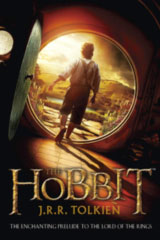 There's been plenty of buzz about the film The Hobbit: An Unexpected Journey, but it's not just about the movie itself. It's also about the film format that director Peter Jackson decided to use. For roughly 80 years films normally have been shot at 24 frames per second (fps). American television is broadcast at 29.97 fps, while European television is broadcast at 25 fps. Each of these have a unique look we've grown accustomed to.

What makes The Hobbit different is Peter Jackson's method of shooting it. He has employed an array of high-resolution RED Epic cameras recording video at 5,120-by-2,700-pixel resolution and at 48 fps (known in the industry as high frame rate - HFR). As a result, viewers see less flicker, motion blur and stuttered movement and extremely vivid detail, more lifelike than 24 fbs films (there is some controversy about using HFR.)

As Jackson wrote in a Facebook post, with 24 fps film (digital or analog), "there is often quite a lot of blur in each frame, during fast movements, and if the camera is moving around quickly, the image can judder or 'strobe.'" Jackson says that HFR does a lot to eliminate these issues, and looks especially good in 3D. According to Jackson, 48 fps resolves the eyestrain issue people have experienced when viewing 3D, although he claims 48 fps also looks better in 2D. Some observers say HFR improvements to 3D movies are dramatic, creating ultra-realistic moviegoing experiences.

HFR is just the latest in a progression of improvements the cinema industry has been undertaking to enhance the cinema viewing experience and to continue to attract audiences as the digital world competition of at-home and mobile video viewing options have increased in availability and decreased in cost. Over the years cinemas have also added stadium seating, 3D, IMAX, digital projection, 4K projection, digital multiple-speaker surround sound systems, in-theatre dining, cocktail lounges, restaurants and even other forms of entertainment such as bowling.

As the digital world makes movies more convenient (accessible on the spur of the moment 24/7 and at lower costs) the location-based cinema experience needs to become more premium (what we call high fidelity), in order to continue to attract moviegoers. And what might seem counterintuitive is that people are willing to pay premium prices for that high fidelity experience. It’s not a question of price so much as it is, “if I’m going to spend my limited leisure time to visit the cinema, it better really be a great experience.” Of course, this also includes the story, acting and quality of the film content as well.

Between the premium and the convenient there is little if any market for films. The film experience needs to be at one extreme of the other. It’s what we call the dumbbell effect; the film viewing market is bifurcated. The markets are concentrated at one end (premium) or the other (convenient). 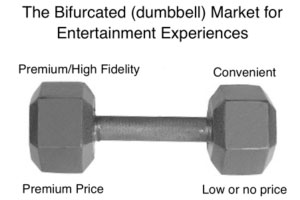 The cinema industry is a great analogy to what is happening (or needs to happen) to all types of location-based entertainment (LBE). The digital world of at-home and mobile entertainment and social media (which mostly is actually digital social-tainment) is becoming more pervasive with more options, higher quality, more convenience, little if any cost and available 24/7. To stay competitive and continue to attract attendance, location-based entertainment needs to raise its fidelity and become a premium experience. The non-stadium seating, analog movie theater stuck in the middle between convenient and premium is in the final stages of extinction. Many LBE venues, including older style bowling alleys and family entertainment centers, are slowing moving down that same path. The future for location-based entertainment is all about raising the fidelity and creating a premium experience. Anything less will lose to the at-home and mobile digital world.