Feasibility and economics for entertainment projects in emerging economies

As the economies of these countries and individual incomes grow, entrepreneurs look to the West and see opportunities of developing location-based entertainment (LBE) projects including family entertainment centers (FECs), bowling centers and multi-venue entertainment and restaurant complexes. Unfortunately, with little history or experience with such projects, these entrepreneurs often make many mistakes.

Over the past 20 years, our company has worked on entertainment projects in 32 countries, many with emerging economies. In many instances our clients were developing some of their country’s earliest LBE projects. During our feasibility and design work on those projects we saw many other projects that made classic mistakes. The mistakes we repeatedly see include:

Build it and they will come
LBE developers in emerging market countries often don’t examine feasibility. They just figure that since they will have the first project and there is no or little competition, success is a sure thing. In fact, in many of the markets there is no tradition or business culture for feasibility, so that is why build it and they will come seems so logical to those developers. Feasibility is a totally foreign concept to them.

Since we are first, quality isn’t important
The assumption here is that since there is little or no competition, the project will work regardless of how low the quality or how cheaply it is built.

Cheap land outside the main city will work
The assumption here again is that since there is little or no competition, people will come regardless of the location.

We’ll make prices low and go for quantity to appeal to the broadest population
The thinking here is that the developers want to attract the C, C- and even D socioeconomic classes who have limited disposable incomes, so prices have to be low.

Start small
We’ll make the project as small as possible and expand later.

All these development approaches are fatally flawed, as we will explain later. As we tell many of our international clients, “We come from your future.” What this means is that in America we have seen the location-based entertainment industry evolve over the years to where it is today, whereas the client is proposing to develop a project at the bottom of the learning curve, where we were in America over two decades ago. We have seen how the industry evolved in America, and it will do the same in the client’s country, but at a much faster pace. So the proposed center will not be able to compete with the new centers that will soon be your competition.

What we have seen in all these markets is that once someone develops an LBE, other business people observe it on a busy weekend or holiday and conclude that there is large potential for entertainment centers. So they decide to develop one, often copying the concept while at the same time trying to improve on it to be competitive. The problem with this is that:

So when we say we come from the future, we mean we can bring our clients the most advanced and long-term successful concepts and formulas that have been tested and proven to have long-term success in America, concepts that would naturally have developed in their markets after five or so years. In other words, based on a feasibility analysis, we can bring them the concept and design today that will be the most advanced and beat out any existing and future completion.

However, there is an important twist to this coming from your future. You shouldn’t exactly import a Western concept and formula. The LBE needs to adapted and modified for the local culture, what our company calls our Prime Directive of international project development:

So getting back to the fatal flaws, here’s why they are fatal:

Build it and they will come
Some people might come, but is there a large enough trade area to make the center and its concept a long-term financial success? Are there enough households with the needed incomes in the center’s true trade area to generate the needed attendance and per capita expenditures (spending per person per visit) on a repeat basis?

Things that have to be considered and evaluated in a market and economic feasibility study to determine this include:

Development and operating costs can vary greatly from one country to another. Things such as labor costs, import duties, rent, land costs and construction costs have wide variance from one country to another. Although rent and/or land and construction costs might be higher in one country, lower labor costs there might offset it compared to another country. And obviously, what people will be willing to pay for entertainment in a particular country has a large bearing on financial feasibility. All these factors have to be carefully evaluated during the feasibility phase.

Since we are first, quality isn’t important
Yes, you may be the first, but not the last entertainment center developed. Competition will soon come and those centers will improve on quality and take away your business.

Cheap land outside the main city will work
What we call community-based LBEs, which include concepts such as family entertainment centers (FECs) and bowling-based concepts, need to have a length-of-stay of around two hours. This means that most people generally will not be willing to travel more than 15 to 20 minutes to come. The location of an entertainment center determines how large its trade area will be and who is in that trade area. Cheap land or rent often equates to a small trade area and low revenue. Often the more expensive land or rent will produce the highest revenues and be the most profitable project, as it will have a larger trade area population and significantly higher revenues.

This is where LBE economics just won’t work anywhere in the world. When you operate an entertainment center, you are selling time-capacity units. For example, if you have a ride, the ride will only accommodate so many people per hour. Let’s say we have a ride that accommodates 20 customers at once and gives a 5-minute experience. It will take a certain amount of time for customers to get off the ride and new customers to get on, so if the ride is operated as efficiently as possible, it might take 3 minutes to change the riders. So you are really selling an 8-minute seat capacity experience. That means the ride at 100% capacity will only accommodate 150 customers or seat-capacity-units per hour.

All LBEs have busy times, such as weekends and holidays, when the vast majority of business well occur and slow times or times when they do no business at all. Lowering the price doesn’t change those time periods; it only increases the number of possible customers during those times. So if you have a low price, that ride we used as an example won’t handle any more customers during the busy times. We can’t increase the number of customers that the ride will handle per hour.

So what happens when you have a low price to attract more people is that your profit is less since you get less revenue per hour, yet the LBE’s capacity, development and operating costs remain the same. The other possible problem is that the center can become too crowded, discouraging repeat business that is needed for long-term success.

Have a little bit of something for everyone – children, families and adults
This approach continues to be one of the great myths in the family entertainment center industry. People think they will have the best chance of success by trying to attract everyone. The problem with this strategy is that when you try to attract everyone, you need to have a little bit of something for each group, so you don’t end up having a wide enough variety, what is know as the needed critical mass, to attract any one group. You end up not being special to anyone. Theme parks are large enough to offer adequate variety to different groups, but family entertainment centers are not (with the exception of very large ones). Another issue is that many groups are not compatible, especially in an indoor environment. Crowds of teenagers will drive away both the family and adult markets. Older children don’t want to be mixed in with younger children, what we call the sissy factor. Adults groups aren’t attracted to children’s or family projects. 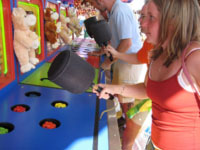 Although it is counter intuitive to most first time LBE developers, time has shown that successful centers focus on one niche market. That is why Chuck E. Cheese’s that targets the young children market and Dave & Buster’s that targets the adult market have been around for 30 years. You won’t find a bar or billiards in Chuck E. Cheese’s or children’s games such as Whac-a-Mole in Dave & Buster’s, and that is exactly why they are so successful. They are highly focused to please one market segment.

Start small
All entrepreneurs and investors want to minimize their risks, so a small LBE with less development cost naturally seems to make sense. The problem here gets back to critical mass. Unless the center is large enough to generate a sufficient length-of-stay (the shorter the length-of-stay, the smaller the trade area will be) and have a wide enough variety to be attractive, it won’t have a large enough trade area nor attract enough customers. And the risk is actually greater with smaller centers.  As soon as someone develops a larger LBE with the needed critical mass, the small center will be perceived as the inferior center.

The development of entertainment centers is full of hazards and myths. This is especially true in emerging markets when local entrepreneurs develop the early centers. The lessons for success have already been learned through more than two decades of trial and error in the West. Being first to market or one of the earliest centers doesn’t assure long-term success. There are no shortcuts to developing a profitable LBE. Feasibility, due diligence and understanding what makes a successful LBE is the only route to long-term profitability.