A new pizza buffet-entertainment venue opened in a Milwaukee suburb can seat an army and includes a number of "firsts" for the industry. Designed and produced by White Hutchinson Leisure & Learning Group, the center represents an exciting new model sure to be emulated by others. Remember, you saw it here first!

StoneFire Pizza Co., a family pizza buffet-entertainment center, has opened its first facility in New Berlin, Wisconsin, a Milwaukee suburb. The center was designed and produced by the White Hutchinson Leisure & Learning Group.

StoneFire Pizza Co. includes a number of first-time innovations for the family pizza buffet-entertainment center industry. It is the first family pizza buffet-entertainment center to include an Asian wok station, a specialty coffee station and to cook pizzas in a gas-fired, stone hearth-style Wood Stone pizza oven. The Wood Stone oven is the largest double-sided oven the Wood Stone company has ever produced, weighs 5 tons and can produce more than 200 pizzas an hour. These upscale buffet features, along with the center's upscale décor, were included to position StoneFire Pizza Co. to attract its targeted white-collar market.

The Discovery Play Dining Room is also a first for the industry with play areas designed specially for children eight years and younger with its train table, watertable, do-it-yourself face painting, pretend pizza restaurant, block play and soft-modular-play structure. It offers parents with younger children the opportunity to dine and socialize without concern that their children will become bored and restless. It also offers a great respite for at-home moms to meet during weekday mornings, normally a time of day with no sales for family pizza buffet-entertainment centers. The Discovery Play Dining Room was developed based upon White Hutchinson's extensive experience with designing children's edutainment centers. 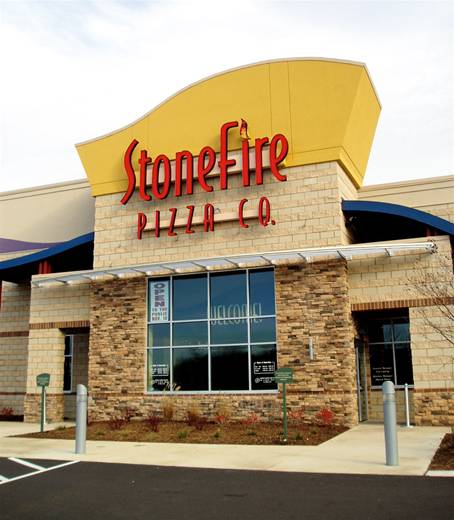 StoneFire Pizza Co. is located at the intersection of interstate I-43 and Moorland Road adjoining the 20-screen Marcus Ridge Cinema on a 10-acre site, of which almost half is a dedicated wetland. It opened Nov. 10, 2006, and operates seven days a week, opening daily at 11:30 AM. Hours are until 10 PM Monday-Thursday, 11 PM on Fridays and Saturdays and until 9 PM on Sundays and holidays. The Discovery Play Dining Room is open for those with preschoolers from 9 to 11:30 AM on weekdays.