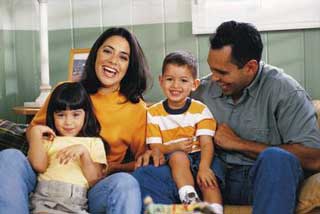 For years the conventional wisdom has been the kids talk their parents into making purchases through pestering or nagging. A 2005 Youth Monitor study of children ages 6-17 and their parents by Yankelovich, a marketing consultancy, shows those perceived concepts of family decision making are out of date and miss the true nature of family dynamics today, which they call team decision-making.

"From cookies to cars, video games to video cameras and snack foods to store, kids and parents are making decisions together about what to buy, do and enjoy," said John Page, Youth Insights Manager at Yankelovich. "Getting kids to nag their parents is not the most effective focus for marketing dollars anymore. In fact, marketers should avoid pitting kids against parents at all costs because it flies in the face of the kind of interaction parents and children want with each other."

Yankelovich found that the nag-factor is a thing of the past, because parents often want and enjoy the very things their children do. In fact, according to the study, 74% of parents say "my child and I have a lot in common when it comes to things we like to do and buy." "What we're seeing," says Page, "is parents and kids being more likely to start discussions about the marketplace, and life in general, more from a place of commonality rather than conflict. The generation gap that many of today's parents experienced in their youth has diminished significantly."

Peter Rose, a partner at Yankelovich, says the study revealed, "It's less about confrontation and more about team decision-making - open and honest discussions about brands and products, reaching a shared point of view."

Dave Siegel, author of the new book, Marketing to the New Super Consumer - Mom and Kid, says moms are training their kids to be consumers at a very young age, resulting in a new partnership - the "four-eyed, four-legged consumer." The creature combines a "time-starved, stressed, but educated mother" and a "savvy, educated kid."

Siegel says every purchase is now a joint discussion between the parent and the child, and age is not a factor, saying, "young and old kids have equal amounts of power."

Beth Thompson, co-author of Kidfluence: Why Kids Mean Business, says that older, often time-strapped parents who are having fewer children but who have more disposable income "want to spend quality time with their kids. (They) need their kids' opinions on what to do and where to go. So, from an early age, we invite children to the decision-making table."

Jim Perry, senior vice president of advertising at Nickelodeon, said their network noticed a shift about six years ago. "There's a real change going on in the family dynamic, a lot more households where both parents work or where there's only one parent," he said. "If both parents are working, then more responsibility is given to the kids."

This new paradigm of family decision making is further confirmed by a Canadian study of kids by Corus Entertainment. Sally Tindal, director of publicity and media relations at the company, says that Canadian kids aged nine to 14 "have a seat at the decision-making table with their parents, who are seeking their input in making household purchases." She went on to say the study revealed "a high degree of interaction and dialogue between kids and parents. This is not a nag factor. Parents will make the final decision, but they'll take the advice from their kids when it comes to a buying computer, a DVD player, a car, a family vacation and so on."

The Yankelovich study found a significant increase in the this team family decision making during just the past few years:

Page from Yankelovich summarizes his company's study findings this way, "For many parents, the emotional rewards found in sharing experiences with their children become self-sustaining and spill over into other categories. So while marketers must rethink some of the old standbys in marketing to kids, they also have tremendous opportunities to tap into the 'Team Decision-Making' dynamic by understanding that the pre-shopping, actual purchase and usage of many products and offerings these days are family experiences."

An interesting finding from the Yankelovich study that doesn't directly concern the dynamics of parent and child decision making is that nostalgia holds great sway among parents, with 87% agreeing they "get a real kick out of seeing my children enjoy the same kinds of things that I did when I was a kid."

It's no longer a story of hook the child who will nag the parent to come, or the parent telling the child where they are going. Even for children as young five and their parents, the LBEs need to be seen as a win-win by both children and parents for them to reach a joint decision of "let's visit."