Going to the movies
Let’s start with one of the most popular and affordable forms of out-of-home entertainment, movie-going at a cinema: 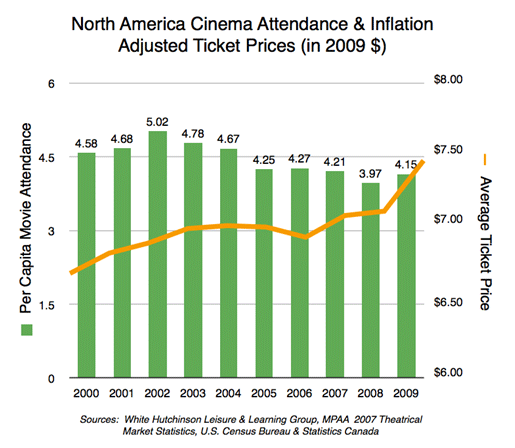 Examining more closely who goes to the movies is very revealing. In 2009, only 49% of people age two or older in households with incomes of less than $25,000 went to the movies. The percentage participation rate increases as incomes increase, up to 79% of people with incomes of $75,000 or greater. Higher income moviegoers also attended almost twice as frequently as the lower income moviegoers. 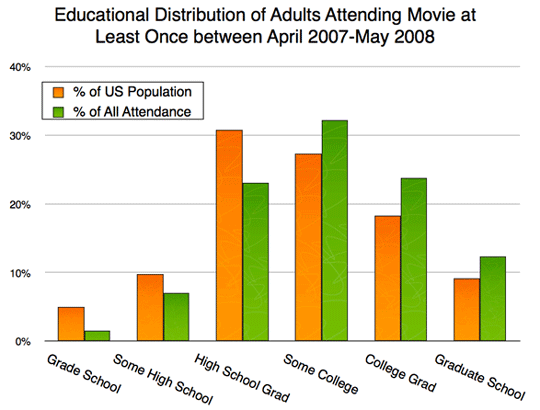 Historically, the movie attendance participation rate for adults has been dropping across all income and education levels. In 1997, 65% of adults went to the movies, in 2002 it dropped to 60% and in 2008, it had decreased to 53%.

Not only is the participation rate of visiting a cinema decreasing, we are also seeing an increase in the social stratification of attendance. In 2002 adults with no greater than a high school education comprised 34.9% moviegoers. In 2008, that had dropped to 31.6%, almost a 10% decrease in participation. During the same period, the percent of adults with some college education or a college degree who attended movies grew from 65.1% to 68.3%, a 5% increase in participation.

Participation rates for other out-of-home activities
When we examine attendance at what are called ‘benchmark art activities’ (jazz, classical music, musical and non-musical plays, ballet and the art museums) and historical parks and sites, and even sporting events, we find a similar pattern. The percentage of adults participating in these out-of-home activities, as well as the average number of events they attended, has been declining more or less continuously since the 1990s. The decline of the participation rate varies between 15% and 28% and the decline of per capita attendance by attendees varies between 9% and 12%. This is even true for overall attendance at sporting events where the overall participation rate has dropped from 37% of adults in the early 1990s to 30.6% in 2008. Again, education is a primary indicator of participation, even for sporting events. For example, in 2008, only 17.8% of adults with a high school education attended a sporting event, whereas 44.5% with a Bachelor’s or higher college degree did. And since the early 1990s, for all activities, overall participation and attendance is shifting to more educated people, i.e., they represent a larger percentage of overall attendance today than in the past. We are seeing an increasing social stratification of attendance in all these out-of-home leisure experiences. 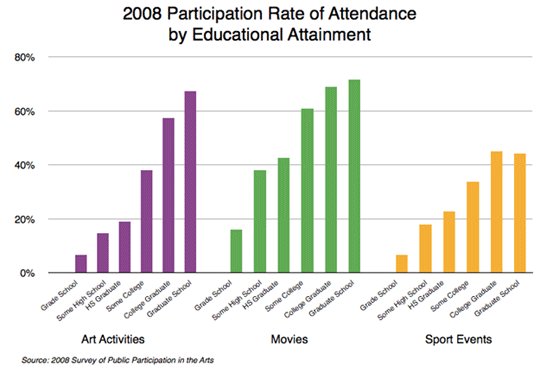 Only in one category, amusement parks, do we find the populations’ overall per capital attendance holding constant (setting aside a minor decrease due to the Great Recession).

Obviously, data for 2008 and 2009 will reflect a possible impact of the Great Recession. However, our analysis of historical data indicates that the decreasing participation rates, decreasing attendee per capita attendance and increasing educational stratification are long-term trends.

It should be remembered that these trends are industry wide. Within any one category or venue, one particular facility could have increasing attendance while others are seeing a decrease.

The Nielson Company reports that an increase in video viewing across all major media platforms continues to be fueled in part by the adoption of technologies that improve the consumer experience both in quality and convenience. They found that the penetration of HDTVs, DVRs, broadband and smartphones increased at double- or even triple-digit rates during the last two years and that time spent watching TV and watching videos on the Internet or mobile phones likewise continues to increase. The iPod, first introduced in 2001, and all its derivations have become the music listening preference for much of the population. Just about everyone is now wired in one form of the other.

Research in the arts finds that U.S. adults, by a ratio of 3 to 2, are more likely to now use electronic and digital media to view or listen to the arts rather than attend a live arts event, with the sole exception of live theatre. And interestingly, there is a strong correlation between electronic/digital participation and live attendance, again with education being the best predictor of electronic participation.

Electronic media probably also explains the decrease in overall sports event participation due to all the ESPN and other sports TV channels and live sporting event subscriptions available on cable. HDTV, home theatre systems and the convenience of NetFlix and even web-based movie services are certainly cutting into attendance at the cinema. It’s hard for historical parks and sites to now compete with the History Channel and other cable TV channels that can dish up history in an entertaining fashion.

As noted previously, the one exception to the per capita attendance decline at real world experiences is at amusement parks because they still offer experiences that can’t be replicated in the virtual world. Their thrill level is often off the chart and many, especially the theme parks, incorporate cutting edge electronic technology in attractions, combining the best of both the real and virtual worlds.

Affordability
Our company’s research indicates that the migration to experiences in the virtual world is not the sole cause for these trends. A second major contributor is affordability, which has two different components. The first is the cost of attendance. BIGresearch reported in their June 2010 American Pulse survey that 72% of Americans now consider watching movies at the cinema as too expensive. Just like movie theaters, where ticket price increases have exceeded inflation, the same is true for many other out-of-home leisure destinations, including most sporting events (average theme park ticket prices, adjusted for inflation, have held constant). This makes attendance especially less affordable for middle and lower income groups, contributing to their decreasing participation rates. There is a strong correlation between income and educational attainment, explaining the increased educational stratification of attendance.

The second component of affordability is the shrinking middle class in the U.S., a trend that started a generation ago and has been accelerated by the Great Recession. The rich are getting richer and the poor are getting poorer. As a result, more highly educated and higher income consumers are accounting for a larger percentage of out-of-home leisure spending. In 2008, households with the highest 20% of incomes accounted for more than one-half (54.6%) of all out-of-home entertainment spending and the top 40% of households by income accounted for more than three-quarters (75.4%) of all such spending, an absolute increase of 4.5% from 2000. Looking at out-of-home entertainment spending from an educational attainment perspective found college graduate headed households increasing from 53% to 56.6% of such spending. 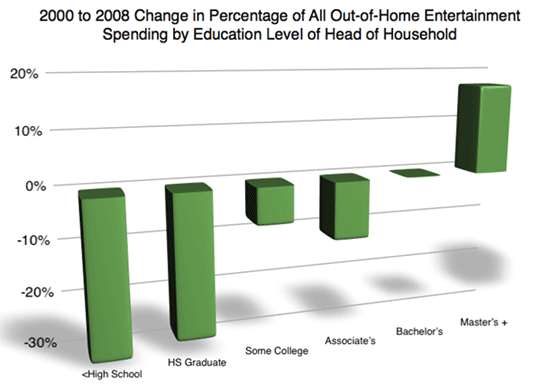 Strategies
Okay, enough of this nerdy stuff. What does all this mean for out-of-home leisure venues? Basically what these trends boil down to is that bricks and mortar entertainment and leisure attractions are losing market share to the electronic virtual world and higher socio-economic households are accounting for an increasing share of both real world attendance and spending.

So what strategies do venues need to adopt to prosper based on these trends? Here’s a capsule summary of some of the proactive strategies our company is using for our clients’ projects:

It‘s a whole new world out there, especially the new competitive virtual world. Understanding who to target as your guest and what is your real competition is the key to attractions prospering in the future.

Randy White is CEO of the White Hutchinson Leisure & Learning Group, an international firm that specializes in production, design and consulting for family and children's leisure & entertainment venues. Randy can be reached via the company's website www.whitehutchinson.com or at +1.816.931-1040, ext 100.