A version of this article was originally published on Blooloop.com.

The Future of Out-of-Home Entertainment

No one can predict what the future holds for out-of-home entertainment. But we can look at recent trends and their direction to have some indication of what the future might entail.

Our company, White Hutchinson Leisure & Learning Group, is constantly monitoring and researching how consumers are spending their leisure time and disposable income to understand how to help our clients develop successful leisure venues. Here’s some top line findings from our latest research on U.S. consumers:

An examination of the year-to-year data shows that none of these changes are attributable to the Great Recession, but are rather longer time trends

From 2004 through 2009 we saw the following changes in average household expenditures when adjusted for inflation: 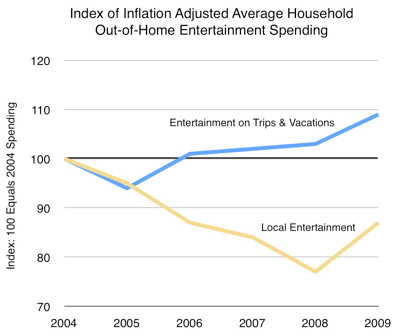 Out-of-home entertainment spending still pales compared to food away-from-home expenditures, basically restaurant spending, which is over four times as much per household, with the households with the 40% highest incomes also accounting for 3/4s of all such spending. Since 2004, household food away-from-home expenditures have remained flat when adjusted for inflation due to spending cutbacks during the Great Recession.

So what does all this tell us? Here’s our company’s interpretation based on the above data and our other research.

While leisure time spent in the digital world is increasing, both time and expenditures for out-of-home entertainment near the home are decreasing. The decrease in electronic expenditures does not run counter to this time trend, as consumer electronics are constantly becoming less expensive. What you get for your money today is so much more than in the past and most items have significantly reduced in price. Four years ago I bought a 40” LCD high definition television for $1,600. Just the other day, I saw the same size and brand television for sale for $700, and it had more features and better performance.

At the same time, ownership of electronics has increased, giving more consumers access to it. For example, between 2000 and 2008, household computer ownership has more than doubled across all types of households. Since 2004, the percentage of households owning a video game console has increased from 1/3 to 60%.

The digital world even appears to be taking time away from real world socialization. In 2009, the average American spent 30% less time attending or hosting social events than in 2003.

What we are witnessing in terms of entertainment as well as other forms of leisure is a migration from the real world to the virtual world. But why is this happening? It can best be explained by looking at the world of imagination. Of all the voluntary and pleasurable activities American’s can spend their leisure time doing, they spend more time participating in experiences that are not real, that take place in their imaginations, than anything else including eating, drinking, participating in sports, socializing with friends, even sex. They spend about 1/5th (18%) of their waking hours and over one-half of all their leisure time just watching television alone. The imaginary world that they enjoy is the vicarious experiences created by others, including television, books, comics, movies, plays and video games and the worlds we create ourselves including daydreaming and fantasizing. This obsession with the imaginary, especially through electronics and its virtual worlds, can be found as well in European society and is now probably prevalent in most or all economically developed nations.

Our fascination with the imaginary world is not new. It dates back to cavemen. Besides daydreaming and fantasizing, the earliest world of imagination was probably listening to stories around the campfire.

The imaginary world is so powerful since, in many respects, it is superior to the real world. Most life experiences are rather routine and often boring. Not imaginative worlds, which give us many experiences more wondrous, fantastic and powerful than reality could ever be. Clive James, a critic, put it this way; “Fiction is life with the dull bits left out.” Perhaps that is why people would rather watch Friends on television than spend time with their actual friends, or why reality television shows such as Survivor or The Amazing Race are more interesting and exciting than any vacation can ever be. We can experience worlds that don’t exist such as the worlds of Star Wars or Harry Potter. The imaginary world is safe, a place where we can experience things that would be socially unacceptable, dangerous or even deadly in the real world.

Electronics and media that we can enjoy at home, including video game consoles, television, computers and the Internet, bring unbelievable imaginary worlds to our armchairs. We can be avatars with whatever personality and appearance we want and roam endless worlds of fantasy. Texting, Facebook and other social media allow us to socialize with our friends without leaving home. A new phenomena, what we call mobile entertainment, a new category of out-of-home entertainment brought about by smart phones and similar devices, now brings us entertainment that we can enjoy while we are doing other things no matter where we are.

The recent report, The Future of Free Time, by the Future Foundation and lastminutetravel.com looked at leisure time in the UK and predicts that Western society is moving in the direction of Japan, where electronic media and its imaginary worlds are all consuming to youth. The report points out that the i-Generation, children born after 1995, has never experienced education, work or play without the internet. The only world they’ve known encourages them to explore the planet virtually. The report suggests the i-Generation might reject travel altogether in favor of gaming, social networking and virtual worlds of imagination. “They will find out-of-home activity too ‘action-poor.’ . . . In the future, in-home entertainment technology will be more exciting, more interactive and more visually appealing.” The report even predicts that, “As in-home entertainment becomes even more engaging, a group of young people will emerge who do not go out any more.” 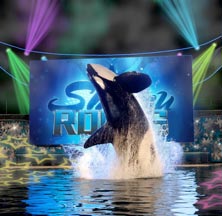 Scary stuff and supported by some of our research findings. Is there hope for the real world of out-of-home entertainment or is it doomed to become a dinosaur?

The only positive non-mobile out-of-home entertainment trend that may give us a clue is the increased entertainment spending on trips and vacation. Entertainment experiences at many vacation destinations are far more exciting than community-based entertainment. Many, whether 100% reality, such as SeaWorld’s live Shamu Rocks show or massive ropes courses and zip lines, or those that combine reality and technology such as Wild Arctic that includes a jet helicopter simulator experience at SeaWorld or Universal Studio’s The Wizarding World of Harry Potter, far outshine any in-home digital virtual experiences. Why? Because they are either real experiences that technology cannot replicate (at least until an in-home Star Trek holodeck becomes a reality) and/or they use technology to enhance the real world experiences. Vacation-based entertainment venues are able to produce these alluring experiences since their high attendance and admission prices make the venues’ economics possible. Of course another factor, even for those attractions that aren’t as extreme, is that vacationers leave the at-home entertainment competition at home. The future of this trend, of course, is dependent on I Generation’s willingness to leave their homes. 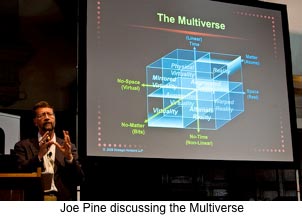 When it comes to non-vacation out-of-home entertainment, larger regional attractions like theme parks and waterparks with their thrill rides and slides should continue to be appealing due to the physical intensity of their experiences. The real challenge is for smaller community-based entertainment venues such as family entertainment and cultural venues to compete with at-home entertainment. We have identified three possible opportunities.

One thing is clear, the future of location-based out-of-home entertainment is not certain. Only those venues that understand the growing competition from at-home and mobile electronics and learn how to change their formulas to make their real world experiences more engaging and relevant to consumers will prosper.