This article first appeared in the September 2009 Leisure eNewsletter.

The American family moves as a unit, as families throughout the world do, for the most part. That means even if the main target of your business or project is parents, kids will have a substantial influence. Whether it’s a shopping center, restaurant, location-based entertainment facility or other location-based business, kids determine whether its feasible for parents to visit the establishment, how long they stay and how much they spend. That influence can be very positive: research shows parents spend 40% more in a supermarket when they have children in tow.

Noted retail anthropologist Paco Underhill of Envirosell put it this way, “School-age children make incessant demands for toys and foods. Toddlers quickly learn they can affect their parents’ behavior in stores. Even the smallest infant can cause a frazzled parent to abandon a shopping trip by throwing a tantrum in the middle of a supermarket. It makes sense to think about young children as a presence, if not a force, in commercial and retail environments.”

Families with children are a spending machine not to be ignored. In 2007, families with children under age 18 comprised 31% of all U.S. households. Married-couple families with the oldest children under age 18 and single parent families accounted of 29% to 30% of all spending on food-at-home; food-away-from-home; household furnishings, appliances and equipment; apparel; and entertainment spending. And when it came to out-of-home entertainment spending, they accounted for 36%. 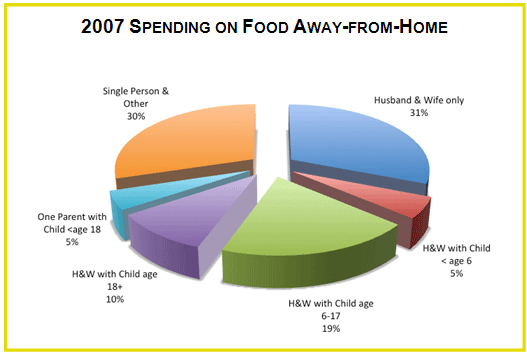 There are many aspects to consider in making a business family-friendly, or at least doable enough for families that the child doesn’t effectively veto the parents’ activities and purchases. And the younger the children are, the more family-friendly the business needs to be to attract families.

First and foremost is accessibility. Parents with very young children typically put them in strollers, some models of which have practically become miniature versions of SUVs. The first potential barrier may be the entrance to the business. Can parents enter easily with a tricked-out stroller? Is there room for them to maneuver it between the aisles, furniture or equipment?

A bored and whining child can quickly end parents’ dining, shopping or other activities. “Sorry, no dessert tonight, we need to get out of here with our child.” “Sorry! Can’t try on the other dress.” “Sorry, I need to leave the mall now, so I can’t make it to that store with the great promotion after all.” Offering activities for children, whether it is something they can do at the restaurant table or a way to play or remain occupied while their parents do other things can cancel out the whine factor. And at sit-down restaurants where you order at the table from a wait person, quickly bringing a hungry child a snack while the family waits for the meal will prevent all kinds of kid-related issues.

One of the biggest challenges with designing environments to occupy children, especially young ones, is to understand how children will make things in the environment interactive that were not intended to interactive. There are vast differences in the way children and adults interpret their environment. Adults view the environment in terms of form, shapes, and structure and as background. If a sofa is in a public place, adults will interpret it only for its socially acceptable use, for sitting upon. Children, on the other hand, interpret the environment holistically and evaluate it for all the ways they can interact with it. They are biologically programmed to use the environment to aid their development by exploring ways they can use it for activity. They look for the environment’s affordances -- the opportunities it affords them to do things. Also, children interpret the environment in terms of its possible function rather than its form. So in the case of the sofa, because children haven’t yet acquired and aren’t developmentally ready to accept social norms for its use, they see the couch as something that affords them opportunities for bouncing, sprawling, or climbing on, jumping over and hiding behind. A rock, if small enough, is interpreted by a child as something to grasp and throw — it affords grasping and throwing. If the rock is really small, for a toddle it can afford putting it in your mouth. If the rock is larger, it could afford stepping on, looking under or climbing on. Another example is the placement of displays and merchandise. If you don’t want a 2-year-old to touch it or take it, don’t place it at a height a 2-year-old can reach. One common fixture in banks and many stores with queues is the rope and stanchion. A typical 5-year-old sees it as an affordance to jump over or hang on. When a child behaves in an environment in a way that adults see as improper, it is usually not the child’s fault, but rather adults’ fault for not appropriately designing the environment for children.

Most affordance “misbehaviors” are the result of the many store, shopping center, mall, restaurant and leisure location designers who are young singles or men. They understand the mechanics of design, but have little or no knowledge of children and child development and behavior.

How family-friendly restroom facilities are has a significant impact on how parents view a business. Most restrooms follow the design paradigm that has been used for years, and as a result are not family-friendly. Restroom doors are difficult to open if you’re pushing a child in a stroller. Changing tables hinged on the wall are not exactly easy to use when you have the baby in one hand and the bag with all the paraphernalia in the other. You either put one or the other on the floor (yuck!) or try to use your elbow to lower the table. Then, the table has room for the baby, but where do you put the bag? (On the floor? You must be kidding!). Ever try to take a toddler in the toilet stall with you? It’s a little like back in the old days when college students tried to see how many of them could fit into a telephone booth. We could go on and on with the many challenges typical restrooms present to parents and children alike and how un-family-friendly they are. The list has dozens of issues. Over our 20 years of designing leisure facilities, our company has conducted extensive research including focus groups with moms, and tested out many restroom design elements. We have developed family-friend restroom design standards that also follow the principles of universal design, making them user-friendly to those of differing abilities. If you see one of these restrooms, and especially if you use one as a parent with a younger child, you’d recognize the experience as night and day compared to using a restroom of standard design.

When it comes to designing environments and experiences that work well for both parents and children, or at least are kid-proof so children don’t misbehave, it’s the little details that can make all the difference. Disney World and Disneyland, renowned as very family-friendly, sum it up this way:

“What’s our success formula? It’s attention to infinite detail, the little things, the little, minor, picky points that others just don’t want to take the time, money, or effort to do.”
John Hench
Disney Imagineer 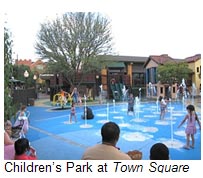 Many location-based businesses, as well as shopping centers, are adding features to be more family-friendly and appealing. Town Square, a new lifestyle center in Las Vegas that caters to residents rather than tourists, has a great 13,000-square-foot outdoor children’s park with lots of play activities. It’s also parent-friendly with lots of seating, a single entrance and restrooms within the fenced park area. The Orchard Town Center, a lifestyle center in Westminster, Colorado, features a family lounge area with family restrooms, built-in changing tables, nursery rooms and a time-out resting area. The Yorktown Mall in Lombard, Illinois, chose to have an indoor children’s play area modeled after a tree house -- rather than one of those soft foam play areas that just encourages children to run from one object to another, which is not quality play and can be dangerous.

Zoos are realizing it takes more than animal displays to have appeal to families with younger children. The St. Louis Zoo (Missouri) was probably the pioneer with the first children’s play area, understanding that young children need to interact rather than just view. In the “Just Like Me” play area in the Emerson Children’s Zoo, children can imitate their animal friends by climbing a spider web or digging like an aardvark in a sand area. Opened in 2001, The Hamill Family Play Zoo area at the Brookfield Zoo in Chicago, Illinois, allows children to do such things as touch live animals, plant a garden, examine animal X-rays, finger paint with mud, search for bugs, explore a stream and build animal homes. The concept is spreading. The San Antonio Zoo (Texas) recently opened Kronkosky’s Tiny Tot Nature Spot. 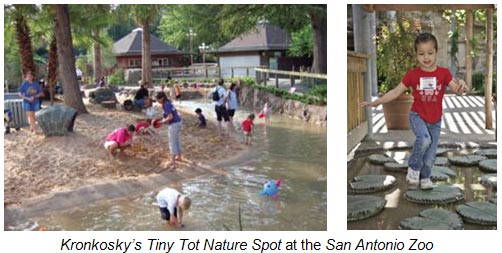 The San Diego Zoo (California) Children’s Zoo includes a discovery playground. The Louisville Zoo (Kentucky) recently opened the Calistoga Splash Park for children, and the Toledo Zoo (Ohio) opened a $7.5 million fully experiential Nature’s Neighborhood children’s play area. There are many more. All these zoos have seen increased attendance and revenues as a result of their investments in activities for families with younger children. 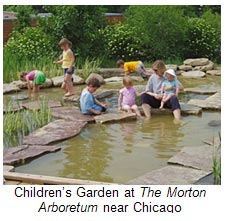 Even Six Flags, with its many family-oriented theme parks, discovered a few years ago that its concept had become too trill and teenager-focused. To regain appeal to the family market, the company refocused. Among other improvements, it beefed up the younger children’s areas and added family sections in many parks. It all equates to revenue. According to theme-park consulting firm International Theme Park Services, a family of four spends 25% more than four teenagers during a day at the park. Amusement Business magazine reports the difference to be as high as 40%, since teenagers often use season passes and forgo high-priced food and souvenirs.

Restaurants are learning parents value more than price. The menu has to appeal to young palettes while also meeting the parents’ standards for nutritious and healthy meals. Restaurant meals ordered for children accounted for 1.3 billion visits and $5.6 billion in sales in 2008 according to research by the NPD Group. NPD also found restaurant parties with children spend almost twice what adult only parties spend. 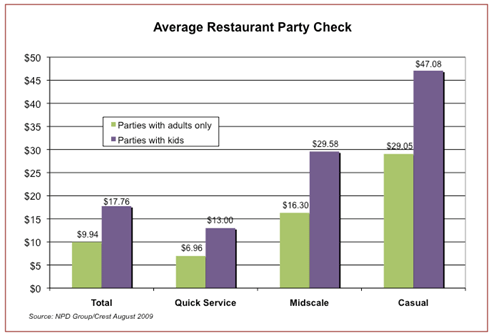 The new recipe to attract families is get rid of the French toast sticks and put more broccoli, carrots and fruit on the menu.

Although families with children may not make up the majority of American households, they control 30% or more of all spending. With the growth of single-parent and dual-income families, many parents have no choice but to bring children along. Being family-friendly by appealing to both parents and children and child-proofing the business takes a lot of planning and attention to details. But such efforts can bring big benefits with increased customer traffic, revenues and profits.

Randy White is the CEO of the Kansas City, Missouri- and Doha, Qatar-based White Hutchinson Leisure & Learning Group. The company specializes in the feasibility, design and production of location-based entertainment and leisure venues. Randy can be reached at +1.816.931-1040, ext 100 or via the company’s website www.whitehutchinson.com.