Originally published as feature article at Blooloop.com in March 2011.

Location-Based Entertainment: How to Beat the Digital World at its Own Game

It’s hard to pinpoint exactly when the digital entertainment revolution started. Perhaps it was with Computer Space, the first video arcade game released in 1971 that pre-dated the more popular Pong in 1972. Before 1971, entertainment was basically limited to board games, television, radio, the LP phonograph at home and various forms of out-of-home entertainment including the cinema, zoos, museums, parks, amusement parks, etc. (this was before even Chuck E. Cheese’s and family entertainment centers). Communication was limited to the landline phone (the fax had not even come into use.)

In the 40 years since 1971, the world of entertainment and communication has undergone dramatic change with digital entertainment and communication now consuming the largest portion of the average person’s day, around 7 hours on average. We now have the Internet, e-communication (e-mail, texting and IM), at-home and mobile video gaming and social networking, DVRs, high-definition and 3D television, instant movie streaming, smart phones and mobile devices and GPS, just to name a few.

Statistics Tell a Story
Let’s take a look at some recent statistics: 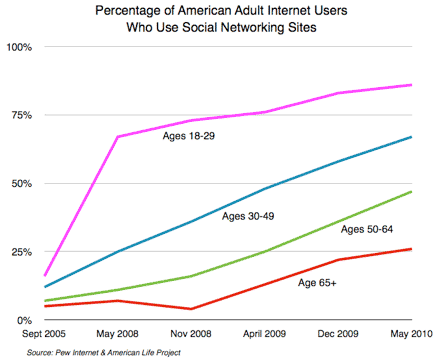 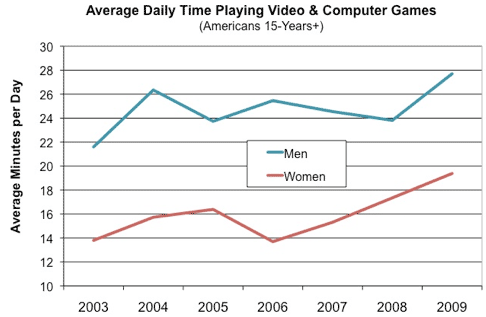 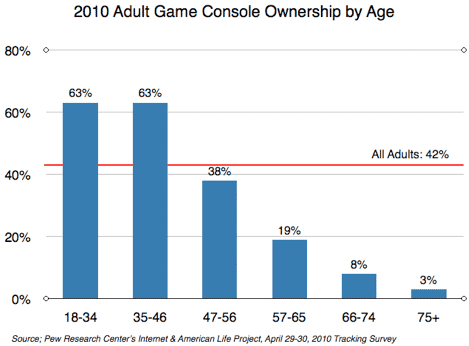 That’s a lot of statistics to absorb. We used them to make the point that the Internet, video gaming, social networking and e-communication are an increasing and significant part of American, UK and Western consumers’ daily lives.

Now here’s the scary part for venue-based entertainment: the average amount of daily leisure time has basically remained the same over the past decades, currently an average of 5 hours and 15 minutes a day for American adults. That’s right; people have not gained more total leisure time to allow them to spend more time on video gaming, social networks and e-communication. No, that time has not come from less television viewing. Americans spend a little over half (54%) of all their leisure time (2 hours 49 minutes a day) watching the TV and the amount of TV viewing time has actually increased by 9% since 2003.

Leisure Time is a Zero-Sum Game
When it comes to leisure time, it’s a zero sum game. The increased amount of leisure time being spent on video games, social networking and e-communication has to come from a decrease in other leisure activities. Yes, about 20% of social networking and e-communication is multitasked while watching television or doing other activities. Still, that does not account for all the increased time spent gaming and networking.

Expenditure Data Corroborates the Trend
This trend away from real world entertainment to the digital world is also supported by expenditure data: 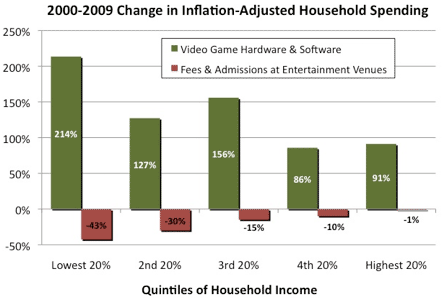 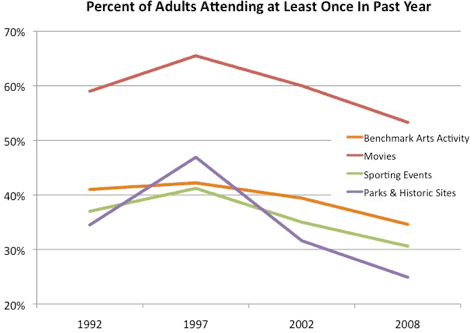 Furthermore, for those adults that have been attending, the average number of times they attended (their per capita attendance) declined between 9% and 12%. From 2003 to 2009, the total amount of time Americans age 15 and older spent attending the arts, entertainment venues and sporting and recreational events decreased by 29%. North American per capita movie attendance has declined from 5.0 visits a year in 2002 to 3.9 visits in 2010.

The Appeal of Video Gaming
So, what makes video gaming, social networking and e-communication so powerful an attraction that people are foregoing venue-based entertainment? The research is pretty overwhelming in its conclusions. World-renowned video game designer Jane McGonigal sums up the power of video games by saying, “Reality, compared to games, is broken... In today’s society, [video games] fulfill genuine human needs that the real world fails to satisfy.” Joe Pine, author of The Experience Economy and a forthcoming book on the Multiverse, puts it this way, “Virtuality, conceived in imagination and birthed in immateriality, enables experiences otherwise impossible in reality.”

What it really boils down to is the human hedonistic tendency; we like to do what gives us maximum pleasure, the most happiness. A good video game activates all the neurological and physiological systems that bring on happiness. The mood-boosting of game play causes players’ brains to become awash in dopamine, contributing to the appeal and sometimes-addictive nature of video gaming.

It’s All About Socialization & Community
There’s another quality of the appeal of video games that also applies to social networking on sites such as Facebook or Twitter and e-communication. It’s the appeal of socializing. Connectiveness, and the socialization that breeds it, were essential to the survival of early mankind. It’s a human instinct to stay connected. We are biologically driven to co-mingle. We are social animals. Research shows that 80% of video games are socializers; they play for the socialization aspects of the games rather than the actual game itself. Perhaps not so surprising then that as of January 2010, 54% of social gamers were women.

Video games make it easy for us to build strong social bonds with friends and family and create social communities with people like ourselves, many we have never met in person. Games like the MMORPG (massively multiplayer online role-playing game) subscription game World of Warfare with 12 million players or Facebook games such as CityVille with 96 million players and FarmVille with 51 million players are highly social; their players’ shared interests creates a sense of community.

Gabe Zichermann, one of foremost thought leaders on what is called gamification or game engineering, maintains that people are motivated to play games by four primary factors. In decreasing order of importance they are: status, access, power and stuff. However, they are all dependent on an overall feature, community. For without a community around you to validate your status, access, power or stuff, they have no real value. So even for non-social video game players, belonging to a game playing community is critical to the overall appeal of video games.

Bring on the Oxytocon
Of course social networking is all about socializing, finding new friendsand creating community. Research shows that socializing and e-communication triggers the release of oxytocon. Originally recognized as the hormone that forges the bond between mothers and their babies, oxytocon is now seen as the social glue that adheres families, communities and societies together. And recent studies indicate it also causes us to be hardwired for all forms of digital communication and creating social connections; the brain interprets e-connections the same as in-person socialization. As a result, social networking can be addictive. One study found that when college students gave up media for a day, many suffered withdrawal symptoms, no different than going cold turkey giving up drugs. They said the most painful part was, “losing their personal connections”. They felt that going without media meant going without their friends and family.

Not only does social networking make use happy, research studies have shown that it also increases our self-esteem.

The bottom line is that video games, social networking and e-communication make use feel good about ourselves and happy, predominately due to their social interaction and relationships with other people. That is what makes them so attractive, so addictive versus many other options we have for our leisure time, including many venue-based entertainment options.
“We are consumed by what we are nourished by”. William Shakespeare

The Relationship Age
We have entered what some researchers are calling a relationship age in which interactions between people are more important than at anytime since the industrial revolution. The Yankelovich consumer research firm believes the biggest of the big trends today is social engagement, which they define as “the active pursuit of connection, interaction and affiliation with other individuals to enable the sharing of ideas, opinions and passions . . . The act of engaging in conversations with others – live or virtual – to strengthen bonds between individuals and foster the emotional comforts of connection”. The trend has also been described as hiving, a quest for more connectiveness with family, friends and neighbors.

Social Engagement Face-to-Face
Social engagement is what’s driving the popularity of video games, social networking and e-communication. However, research shows that when you socialize in the same physical space face-to-face, you supercharge both the positive emotional impacts and the strength of the social bonding that takes place. And when you are playing a game or physically involved in an activity with others, especially people you know really well, that creates more happiness than participating in passive activities with them. Studies have also found that when you engage in a passive activity with others, such as watching a movie, you actually don’t feel any better afterwards, whereas when you play a game with others, you do.

Mass Mingling to the Rescue
There is a counterpoint for every trend. For people now living large parts of their lives online social media and e-communication are fueling Mass Mingling: the trend of an increasing human desire for interaction in the real world. The digital world has made it easier than any time in history to build and maintain an expanded network of personal relationships,
discover long-lost friends, find like-minded people and stay in touch.

Thanks to the increasing sophistication of social media, arranging social gatherings in the real world has never been easier:

The digital social world has unlocked our human need to interact with other people, and now we want to meet up IRL (In Real Life).

Making Real World Entertainment Venues More Appealing
What all this means is that real world attractions have an opportunity to compete with the digital world by creating a bricks-and-mortar location for social engagement, along with real-life games. If you also add elements that can’t be replicated in the digital world, like sharing food and beverage together and real world visibility (both to see and be seen), you have a super attractive social experience that really makes people happy.

Examples
The real world group games that have stood the test of time have done so because of their strong socialization component. They include bowling, billiards, laser tag, golf, miniature golf and even bocce (becoming popular in non-Italian areas in America). Multiplayer games with their strong social properties such as Pac-Man Battle Royale, Galactix, Gaia Attack 4 and Deal No Deal, as well as six- and eight-player games are making a comeback in gamerooms.

One example in the bricks-and-mortar world of the success of combining social games with food and beverage in a great social environment are the new bowling lounges such as Lucky Strike, Splitsville and Sparians. They have reinvented the bowling experience for young adults and are generating sales previously unheard of in the bowling industry. In a sense, these venues have become third places (1st place is home and 2nd place is work), informal community meeting places. Starbuck’s became popular and was able to command a premium price for their java, as their shops were third places. Again, it was all about the magnetism of the social experience and a sense of community.

To counter the competition from the digital world, cinemas have started to reinvent the movie going experience by adding activities people can do together including socializing in coffee shops, bars and lounges, dining together and participation in other active types of entertainment such as bowling.

A new form of children’s entertainment center has evolved to tap the real world socialization needs of stay-at-home mothers with young children: the play café. Although they do not offer games, play cafés are designed as a third place where moms can meet up with other moms and enjoy good food and beverage together while their children are engaged in play.

These are just three examples of how entertainment venues can reinvent themselves to compete with the digital world by employing the very features that make video gaming, social networking and e-communication so attractive. It’s all about beating the digital world at its own game, but in a real world face-to-face environment that can be even more appealing.