The Challenges of Developing Entertainment Projects in Africa 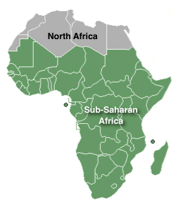 Except for the recent press about the Arab Spring revolutions in North Africa, Africa basically remains under the radar for. What may be surprising is that six of the fastest growing economies in the World are found in the “forgotten continent” of Africa. The six African Lion economies – Angola, Nigeria, Ethiopia, Chad, Mozambique and Rwanda – had annual average GDP growth rates of around 8 percent from 2001-2010. The IMF forecasts that seven Sub-Saharan Africa countries will be in the world’s ten fastest growing economies 2011-2015.

Africa is home to 1.0 billion people, 15% of the world’s population, making it the second most populous continent. With 54 countries, Africa is divided into Northern Africa with its Arab cultures, part of the MENA region (Middle East- North Africa), and into Sub-Saharan Africa. There are major cultural, political and economic differences between the two regions and the different countries. There is no such thing as a typical African country.

Although the poverty rate in Africa is declining, the majority of populations in almost all countries are in poverty. However, that doesn’t mean there aren’t opportunities for location-based entertainment. In many of the larger cities there are significant populations of middle and higher income families. Africa’s middle class is estimated to grow from about 60 million today to 100 million by 2015.

Feasibility
If you think you will get demographic information from a census, think again. Often census data is unreliable, out of date, or non-existent. Or it doesn’t contain any detailed information other than regional population counts. Our company has had to turn to secondary sources of information as indicators of incomes and population counts such as private school enrollments and car ownership. Then combined with field observations, we have extrapolated the potential target market size that has sufficient incomes to be a target market.

Political Changes and Revolutions
In some countries, for a year or so before new elections, all investment comes to a screeching halt, as business people are not sure of what the future economic climate will be. In Egypt, the building permit for our ladies membership club and children’s edutainment and enrichment center was delayed for 8 months due to the revolution there.

Corruption
Government corruption is endemic in many countries. In some countries, if you aren’t prepared to pay a bribe, there will be no building permit. Often after an election government officials refuse to take any action until the new administration decides what the official bribe schedule will be and how bribes will be divided up the line. In another country, the contractor we were working with told us that to secure government work, he had to add 30% to his cost.

Land Availability
In some countries, the government controls almost all the vacant land, making land acquisition a very political matter. Only if you are politically connected do you stand a chance of acquiring or leasing a parcel. Where private land is available, it is often very expensive, two million or more dollars an acre in suburban areas, and large tracts are rare. That means vertical development. Our project in Egypt is three-stories with underground parking and a two-level kitchen, the one in Lagos has a two-level garage with a two-story building above. For entertainment projects, that presents the design challenge of generating adequate customer traffic on the upper floors as well as all the logistics of moving food, dishes and trash with dumbwaiters. That plus the vertical transportation for customers and emergency stairwells take up a considerable percentage of the floor space, further challenging the project’s economics.

Infrastructure
In the Western World, we take adequate infrastructure for potable water, electricity and sewage for granted. Not in Nigeria. There a project is more like a self-contained cruise ship; it has to have its own water supply from a well (called borehole there), its own electrical generators since the country’s electric grid is totally unreliable and even its own sewerage treatment. Since many of the workers don’t have potable water at home, the staff locker rooms need showers.

Culture
Each country has a unique culture. In Sub-Saharan Africa, many countries show strong ties to traditional African culture. Other countries, like Angola, where the colonial influence of the Portuguese lasted longer than in British or French colonies, the culture shows a very strong European as well as Brazilian influence due its Portuguese language. One example of the differences using food is that at an upscale hotel in Ghana, the dinner buffet featured ‘grasscutter palm nut soup.’ A grasscutter, also known as the Greater Cane Rat, can be as large as 20 pounds and is gourmet bush meat. In Angola, the foods reflected its European and Brazilian influence, not its African traditions.

In North Africa, there are significant cultural differences as well. Morocco, although labeled as a Muslim Arab country, has a culture based on its non-Arab Berber tribes and French colonial influence. In fact, many upper income families have two living rooms, one in traditional French style and one in traditional Arab style.

The tribal traditions in Africa influence many considerations affecting design of an entertainment center. Parties can be large. You don’t have birthday parties for a dozen or so children and their parents. Think 150, 200 or more people attending including aunts, uncles, grandparents and other extended family and friends.

Families are often larger. Designing a restaurant with four-seat booths will be a mistake.

Time goes slower in African culture than in the fast-paced West. Parties can last all day. There is wide latitude for what “showing up on time” means. Table turns at restaurants are much slower. Construction goes slower.

Construction Technologies
Construction technologies are often far different than in the West. In some countries, all construction is with concrete, even large buildings. Steel construction has not arrived. Even telephone poles will be made out of concrete. This affects how far you can span between columns. Unlike with steel framing, you can’t have 24 lanes of bowling without some columns between the lanes.

You rarely find stud and drywall construction for interior walls. Think solid concrete block with a plaster finish instead. In Egypt we ran into the need for large vertical chases for drain pipes. However sprinkler and water supply lines didn’t require chases. When we asked why, the only answer we got was drain lines leak but sprinkler and water lines don’t. Having to stack all the drain lines creates constraints on designing floor plans.

Unusual building code requirements can also throw you a curve in many countries.

Sourcing & Custom Duties
Most countries have little in the way of locally manufactured furniture, kitchen and other equipment and building and interior finish materials available, so the majority of everything needed to construct and equip a center has to be imported. This means everything needed has to detailed early in development as it takes months to ship via container and clear customs.

Management
Since there are few if any entertainment management professionals in Africa, setting up management requires bringing in professionals from elsewhere in the world and then learning how to manage within a work culture that can be quite different than their own.

Developing entertainment centers in Africa has its challenges, takes longer and requires more work and patience that in the Western World. If you do your advance homework, location-based entertainment businesses in Africa can be very successful.