Basically, a white space project fills a market opportunity of unmet or underserved consumer needs. Our company is currently fortunate to be working on the development of three completely different white space projects that will fill the sweet spots in three un-served markets. White space projects are exciting, yet challenging, to work on, as they don’t fit within an existing model. They may be a hybrid from different categories in one industry or combine aspects of different industries. Sometimes they create an entirely new industry.

Most white space market opportunities are created by shifting consumer markets, be they demographic, psychographic, cultural, values-oriented or aspirational, to name just a few possible drivers of change and trends. Consumer needs and priorities are in a constant state of flux. Sometimes a very small niche market that is too small to support the rollout of a targeted concept can grow to the needed critical mass to support a new location-based concept. Sometimes the white space was always there, but unrecognized. Then a light bulb goes off in someone’s head and he chases after the opportunity.

For example, in 1977 Noland Bushnell recognized a white space in the location-based eatertainment market for families with young children. He formulated Chuck E. Cheese’s Pizza-Time Theater (now just Chuck E. Cheese’s) and it is still going strong more than 30 years later. Sometimes the white space opportunity is the result of totally reformulating an existing LBE concept for a different market. Cirque du Soleil is one example. It took the old three-ring circus targeting families with children and reformulated it without animals as a sophisticated venue for adults. Bowling lounges, such as Lucky Strike Lanes, are another example. They took the old bowling alley, upscaled it, gave it a lounge atmosphere and targeted young adults. Sometimes consumer markets have to change before the white space becomes evident. Whole Foods Markets and other similar supermarkets are an example of that category. The growth of a large segment of consumers desiring healthy, natural and organic foods made that concept feasible. 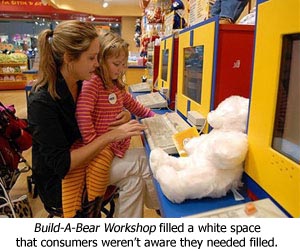 Sometimes white space concepts fill a market void consumers themselves didn’t understand they needed. New availability drives the market growth. Think about Build-A-Bear Workshop. Children and parents wouldn’t have said they needed it before Maxine Clark launched the blockbuster concept in 1997. Some white space concepts emerge before their markets are large enough and basically sit dormant while evolving until the market grows to sufficient size for the concept to expand. The family pizza buffet entertainment center is an example. Although first developed in Victoria, Texas, in 1987, the concept saw little growth outside of the state until this century. Now at least five such chains are expanding centers throughout the U.S. and Mexico.

To create a white space project, you first must identify the white space opportunity in a market in terms of unmet needs and evaluate the size of the potential opportunity. Then you must design a relevant branded concept to target and satisfy the identified opportunity within a financially viable economic model.

Over our 20-year company history, we have worked on the development, branding, design and execution of a number of white space concepts, as well as played a significant role in their evolution. Children’s discovery farms and children’s edutainment centers are two examples. We developed both concepts working with different clients before either concept existed. We also identified two white spaces within the family pizza buffet entertainment center industry and developed the industry’s first discovery play dining room and the first upscale facility for a client.

The three white space projects our company is currently working on are in a segment of the location-based leisure industry, one is a hybrid of eatertainment and enrichment and the third is a location-based agritainment-retail concept. Obviously we can’t let the cat out of the bag on their specifics. However, based on all the research, feasibility, concept development and branding work we have completed, we are really excited about the possibility that all three will be the launch of entirely new and successful concepts.

To accurately evaluate the market potential and perfect a white space model, you must be able to draw on a broad repertoire of experience and knowledge from a wide range of fields and understand how to design and execute original research, as well understand how to interpret that research. Over the past 20 years, our company has conducted countless original consumer surveys and focus groups, and we have gathered applicable research from a wealth of other sources in the hospitality, leisure, children’s education, retail, children’s play, entertainment and restaurant industries. On most white space projects, we conduct original consumer research to flush out issues and test both feasibility and design. It takes a broad experience and knowledge base and substantial research to develop successful white space projects.

Here’s a recent comment from one of our current white space clients:

“You keep affirming our perception that you don’t waste time…and that you really know your stuff…and that we’re fortunate to be working with you.”

At a very initial phase of one of our current white space projects, the principal investor said we moved the project concept “from an amateur to a professional level.”