Randy White, the CEO of the White Hutchinson Leisure & Learning Group, gave the keynote speech at the DNA (Digital Out-of-Home Interactive Network Association) conference held January 21, 2013 in London. This article reports on some of his company’s research that he presented for the first time in his speech. He will be reporting on additional research about community-based entertainment trends at his Amusement Expo Seminar on Wednesday, March 20: ‘The New Reality for FECs, Innovate on Die.”

It is important to understand trends in the location-based entertainment (LBE) industry. Possible short-term trends, which may only prove to be fads, may affect marketing and menu changes. Long-term trends can have a more profound impact, requiring changes to a LBEs concept, brand identity, mix of attractions and even its target market in order to stay successful. To find out how real the staycation trend is in respect to entertainment spending during trips and vacations at LBE venues and whether it is only recession-based or perhaps a much longer term trend, our company decided to dig into unpublished data from the U.S. Consumer Expenditure Survey. The Consumer Expenditure Survey collects information each year on the spending habits of American consumers, including data on their expenditures, income, the number of households making particular expenditures and other household characteristics. The survey is conducted by the U.S. Census Bureau division of the U.S. Bureau of Labor Statistics.

For our analysis, a trip is defined as further than 50 miles from home or on an overnight trip and entertainment spending is defined as fees and admissions at location-based venues including movies, theme parks, concerts, museums, zoos, FECs, plays and similar entertainment-type venues. 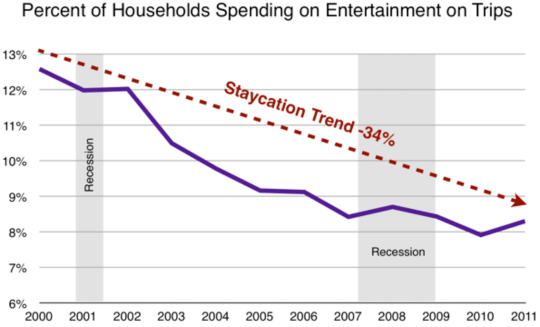 We then examined average household entertainment spending during trips and found the exact same long-term trend (All spending data has been income-adjusted to 2011 dollars.) This time we went back to 1990 to see when the staycation trend might have started, which the data shows was 1997. 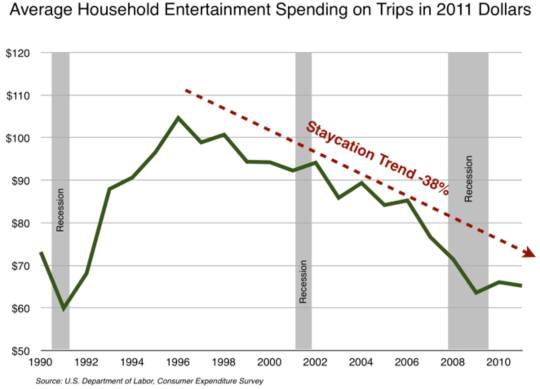 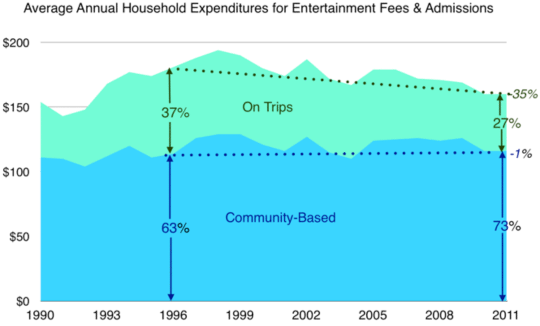 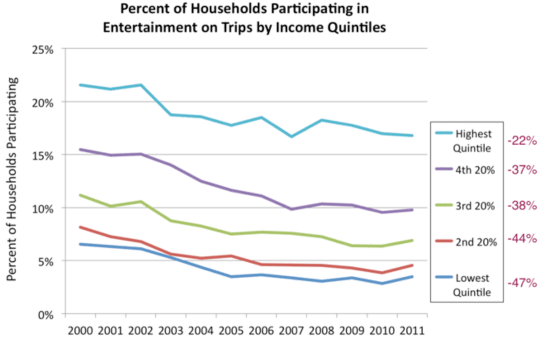 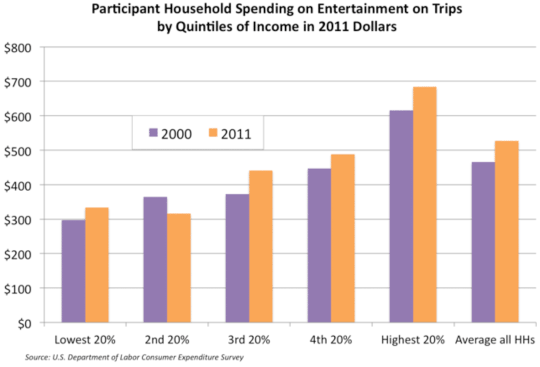 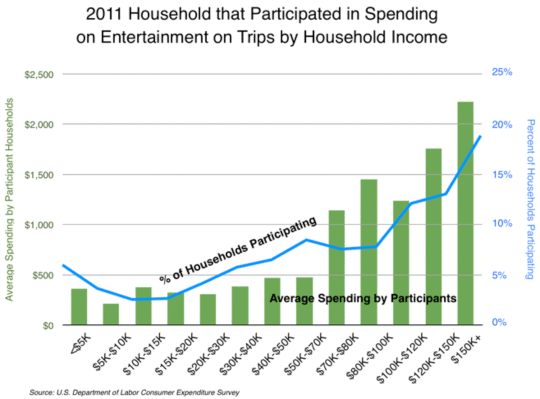 The above analysis examines the staycation trend at the household level. Since 2000, the number of U.S. households has increased by 12%. However that increase does not offset the one-third (-34%) decline in the percentage of participating households spending on entertainment during trips. The total number of households that spent on entertainment each year during a trip declined by one-quarter (-26%) over the eleven year period. 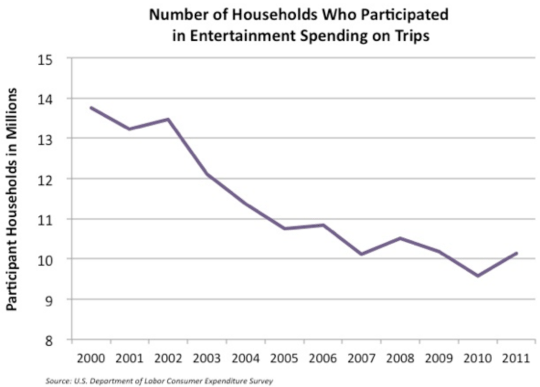 Likewise, the increasing number of US households does not offset the one-quarter (-25%) decline in average household entertainment spending on trips. Total spending by all US households declined by one-sixth (-16%) between 2000 and 2011. 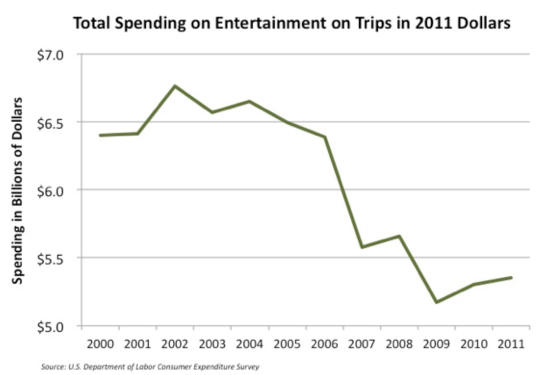 Our research did uncover one trend that LBEs can use to their fine tune their businesses to capture a larger share of this declining spending. It’s called social stratification. An increasingly larger slice of the declining trip entertainment pie is shifting to higher income households. In 2000, the top 20% of income households accounted for 45% of all trip entertainment spending. In 2011, their share had increased by one-sixth (16%) to more than one-half (52%) of all such spending. The higher income households are now the niche market LEB’s must target in order to remain successful.

There is little doubt that the staycation trend is very real; a significant and long-term trend that shows no clear signs of abating. The staycation trend has serious implications for LBEs that depend on entertainment spending by consumers on trips or on vacations. To stay successful, LBEs need to be aware of these trends such and fine-tune their strategies and operations accordingly.

Randy White is the CEO of the White Hutchinson Leisure & Learning Group, a multi-disciplinary firm that specializes in feasibility, concept and brand development, design and consulting for leisure and entertainment facilities. Since 1989, the company has worked for over 460 clients in 31 countries. Randy can be reached at 816.931-1040, ext. 100 or via the company’s Website at www.whitehutchinson.com.