Published in the December 2010 issue of RePlay magazine.

What's Next: The Future is Already Here

You don’t need a crystal ball to see the future. The future is already here. And as Yogi Berra said, “The future ain’t what it used to be.” The issue for most community location-based entertainment centers (LBEs) is that they are still in the past.

We’ve seen a major shift in consumer values, attitudes and spending. The trends started over a decade ago. The Great Recession mainstreamed these trends as well as contributed some new ones, including a new value equation. These changes have and will continue to affect out-of-home entertainment consumption and LBEs for many years to come. Based on our company’s access to extensive research in many consumer industries, as well as some of our own proprietary research, following is a summary of the new consumer landscape we find for LBEs now and in the future and its implications for success.

Migration to the digital world
There has been an accelerating shift from out-of-home real world to digital world entertainment experiences and spending.

People are spending more time in the digital world. They are living large parts of their social lives online. In June 2009, 23% of Internet time was spent on social networks, up from 16% just one year earlier. From 2004 to 2009, time spent at real world social activities or attending out-of-home cultural, entertainment, sporting or recreational events decreased anywhere from 20% to 50%.

There is a significant trend of decline in both participation rates (from 15% to 28%) as well number of events attended (9% to 12%) at just about every type of out-of-home leisure venue, including movies, sporting events and cultural events  (theme parks being an exception). One example is that per capita movie attendance is down by 1/6th since 2002 for all North Americans.

Average inflation adjusted household spending on out-of-home entertainment has basically remained flat since 1999, up just 1%, whereas spending on electronics has seen a 20% increase.

Increasing socio stratification
Spending and attendance on out-of-home entertainment and leisure is shifting to the higher socio-economic households. In 1999, the top 20% of all households by income accounted for 48% of all such spending. In 2009, it had increased to 55%. Spending by all the other household quintiles of income actually decreased since 1999. Households with an Associates or higher college degree now account for 65% of all spending, four percentage points higher than 2000. A large share of the increases came from families with children, who now account for almost 40% of all out-of-home entertainment spending. 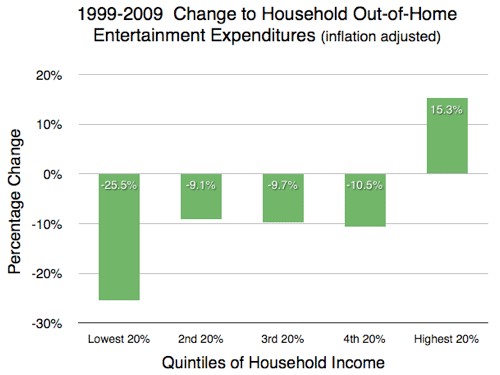 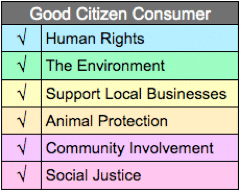 The anxiety from the Great Recession has given birth to the new Grounded Consumer. Their values and priorities have shifted. They desire a simpler, more meaningful lifestyle and place a higher value on family, community and the world as a whole. They are concerned with the environmental, ethical, moral and societal values of companies they do business with. The Grounded Consumer values material possessions less and experiences more, especially ones strengthening their bonds and good times with family and friends. They now spend less time shopping, making more time available for other experiences. When they do spend their time and money, it is a mindful, not mindless decision. The new frugal is now about overall value, not just price. And that value equation now includes doing good when you spend.

The Experience Economy
The experience economy has arrived. Out-of-home entertainment options are plentiful. To attract the Grounded Consumer, stores are offering experiential retail and shopping centers are creating experiences to attract shoppers. During the 2nd quarter of 2010, Apple Stores had more than twice the attendance of Disney World and Disneyland combined. People hang out in their stores for entertainment and social community, not just to buy. Retail-tainment is appearing everywhere. Adrenalina has a FlowRider surfing machine. A new Bass Pro Shop has bowling. Today there are far more entertainment options than people have time for in their hurried lives.

Retail vacancy offers opportunity
20% of the retail space in America is now vacant. The smart shopping centers developers and owners now realize that shopping alone will no longer drive the needed traffic for retailers. They are in search of unique entertainment and restaurant anchors to drive traffic. The lack of available entertainment tenant options has opened the door for all types of entertainment venues, even start-ups, to make very attractive lease deals.

A new paradigm for the future of LBEs
The LBEs we will see prosper in the future will:

The present and future holds great opportunities for LBEs that learn how to embrace the new world order of consumption and align themselves with the new Grounded Consumer.