This article was originally published at Blooloop.com.

Is the staycation trend a real phenomenon?

The word "staycation" is a portmanteau of stay (meaning stay-at-home) and vacation. A staycation (also called a holistay) is a holiday or vacation time during which an individual or family stays and relaxes at home, possibly taking trips to area entertainment and recreation facilities instead of taking overnight trips. Staycations supposedly achieved popularity in the US during the Great Recession and became a popular phenomenon in the UK both due to the recession and the weak Pound making overseas holidays significantly more expensive. Common activities on a staycation include use of the backyard pool, watching movies or playing video games on an in-home entertainment center, visits to local family entertainment centers, amusement parks, museums and zoos and attendance at local festivals and sporting events. As a neologism, the word staycation wasn’t added to the Merriam-Webster's Collegiate Dictionary until 2009.

With as much press as there has been about the phenomena in recent years, we couldn’t locate any research that validated the existence of the staycation trend. In fact, most of the conclusions about its existence have been reached only by citing increased attendance at particular local attractions. During any type of economic times, some attractions do better and some do worse. Could there actually be a selection bias in the reporting due to only looking at those facilities with increased attendance that substantiate the staycation trend and not analyzing comprehensive industry-wide data? If the phenomenon does exist, did the Great Recession cause it or could it be a much longer-term trend? We decided to do some original research to find out. Any findings will have broad implications for the future of out-of-home community-based entertainment venues, that include family entertainment centers (FEC), as well as tourist-type entertainment attractions that are visited on out-of-town overnight trips.

We dug into very detailed expenditure data that the U.S. Bureau of Labor Statistics collects with their Consumer Expenditure Survey (CEX). The nationally representative survey has been conducted since 1980. It questions US households quarterly about their detailed expenditures on more than 600 items and then follows the respondent households for five consecutive quarters. On average, about 7,000 households are questioned each quarter. What we found from our analysis was quite surprising.

Out-of-Home Entertainment Spending
Our analysis found that the staycation trend does exist. However, it was not caused by the Great Recession. It is a much longer-term trend. Between 2000 and 2009, average household spending on CBE only increased 4%; it was basically flat. During the same time however, average household entertainment spending during out-of-town trips decreased by one-third. As a result, CBE spending represented 56% of all out-of-home entertainment spending in 2000, but grew to 66% of all such spending in 2009; i.e., the share of location-based entertainment spending occurring locally increased over time. When we looked at the changes from year to year, we found that the Great Recession did not cause the staycation entertainment trend, although the recession has accelerated it. The trend started much earlier during the past decade and has been becoming stronger ever since. 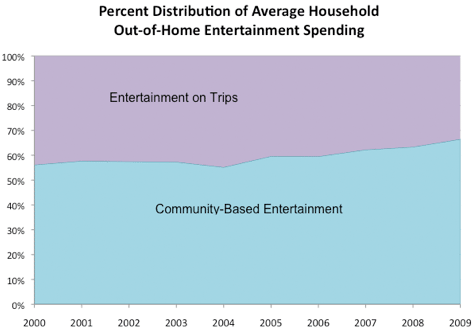 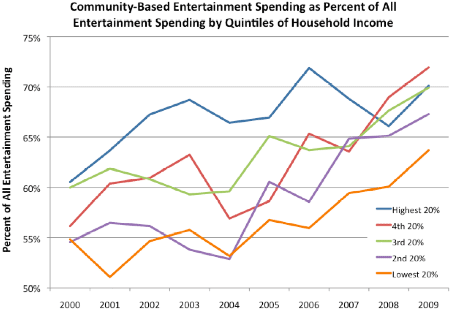 We also examined entertainment spending by different type households and again found that the staycation trend was universal for all types, with the trend starting back in the early 2000s. Entertainment spending on trips has been significantly decreasing for all types of households. Two types of household showed significant CBE spending increases during the decade (17%+) – married couples with no children at home and married couples with children at home, none older than age 17. 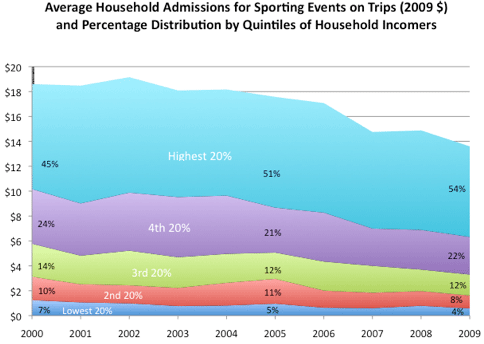 We also examined fees paid to participate in sports. During out-of-town trips it declined by 50% from 2000 to 2009 for the average household, with declines across all incomes. The percent of decline was inverse to household incomes; the lower the income, the greater the decline in spending. During the same ten years, spending on fees for participant sports held in the local area increased 32%, with increases for all incomes except the lowest 20% of households.

Lastly, we analyzed spending for the total of entertainment, admissions to sporting events and fees to participate in sporting events, both locally and on trips. The portion of the spending that occurred on trips decreased from 38% to 25% from 2000 to 2009, again across all incomes and with the greatest decreases for lower incomes.

Social Stratification and CBEs
Our research clearly shows that the staycation phenomenon is occurring and that it is a long-term trend that most likely will continue into the future, with location-based leisure spending on trips continuing to decline as a share of all location-based entertainment spending.

Our analyses also revealed some other trends, one that is somewhat alarming for community-based entertainment. CBE spending has declined as a percentage of all local leisure spending, while sports related spending has increased in share. This is occurring across all incomes. It is the result of average household CBE spending basically remaining flat (+4%) from 2000 to 2009 while spending on local sports admissions and participation fees increased 26%.

Our analyses also confirmed previous research we have written about, the long-term trend of increasing social stratification of out-of-home entertainment and leisure that has been occurring over the past decade, again not caused, although somewhat accelerated by the Great Recession. For entertainment, admission to sporting events and fees to participate in sports, whether locally or on trips, higher income households are accounting for an increasing share of all such spending. In fact, between 2000 and 2009, the lower 80% of households by income decreased in their share of all such spending and only the highest quintile of income households ($94,000+) increased in share. The top quintile of income households were the only ones who increased their spending. It decreased for all other households. 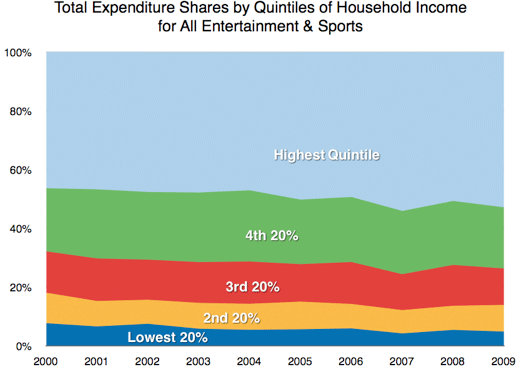 It should be noted that the above seems contrary to data showing increased revenues for many categories of leisure venues on a countrywide basis. That is because we have been examining inflation-adjusted household spending, not total spending by the entire population. Most industries don’t report their spending in inflation-adjusted dollars. So even if household spending remains constant in inflation-adjusted dollars, it will be showing an increase in actual dollars—it takes more 2009 dollars to be equivalent to earlier years’ dollars. For instance a movie or sporting event ticket cost less in 2000 then one in 2009.  But that doesn’t represent real growth. Also, the population is growing, so total spending can grow even if per capita spending is declining. If the combined effect of inflation and population growth exceeds the decline in household spending, industries will show overall growth. Population growth can work to the advantage of vacation-type venues where they can draw on large growing market regions, but it doesn’t grow revenues for the many CBEs in communities with stable populations.

In summary, the news is generally good for community-based entertainment, provided such facilities are targeting the higher socio-economic households that are accounting for an increasing share of local entertainment spending. As they say, “You need to go where the money is.”