An earlier version of this article was first published in the Leisure eNewsletter.

Site selection: a combination of both art and science

Selecting the correct site for a location-based entertainment business is critical to its success. It doesn’t matter whether it’s a family entertainment center (FEC), bowling center, children’s entertainment or edutainment center, or another type of location-based leisure facility; a poor site lasts forever. A poor site will permanently handicap a project's revenues and profits, or worse, result in its failure. Sometimes moving a project as little as one-half mile can have a dramatic impact on its revenues and success. The old adage "location, location, location" is just as true for location-based entertainment projects as for stores, restaurants and other types of consumer businesses.

There are a large number of important considerations in selecting a site for an entertainment center. Some are:

All these characteristics have an impact on whether a site or retail store space is acceptable for the type of entertainment project being considered including how large the trade area will be for the project, the market penetration rate, attendance, per capita sales and as a result, how much revenue the project will produce and its profitability. Gathering the information and data is important, but just as important is the understanding how to interpret it as it relates to the project’s mix, size, attendance, revenues and profitability. 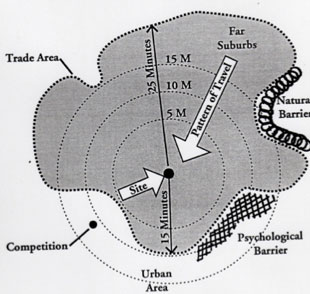 One frequent mistake in market analysis is defining markets by distance rings or concentric circles, such as 5 miles and 10 miles. Consumer behavior isn’t based on “rule-of-thumb” mileage distances. Instead, consumers decide which location-based businesses they will visit based on the exact location, the quality of competition, drive times, their normal travel patterns, traffic congestions, ease of parking, physical and psychological barriers and many other factors. For example, rivers, even those with bridges, create the perception of greater distance, act as a psychological barrier and divide markets. And if there are no convenient bridges, rivers are physical barriers. A site in the normal direction of travel to work and shopping will be perceived as much closer and more convenient than a site that is not in the normal direction of travel.

True trade areas end up being amoeba-shaped and often extend much further in one direction than another. In some markets, the primary trade area might extend a 10-minute drive in one direction and a 25-minute drive in another. In densely developed areas, a 10-minute drive might cover only 2 miles, whereas in less dense areas with few traffic lights and good road access, 10 minutes might extend 6 miles or more. Our company has studied market areas for many existing entertainment facilities. For some, the market area only extended 10 minutes, while we have seen similar entertainment centers in other markets with a market reach of 1.5 hours in one direction and only 15 minutes in another. Defining market areas is both a science and an art, and requires years of experience and know-how. All factors have to be evaluated and weighed by someone experienced in site selection and market feasibility. If the market areas are not accurately defined, all analyses and decisions that follow will be flawed.

It is important to take market penetration into consideration when examining a market area. The further consumers live away from a project, the less the market penetration—the percentage of residents the project will capture and the frequency of their visits. So it is important to understand where the target customers’ residences (and sometimes workplaces and hotels) are located within the market area. Are they close to the site or further away? If the bulk of residents are located near the perimeter of the primary market area versus near the project’s location, the overall market penetration and attendance from the primary market area will be less. One useful way to analyze this is to develop a profile of the target customers and then prepare a market penetration dot density map showing their relationship to the site. A market penetration study dot density map is also an invaluable tool when analyzing a market to determine the optimum site location.

Using socioeconomic-lifestyle (SEL) cluster analysis of a market is a much more reliable and useful tool for guest segmentation analysis than demographics. Demographic data generally only aggregates households and families and does not provide as detailed of an analysis to identify a very specific target market as SEL analysis does. SEL analysis also addresses resident behaviors and values, a more useful predictor of consumer behavior than just demographics. Additionally, participation rates can be obtained for each SEL segment and applied to the market area population to further refine market penetration and attendance projections.

Another important consideration in site selection is cost, whether it’s the purchase price or the rent. The conventional wisdom is that the lower the cost or the lower the rent, the more profitable the project will be. That wisdom is correct, but only if all other characteristics of different sites are identical including the revenues they will produce. However, that is rarely the case. What matters is not the absolute cost, but the relationship between cost or rent and the volume of business.

Often the more expensive site will create the more profitable project, as the project will do more business and/or its development cost will be less. Let's take a look at one example that illustrates these points. We'll use an example from our work with one client.

We were retained by a client to evaluate four potential sites for an entertainment project in a suburban area of a major metropolitan area in the Midwest. The sites ranged in price from $2 per square foot to $5 per square foot. We had determined that the project would require approximately 5 acres, so we were looking at sites ranging in cost from $436,000 to $1,089,000, or a difference of $653,000. That's a serious difference. Three sites were within several miles of each other in one town and the fourth, the lowest priced, was about six miles away in another town.

The first thing we did was evaluate the potential market draw of the sites using a combination of computer modeling of drivetimes and dot density and household income mapping to define probable market areas combined with our knowledge of how market areas are defined by consumer behavior. The lowest priced site, the one farthest away from the other three, had a market area about 25% lower in population than the three in the other town. Furthermore, its location indicated it would have a low market penetration rate for most of the residents in its market area. Translation - the cheapest site would end up being the most expensive in terms of its carrying cost as a percentage of revenue, i.e., that site would have the lowest return on investment.

The three sites in the other town were all well located, at least in terms of proximity to interstate interchanges and other retail. The lowest priced of the three was eliminated since it was hidden from the traffic of major roads. The problem with it was 'out of sight, out of mind', meaning it would have a low awareness factor. Its other problems were poor access and being surrounded by businesses with mediocre images.

That left two sites. The less expensive of the two was near some major retailers, whereas the most expensive was very near the regional enclosed mall and also across the street from a well-known convention center. Location wise, the more expensive site would do the most business. The more expensive site also had one more thing going for it. It was in an office/retail development where all the infrastructure improvements were completed, including utilities and storm water management. The other site would have required infrastructure improvements adding to its ultimate cost. So in the end, the most expensive site won out.

We then proceeded with a formal market study to evaluate its market in greater depth. This included a socioeconomic-lifestyle (SEL) analysis of the targeted customers for the project. Socioeconomic-lifestyle analysis enables you to more precisely understand the market area’s resident and worker population, especially the type of specific customer being targeted. Demographics are useful, but if you are targeting households with children 5-12 or young adults 25-39, demographic income data doesn’t drill down to the same level of detail as SEL analysis, which can get very detailed data on a particular market segment. Furthermore, SEL analysis looks at behaviors and values, a more useful predictor of consumer behavior than just demographics. Our more detailed market study data confirmed our preliminary evaluations and the client optioned the site.

You may still be wondering. How can the site that costs 100’s of thousands of dollars more be the better site? The answer is multifold. First, the project's return on investment will be higher. It will cost the same to construct the building and purchase all the furniture, fixtures and equipment as the other three sites. At the same time, there was site development savings as some of the infrastructure was already in place. So in the end the difference in the land cost equated to only a 3% increase in overall project cost. However, in our market and attendance evaluations, take location will produce revenues at least 15% greater. If you work the numbers, you quickly see how the return on investment will be much greater at that site as the cash flow is far greater than at the lesser expensive sites, more than offsetting the increased land cost. Also, the probability of success is greater. It never makes sense to start a new business with any avoidable handicaps. That is exactly what a less than ideal site brings to a project.

When it comes to leasing a building or store space, the same is true. That is why retailers rent stores in enclosed malls at $50 and more per square versus a strip shopping center that might only cost $15 per square foot. What is important is the relationship of rent to sales, not the absolute rent amount.

Selecting a feasible site for an entertainment project requires a lot of analysis that is a combination of both art and science. The site is forever, so proper due diligence at this early stage in a project’s development can easily determine success or failure.