Defining your target market; it's not about their demographics

Examining national household and total spending data for different types of entertainment, leisure and dining is useful for examining a very broad macro view of the overall U.S. entertainment and leisure market. However, it isn’t something that is helpful in making decisions about who is best to target for a particular project in a particular trade area. 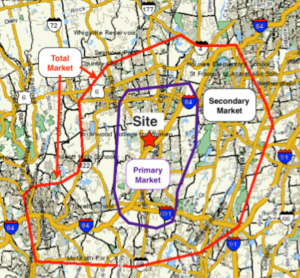 The only thing that matters in that situation is understanding exactly who lives and works in that trade area and defining the largest niche of people to target factoring in the impact of any competition. For example, if the children’s or family entertainment center (FEC) market is pretty well saturated, but there is an adequate-sized void for adult-oriented location-based entertainment, then exactly which adults should be targeted?

This is where demographics fail to provide adequate guidance. Examining the demographics for a particular trade area only gives a very broad indication of the size of any particular niche market. Demographics only lump people in large categories and averages. It’s a little like describing a roller coaster by its average height. You don’t get a clear picture of its characteristics.

Let’s say we want to target adults. You can get the data for the number of adults by age, or the number of households by income, but that won’t tell you exactly how many 25-34 year old adults have $75,000 and higher incomes. And even if we could dig down far enough into the data to extract that information, there can be a wide variety of adults earning $75,000+ in that age range. One could be a 28-year-old single female stock broker with a master’s degree living in a downtown condo, one could be a married 32-year-old trades person with only a high school education, no children and a full-time working wife living in a mid-town apartment and one could be a 34-year-old married banker with a bachelor’s degree, two children ages 4 and 8 and a stay-at-home husband living in a two-story house in the suburbs. The people described above are all quite different people with very different values, likes, needs and spending behaviors.

To really drill down, dissect and quantify a trade area, you need to use a different methodology; one that also predicts peoples behaviors. In market research you can classify people by their socioeconomics—their social, economic and educational status. In a sense, it is about ‘class’, such as blue-collar or white-collar, rich or poor, etc. However, when examining people’s ‘class’, it is far better to also include their lifestyles, values and behaviors into what are called socioeconomic/lifestyles, or SELs for short. SELs allow you to really understand the diversity of any market area.

SELs are a far better predictor of people’s behaviors as consumers than just demographics or socioeconomics. SELs are a way to meet and understand the residents and office workers in the trade area to understand exactly who they are before even opening a center.

SELs are great for understanding the homophily of a trade area, the tendency of people to associate and hang out in places with people similar to them. In simple language, homophily means birds of a feather flock together. People like to be around people with similar social status and values. Homophily is exactly why Starbuck’s attracts a different group of people than Dunkin Donuts.

So if you were planning to open a coffee shop in a trade area, you would want to know whether a Starbuck’s or a Dunkin Donuts would have a larger customer base. That’s where SELs can solve the problem.

The data and information provided by SELs can get quite complex. When conducting feasibility studies for new location-based entertainment (LBE) centers and developing enhancement or turnaround strategies for existing businesses, our company uses an SEL segmentation system that breaks the American population into 66 distinctive groups.

Let’s get back to the adult-oriented LBE in a theoretical trade area. Are there enough adults, both residents and workers, in the trade area to support it? Not all will come considering the impact of homophily, so what segment of adults is largest in number and most compatible? For this illustration, let’s assume there is no competition.

When we dig into the SELs for our theoretical trade area, we find three dominant groups of SELs.

Young Digerati – With upscale incomes and tech-savvy, they live in fashionable neighborhoods on the urban fringe. They are affluent, highly educated, and ethnically mixed, Young Digerati communities are typically filled with trendy apartments and condos, fitness clubs and clothing boutiques, casual restaurants and all types of bars—from juice to coffee to microbrew. All are under age 55 and almost 2/3s are younger than 35. About one-third have children at home.

Money & Brains - Money & Brains seem to have it all: high incomes, advanced degrees, and sophisticated tastes to match their credentials. Many of these city dwellers are married couples with few children who live in fashionable homes on small, manicured lots. They mostly range in age from 35 to 64 and around one-third still have children at home.

New Empty Nests - With their grown-up children recently out of the house, New Empty Nests are composed of upper-middle income older Americans who pursue active—and activist—lifestyles. Nearly three-quarters of residents are over 65 years old, but they show no interest in a rest-home retirement. This is the top-ranked segment for all-inclusive travel packages; their favorite destination is Europe.

When we look at the restaurant, media, automobile and other consumer preferences of the three SELs as well as their values, we find that there is a lot of commonality between Young Digerati and Money & Brains, so we would target them as the primary target market and design the center and its offerings (entertainment, food and beverage, service – the overall experience) for the greatest appeal to them. That doesn’t mean the center won’t also attract some business from New Empty Nests and other SELS. However, also designing for them would dilute the appeal to Young Digerati and Money & Brains and ultimately result in the center doing less business. Trying to appeal to too broad a market only results in having little appeal to anyone. You need to be special to someone to prosper. Many other people will also come, but as a secondary market, not the market you design and operate for.

As you can see from the descriptions of the three SELs, there is demographic diversity within each group. The diversity includes not only age and the presence of children, but also incomes, employment and education. That is why SELs are so powerful a tool for targeting while just looking at demographics isn’t. SELs look at the overall characteristics and behaviors of people rather than just lumping them in the same demographic basket.

SELs are a tool our company uses in all our feasibility research and for all our design and branding work to define who a center and its brand needs to target and all the attributes the center needs in order to successfully attract that target market on a regular repeat basis.

One example of the power of SELs is our experience a number of years ago when we conducted the feasibility study for the expansion of the Paradise Park FEC in Lee’s Summit, MO. After identifying the center’s trade area, we analyzed its SELs and found there were two dominate family groups with children that should be targeted. When we analyzed their food preferences, we found both indexed very high in drinking caffeine-free Diet Coke. This was back in the days when caffeine-free Diet Coke was not very common, especially in restaurants. Shortly after completing the SEL analysis, I was visiting the owner in what was then the former facility’s clubhouse and noticed that the soda fountain selection included caffeine-free Diet Coke. I asked the owner why he had caffeine-free Diet Coke since it was so unusual to find in a commercial facility and he answered that he added it after his customers keep asking for it.

SELS are a powerful tool for developing and operating profitable LBEs. They let you understand exactly who is best to target and what their preferences are.

Randy White is CEO of the White Hutchinson Leisure & Learning Group, a 23-year old Kansas City, MO-based firm that specializes in production, design and consulting for leisure & entertainment venues. Randy can be reached via the company's website www.whitehutchinson.com or at +1.816.931-1040, ext 100.