When will the out-of-home entertainment and arts industry recover?

In my last two blogs, I discussed when we might take off our masks and return to normalcy. Both blogs focused on the roll-out of the Covid-19 vaccines, whether and when we might reach herd immunity, and people’s confidence of not catching the coronavirus when they attended in-person events. However, the coronavirus has byproducts that will significantly impact returning to normalcy, especially for out-of-home entertainment and arts venues. One is the economic struggles and misery so many people are experiencing, as evidenced by the following data.

Nearly six in ten households (58%) reported having difficulty paying usual household expenses in the last seven days, according to the Census Bureau’s Household Pulse Survey for November 11-23. Over one-third (35%) reported it was somewhat or very difficult.

The December 4-7 Axios/Ipsos poll found that nearly half of adults (47%) are currently concerned about their ability to pay their bills.

The Pulse Survey found that nearly 4 in 10 households (39%) were using credit cards, savings, selling assets, borrowing, unemployment insurance and other assistance to meet their expenses rather than regular income sources like those used before the pandemic.

The Harris November 30-December 2 poll found that only one-eighth of households (12%) have not been financially impacted by the pandemic.

11.4% of households in the U.S. might be more than three months behind in rent, according to Moody’s Analytics. Between past due rent, late fees, and unpaid utility bills, Americans may collectively owe $70 billion by January.

The December 4-7 Axios/Ipsos poll found that nearly half of employed adults (46%) were concerned about their job security.

The bottom line is that it could take several years for most households to recover from the pandemic’s adverse financial impacts, even with a recovering economy and employment. As of the end of November, employment still hadn’t recovered to its lowest point during the past Great Recession. It may be years before employment fully recovers. Recovery took over six years following the start of the Great Recession. 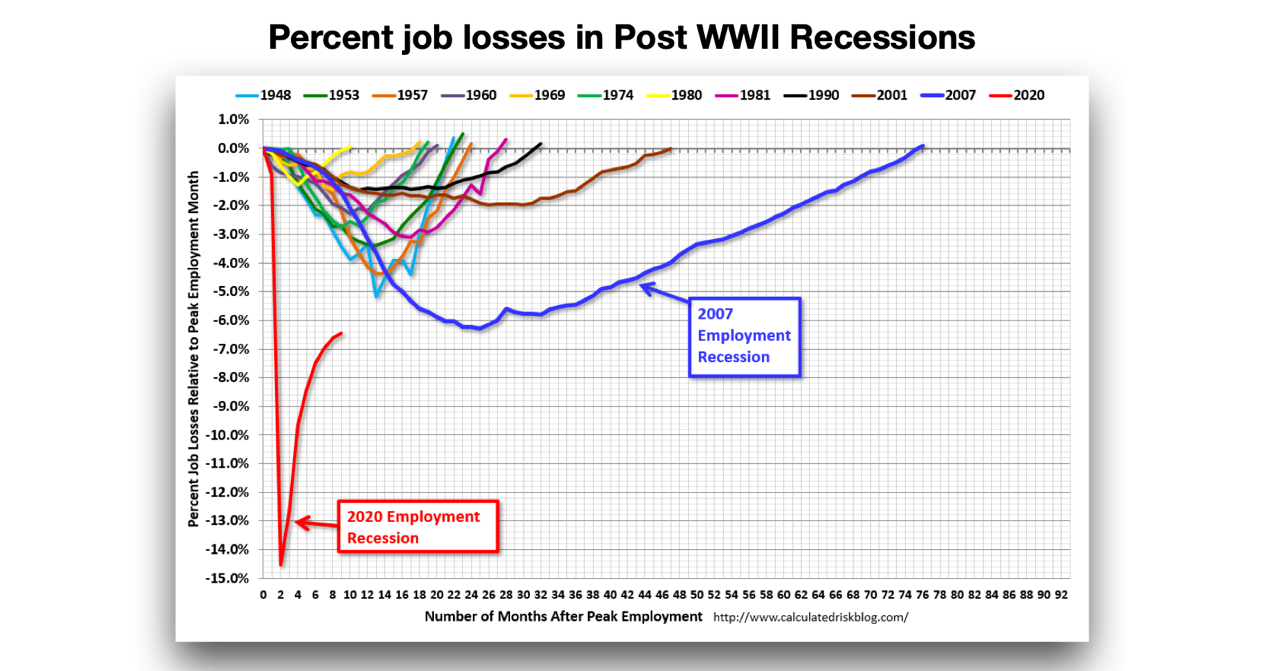 It will take more than just employment for financially impacted households to recover. Many have accumulated considerable debt that has to be paid off; many will need to replenish their savings and retirement funds that were tapped to meet expenses. Some may have permanently reduced earnings, and many more than before Covid will be living paycheck to paycheck. The adverse financial impact on many Americans will be long-term.

As a result, for many Americans, their discretionary spending will be severely limited for many years, causing these financially-challenged households to restrict their spending on discretionary items, including out-of-home entertainment and arts experiences (OOH E&A).

So, when will OOH E&A spending recover? It may never fully recover as the pandemic has caused or accelerated many hometainment habits that likely will displace time previously spent at OOH E&A. The question is, when will OOH E&A recover to its post-pandemic peak potential level?

Right now, OOH E&A activity is very low due to fear of catching the coronavirus as well as the current mandated or elective closures of many venues throughout the country. Dave & Buster’s just reported their results for the third quarter of 2020 ending November 1st. Of their 137 stores, 90 were open by the end of the quarter. Overall, the company’s quarterly comparable-store sales, whether open or closed, were down by two-thirds (66%) compared to the previous year’s quarter. That’s far better than the entire OOH E&A industry, where a larger share of many venues, such as Disney World and almost all live performance theaters, remain closed. I would venture that as a best case, the entire OOH E&A industry is currently operating at only 20% of its pre-pandemic revenues.

Now that vaccinations have started, there will be a recovery, but it will be gradual and come in phases as different groups are vaccinated. There will be some variation based on how each state sets vaccination priorities. Generally, the first people to be vaccinated will be health care personnel and long-term facility residents. This phase is projected to take until mid-January. Next is expected to be essential workers, projected to last into early March. Then will come adults age 65+ and those with high-risk medical conditions. That phase will last until late Spring. These timings assume there will be adequate vaccine supplies and no significant hiccups with the vaccination program. Only then will the general population be eligible to get the vaccine. The general public’s vaccinations for those who agree to get it will probably last until later in 2021. Hopefully, a high enough percentage of age 16+ will be vaccinated to gain herd immunity by early 2022 (assuming immunity is long-lasting, and the vaccine stops vaccinated people from spreading the virus).

Even if the current high rate of infections is brought under control in early 2021 with efforts by the new Biden administration that takes the pandemic seriously at the Federal level and with the vaccination roll-out, there is unlikely to be a significant positive impact on people’s comfort of returning to OOH E&A until starting sometime in the Spring. Many of the people initially getting the vaccine are at high risk due to age or underlying medical conditions. Although the vaccine significantly reduces the risk of getting ill, it does not eliminate it. Its real-world effectiveness will likely be around 90%. So those high-risk individuals will still be wary of in-person public activities, especially most OOH E&A. It will be herd immunity that will make them most comfortable venturing out again.

There is also a group of people who will probably stay away from most OOH E&A until well after when herd immunity is reached. Approximately 3% of the adults live with weakened immune systems (immunosuppressed), and another 3% are highly vulnerable to allergic reactions. That’s roughly 15 million adults. They are unlikely to get vaccinated.

The following graph shows my projection for the return to OOH E&A over the next two years using a base reference revenue of 2019 average household expenditures for fees and admissions to OOH E&A and factoring in all the above considerations, including some long-term adoption to newly developed and accelerated hometainment habits developed during the pandemic.

This projection is an average for all types of OOH E&A venues. Some industry segments and types of venues within different segments will recover faster and to a greater extent than others. Rates will also vary for different parts of the country. Until there is herd immunity and the fear of catching the virus in public is gone, there will be some redistribution of attendance based on the perceived risk of catching the coronavirus, no different than occurred this year after the virus struck. For example, our company has farm agritourism clients who had record-breaking revenues this year due primarily to the belief that outdoor activities in large acreage were low risk. Zoos had better attendance than most indoor cultural institutions, as they are predominately outdoor activities in large areas.

As I discussed in a previous blog, eventually, maybe by 2024, we will get to a 21st Century roaring 20s when OOH E&A will be thriving.

Covid’s adverse economic impacts have disproportionately affected more lower than higher socioeconomic people. Younger adults have also been disproportionately affected, a significant market segment for much of the OOH E&A industry. As the next graph shows, less-educated, lower-income, and younger adults have had much more difficulty paying usual household expenses than higher educated, higher income, and older adults. 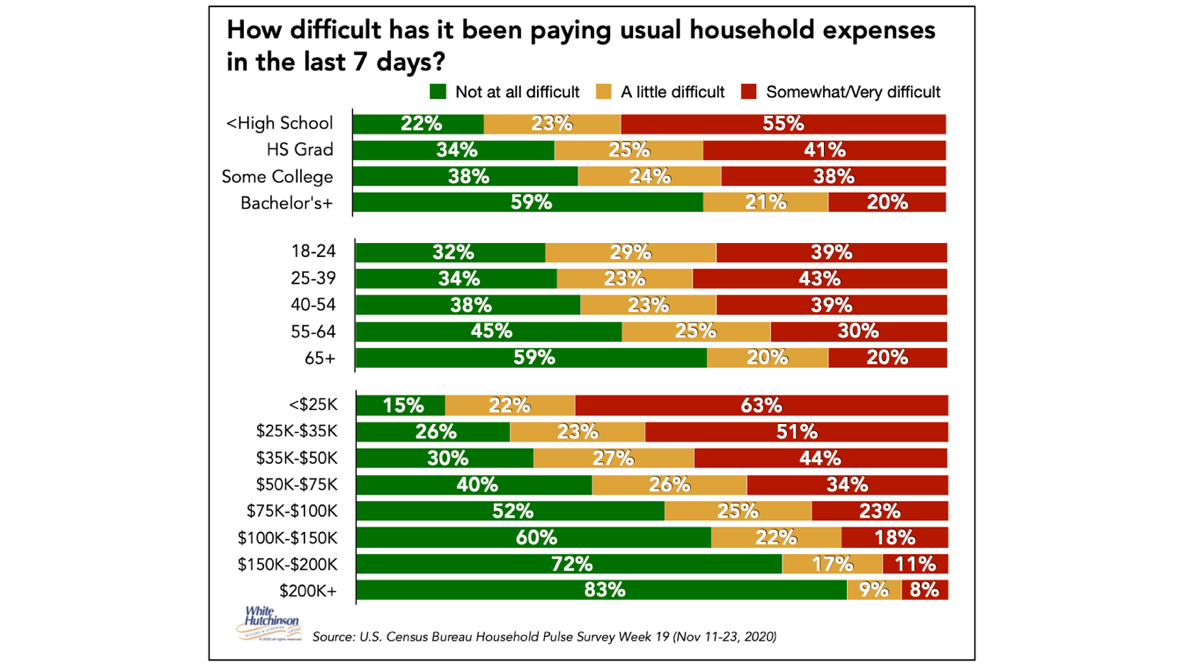 As additional evidence of the growing bifurcation of OOH E&A, the following graph shows the real rate of employment by education calculated by the Ludwig Institute. The rate combines both unemployment and underemployment – the percentage of the U.S. labor force that does not have a full-time job (35+ hours a week) but wants one, has no job, or does not earn a living wage, conservatively pegged at $20,000 a year before taxes (basically $10/hour).

Post-pandemic, there will likely be a continued socioeconomic bifurcation of attendance, with an increasing share coming from higher socioeconomic households. The OOH E&A audience will become more gentrified.

Other factors such as the pandemic’s impact on hometainment and new and accelerated changed values will also be reshaping people’s out-of-home leisure behaviors and the E&A industry’s landscape long-term. As a share of all discretionary leisure time and spending, OOH E&A may never recover to its pre-Covid levels.