When will we be able to take our masks off and return to normalcy? – part 2

In my previous blog, I discussed how it is unlikely until sometime in early 2022 that we will return to normalcy and be able to take off our masks, stop social distancing and feel safe and comfortable returning to school, workplaces, and public places to socialize, party, play, be entertained, shop, exercise, and dine and drink. Before then, there will be a gradual increase in participation from the current low level in the number of people feeling comfortable enough to go to public activities. The increase will probably be prolonged for higher-risk activities, including indoor entertainment and sports venues.

I ended that blog by saying there were several caveats to my predictions, which I would discuss in my next blog. More will follow in my next blog to keep this blog from getting too long.

But before I get into the caveats, I need to update my previous calculations on achieving herd based on new information (the information and science on the coronavirus and the pandemic is evolving almost daily).

Researchers in the U.S. have re-analyzed the data on herd immunity from spring 2020 in Europe. Their study shows that the herd immunity threshold is in the range of 60% to 80% to protect the remaining non-immune population. The research means that a high number of the population needs to become immune by a combination of actually getting infected and recovering from the virus (active immunity) or by vaccination.

The share of the population who have been infected and should have immunity is much greater than the almost 15 million, slightly less than 5% of the population, being reported by the CDC. A recent research study issued November 18th by The Royal Society estimates the actual infection rate in the U.S., reflecting the cases confirmed by testing plus untested asymptomatic and mild symptomatic cases not requiring hospitalization, was 22.8%. Since cases are currently surging and are likely to continue to remain high for several months, in the following calculations, I am increasing the percentage of the population that have or will be infected before vaccination becomes widely available from 20% to 28%.

Here are new calculations of whether we will reach herd immunity at the new threshold range using 60%, 70%, and 80%. 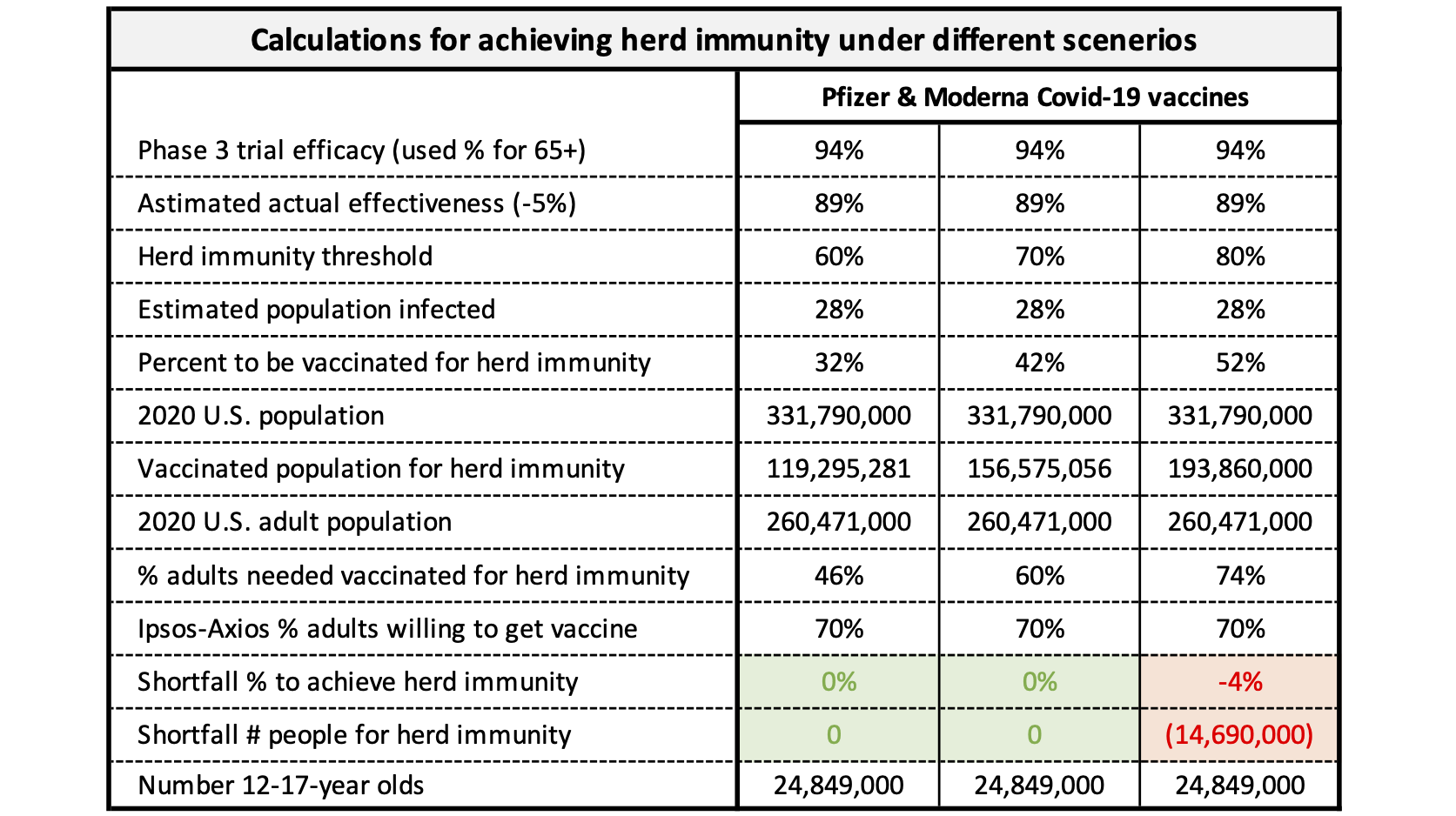 I’ll walk you through the set of calculations in the second column for the Pfizer and Moderna vaccines. In their Phase 3 trials, the Pfizer and Moderna vaccines’ lowest reported efficacy, the percentage of people protected from getting sick, was 94%. However, in real life, the actual effectiveness is typically less, so I used 5% less for an actual effectiveness of 89%. If the herd immunity threshold is 70% of the population becoming immune and 28% of Americans are already immune or will be due to prior infection (also assumes that immunity lasts a long time), that leaves 42% of the population needing to gain immunity through vaccination. That results in 156 million people required to be vaccinated with a vaccine at 89% effectiveness, or 60% of the adult population since there will be no approved vaccine for children until sometime late in 2021. The highest percentage of adults from any poll who report that they are very or somewhat likely to get a Covid-19 vaccine that has been proven safe and effective by public health officials is 70% from the Ipsos-Axios November 20-23 poll (The lowest is 63% from a November 16-29 Gallup Panel poll).

There is a high probability of reaching herd immunity in both the first and second columns. However, as shown in the third column, if 80% of the population needs to become immune for herd immunity and only 70% are willing to get the vaccine, that means we are over 14 million people short of reaching herd immunity. That would require either a higher percentage of adults getting vaccinated or more than half of 12- to 17-year-olds getting vaccinated, which at the earliest might not be until late 2021 after a vaccine for them receives approval.

So, let’s be optimistic and assume that the required herd immunity threshold is achievable. What are the caveats to that occurring and returning to normalcy when people will be comfortable returning to in-person public activities, especially out-of-home dining, sports and entertainment ones? 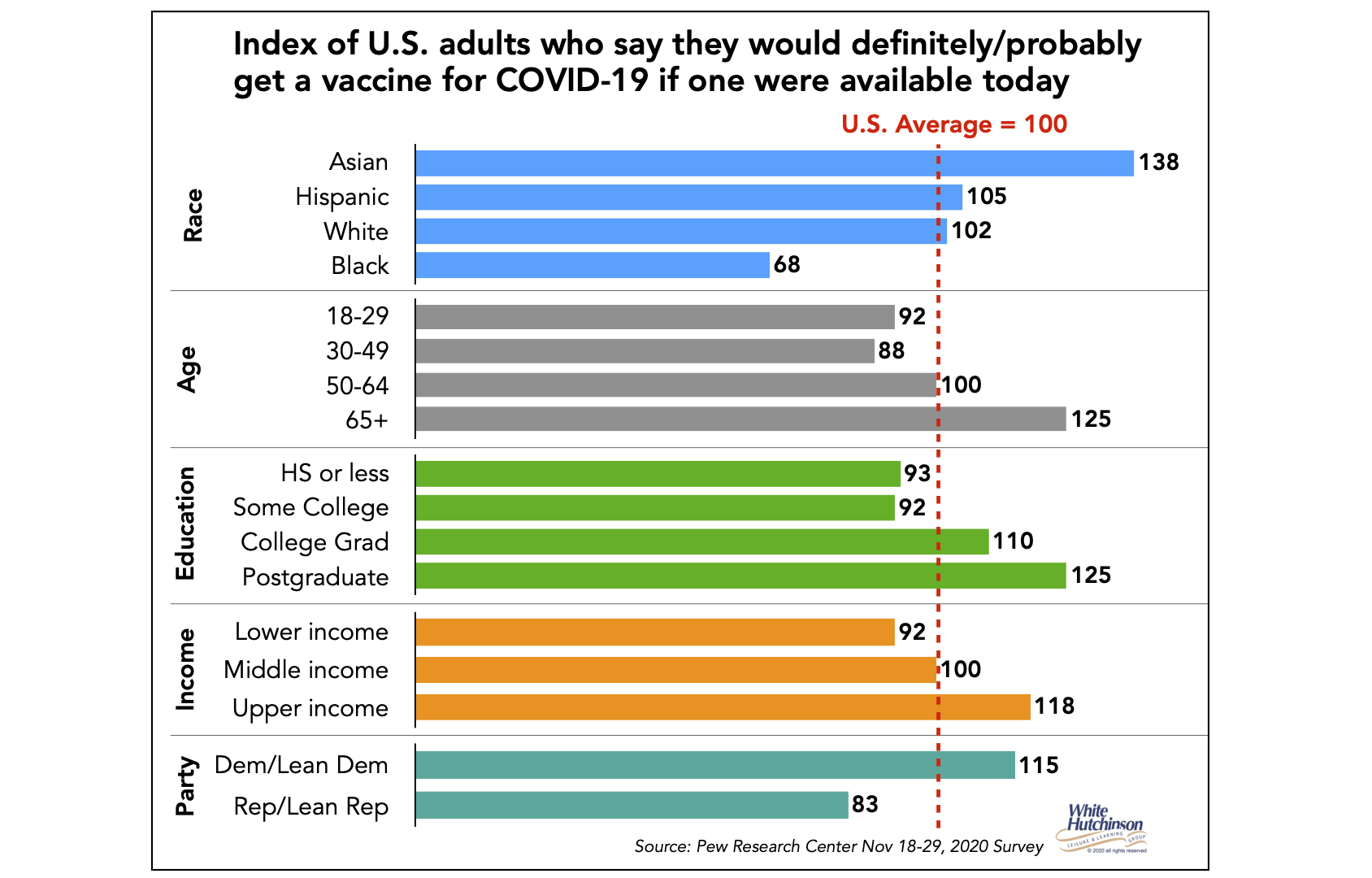 Caveat #2 – There is variation in past adult vaccination rates by state for the flu vaccine. For the past 2019-2020 flu season, it varied from a low of 41.4% in Idaho to 56.8% in Rhode Island. Past history with flu vaccination provides a clue of what is probable for the Covid-19 vaccines. For sure, there will be a range by state of the percentage of adults getting the Covid vaccine.

Caveat #3 – When we look at it at the state and county level, there is a variation based on the percentage of people who have been infected with the coronavirus (technically called Covid-19 seroprevalence). Total to date confirmed case rates as of December 7th per the CDC vary by state from 0.8% in Vermont to 11% in North Dakota.

However, recent research found that Covid-19 seroprevalence rates are much higher, as many cases are mild or asymptomatic and never tested. The research found that in the September 7-24 study period, infection rates varied from a low of 0.4% in Arkansas to a high of 17.0% in New York. There was also variation by age. For example, in New York, the seroprevalence rate varied from a low of slightly more than 1-in-10 for age 65+ (11.2%) to a high of over 1-in-5 for 0-17-year-olds (21.4%). All those rates would be much higher now. 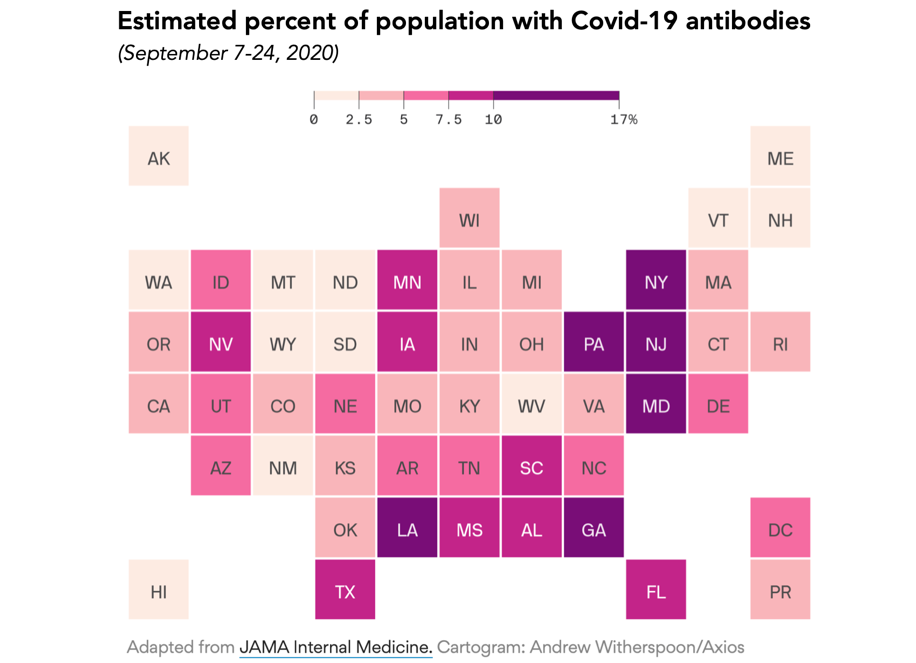 This means there will be heterogeneous paths, even down to the county and city level, to achieve herd immunity since the required threshold percentage is the combination of the immunity rate from prior infection and immunity from vaccination.

Let’s take New York state as an example. It had a high seroprevalence rate of 17% back in September. The state had a high flu 2019-2020 season adult vaccination rate of 48.3% compared to the U.S. average of 45.3%. It also leans heavily Democratic, with 51% identifying as Democrats versus 22% as Republicans. Its high prior infection rate, higher than average propensity to get vaccinated, and the heavy Democrat-leaning means New York state is highly likely to achieve herd immunity and much sooner than most states.

New York is in contrast to a state like Idaho with a low 5.2% prior infection rate, the lowest adult flu vaccination rate of 41.4%, and 54% Republicans versus 14% Democrats. There is the possibility they may never reach herd immunity, or if they do, it will be much later than most states.

Of course, all these numbers for the two states will be different today and going forward, but the differences between the two should continue.

But differences exist at an even more granular geographic level – at the county and city level. So even within one state, parts may reach the herd immunity threshold sooner than other parts, some of which could possibly never achieve the herd immunity threshold. As of December 4th, the known case rates by county in New York vary by a factor of nearly ten from 0.7% in Schoharie County to 6.8% in Rockland County. In Idaho, there was a nearly fivefold variation from 1.9% in Boise County to 9.2% in Cassia County.

Here’s a map from the New York Times that shows the wide variation in known per capita Covid-19 cases of infection at the county level as of December 7th. 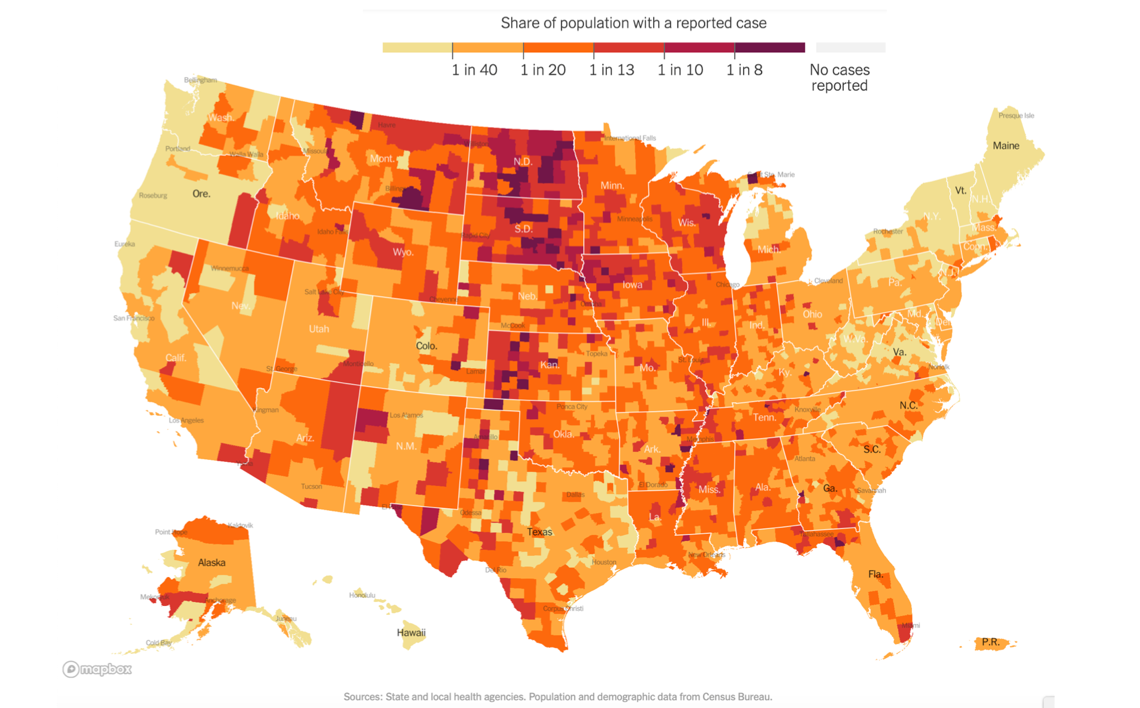 There is no question the rollout of the vaccines will tame the pandemic in the U.S. But if there remain areas of the country where the umbrella of herd immunity doesn’t protect residents, that means the coronavirus won’t be wiped out, but will instead be endemic and still actively circulating, but at low levels, with scattered outbreaks of cases and deaths. That could extend social distancing and mask-wearing well into 2022.

In my next blog, I will discuss an impact of the coronavirus that doesn’t affect when people will feel safe and comfortable about returning to in-person dining, drinking, entertainment, cultural and sports activities, but rather to what extent they actually will and when.