More Evidence of the Digital Disruption of Location-Based Entertainment & Culture

In my blog entries and in our company’s Leisure eNewsletters, we have been reporting on digital technology’s disruption of location-based entertainment and culture, both in time and dollar market share. Since the birth of the smartphone less than seven years ago and the subsequent introduction of mobile tablets, the digital battleground for consumer leisure time has moved from desktops to mobile devices. According to data from Nielsen, in December 2013 the average time spent on smartphones in the U.S. and U.K. exceeded web usage on computer screens. In the U.S., the average monthly time spent per person on the computer screen on the web was 26 hours, 58 minutes compared to 34 hours, 21 minutes on smartphones. In the U.S., monthly smartphone usage is up six hours since December 2012. Pew reports that 58% of U.S. adults now own a smartphone and the percentage continues to grow.

A March 2014 report by Flurry, an app analytics firm, sheds light on exactly how Americans, and I’m sure the Brits, are spending their mobile device time. They found that Americans spend an average of 158 minutes (2 hours, 38 minutes) each and every day on their smartphones and tablets and that 80% of the time is spent on apps. Here’s how that daily time use breaks down. 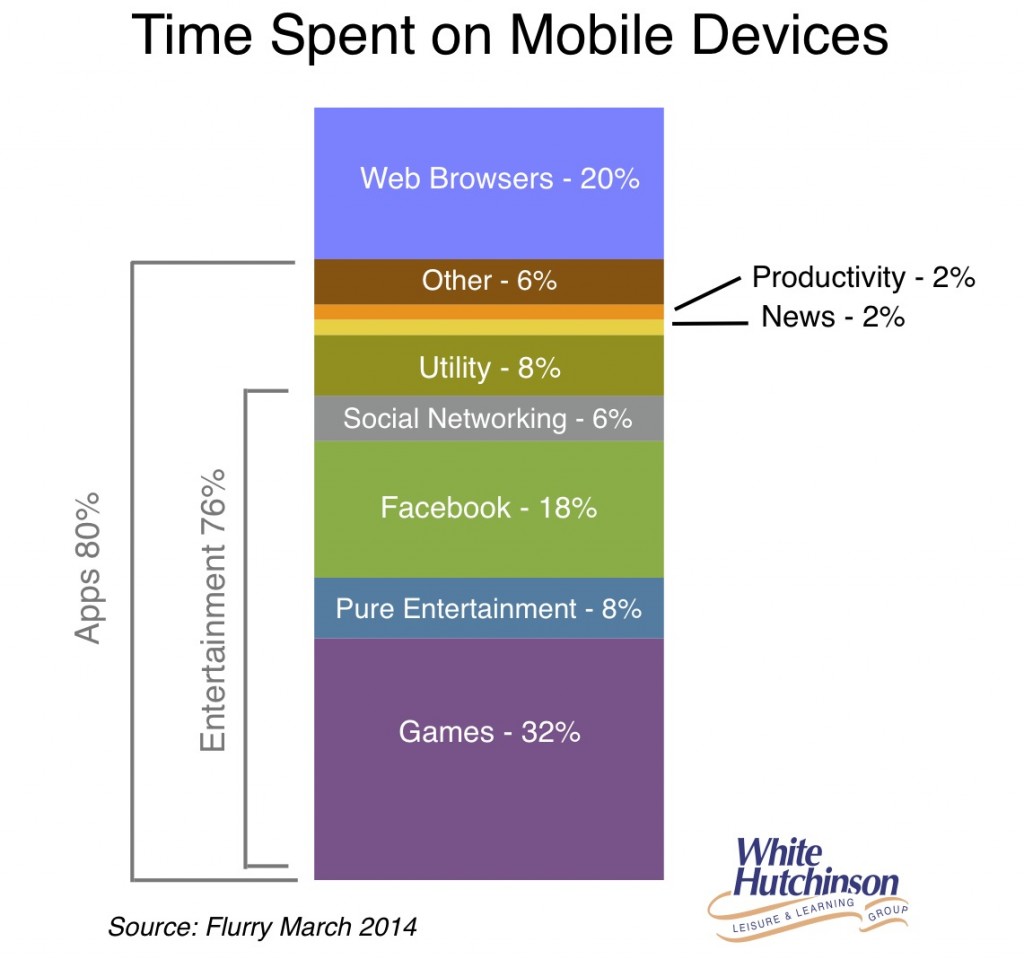 As we reported in our Leisure eNewsletter back in November 2013, we have research from Scott Wallsten from the Technology Policy Institute that shows that online leisure activities are displacing time spent at real world, bricks ’n’ mortar leisure venues.

Our company’s research shows that venues can’t compete with the digital screen experience on price. And they sure can’t compete on convenience. The only way to compete with mobile entertainment and at-home entertainment options is to compete with increased quality for all aspects of the bricks ’n’ mortar experience, or what is called High Fidelity (not music fidelity). The experience has to be so great, such high quality, and to a certain extent, unique, that people are willing to take the time to leave their homes and put down their digital screens to experience it. And you know what is so surprising? For the higher socioeconomic who are the lion’s share of the location-based market, they will pay a premium price for it, as it is a value equation for them based on the use of their limited leisure time rather than their money.

The bottom line message is very simple for location-based leisure venues of all types, evolve to Higher Fidelity or die.