What Is in Your Playground? Think Again About Plastic Grass

Those old tires that were once under your car may now be underfoot as the newest generation of fake grass spreads like, well, crabgrass. But before you decide the fake grass is always greener for use in child care environments, read this cautionary article.

We’ve been using artificial turf for decades. It takes a variety of forms, including rubberized asphalt, playground surfaces and landscape mulches. The original Astroturf fields are beginning to degrade and release alarming amounts of lead into the environment. These fields are being torn up and replaced with the latest fake grass, partially constituted of old tires. Initially, this was touted as an environmentally responsible way to recycle tires. But now, people are questioning the logic behind taking a material considered too risky to dispose of in landfills and using it for groundcover where our children play.  This so called “green” grass is finding its way into the child care market through various playground distributors. The so-called plastic grass is then  filled with crumbs of recycled rubber which can actually be picked out of the lining of the “grass.”

Scrap tires also can be recycled into solid surfaces, as well as used as loose fill where the rubber is simply shredded and dumped around the base of a play structure. Many states and municipalities are putting a halt to the use of tire turf until more studies are conducted to ensure these surfaces are safe.

There are almost no studies on the potential health impacts (especially long-term) of using tire rubber, but preliminary reports have found definitive evidence of potential risk. The California Office of Environmental Health Hazard Assessment (OEHHA), in a January 2007 report, Evaluation of Health Effects of Recycled Waste Tires in Playground and Track Products, found 49 chemicals could be released from tire crumbs. Recycled crumb rubber contains a number of chemicals known or suspected to affect health,  including polyaromatic hydrocarbons (PAHs), phthalates and volatile organic compounds (VOCs). Long-term exposure can lead to neurological damage, carcinogenesis and mutagenesis.

While these findings lead one to believe the material is indeed toxic, manufacturers argue  the toxins are locked in because the rubber is “vulcanized.” Some companies claim the material is indestructible and non-biodegradable, completely safe and nontoxic. Yet at the same time, they admit there is an odor at first (generally considered evidence of the presence of toxic chemicals).  They also claim the dyed rubber is inert. But the last time I picked up blue rubber chips in a playground factory, the dye came off on my hands.  Who knows what these dyes are made of?  Although there are relatively few studies on leaching and health impacts when using scrap tires in these various ways, we can examine the evidence already available from other uses and make assumptions about what it means for children. 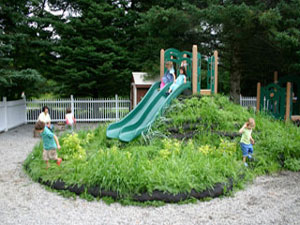 Until we have more sufficient data, it is best to avoid rubber fill products and plastic turf until additional studies can be performed on these materials may affect the health of young children. Opt for the engineered wood fiber for fall surfacing, or try the new Filtrexx Play Systems that utilizes native hardy plants and is approved by ASTM 1292 as a safety surface.  Additional information on this product is at www.filtrexx.com.